Who controls the Media? “We are grateful to The Washington Post, The New York Times, Time Magazine and other great publications whose directors have attended our meetings and respected their promises of discretion for almost forty years. 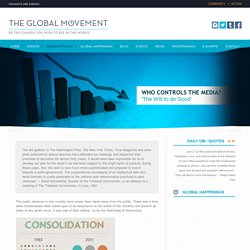 It would have been impossible for us to develop our plan for the world if we had been subject to the bright lights of publicity during those years. But, the work is now much more sophisticated and prepared to march towards a world government. The supranational sovereignty of an intellectual elite and world bankers is surely preferable to the national auto determination practiced in past centuries.” – David Rockefeller, founder of the Trilateral Commission, in an address to a meeting of The Trilateral Commission, in June, 1991.

The public airwaves in this country have slowly been taken away from the public. There was a time when broadcasters were called upon to be responsive to the needs of the citizenry and present all sides of any given issue. Something is wrong here. U.K. NRS: Daily Mail most popular UK newspaper in print and online with 23m readers a month – Press Gazette. UK voters leaning towards Brexit, Guardian poll reveals. Public opinion has shifted towards the UK leaving the EU, two Guardian/ICM polls suggest as the referendum campaign picks up pace – with voters split 52% -48% in favour of Brexit, whether surveyed online or by phone. 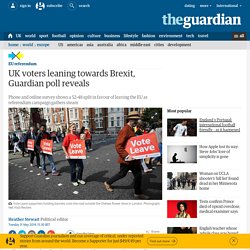 Previous polls have tended to show voters surveyed online to be more in favour of Britain leaving the EU. But in the latest ICM research, carried out for the Guardian, both methodologies yielded the same result – a majority in favour of leaving. “Our poll rather unhinges a few accepted orthodoxies,” said ICM’s director, Martin Boon. “It is only one poll but, in a rather unexpected reverse of polling assumptions so far, both our phone poll and our online poll are consistent on both vote intentions and on the EU referendum.” In the phone poll of more than 1,000 adults, 45% said they favoured leaving the EU, and 42% remaining, with 13% saying they did not know. Using online polling, 47% said they would like to leave and 44% remain, with 9% saying they were undecided.

If so many newspapers back Brexit why will Remain carry the day? Several people reacted on Twitter with sarcasm to the research findings of the Reuters Institute for the Study of Journalism about the bulk of the national press favouring Brexit. 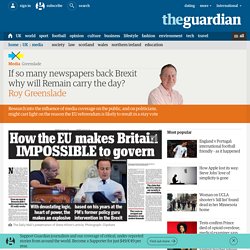 “Don’t hold the front page,” commented one tweeter. “Who’d have thought”, tweeted another. “No shit, Sherlock,” said a third, while a fourth remarked: “I think this could be concluded from... er... reading the papers.” They are correct, of course. But rigorous academic research has confirmed an impressionistic viewpoint. The institute’s final report, which will not be unveiled until September, is likely to show an even greater preponderance of pro-Brexit coverage in the final month of the EU referendum campaign. Take Monday’s newspapers, for example. The Daily Mail ran a front page piece about the decision by Hilton (“David Cameron’s guru”) to declare his Brexit position.

“Last month justice secretary Michael Gove said about one in 20 of the 10,000 foreign criminals in British jails was from Albania.” Stop Racism and Hate Collective. By Yasmin Jiwani As a major institution in society, the media play a critical role. 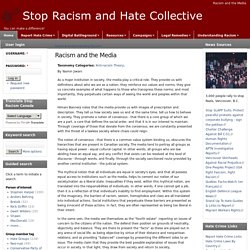 They provide us with definitions about who we are as a nation; they reinforce our values and norms; they give us concrete examples of what happens to those who transgress these norms; and most importantly, they perpetuate certain ways of seeing the world and peoples within that world. a2-level-level-revision, sociology, mass-media-0, ownership-and-control-media. Technological determinism. Technological determinism is a reductionist theory that presumes that a society's technology drives the development of its social structure and cultural values. 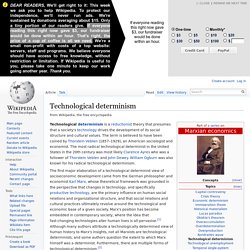 The term is believed to have been coined by Thorstein Veblen (1857–1929), an American sociologist and economist. The most radical technological determinist in the United States in the 20th century was most likely Clarence Ayres who was a follower of Thorstein Veblen and John Dewey. William Ogburn was also known for his radical technological determinism. 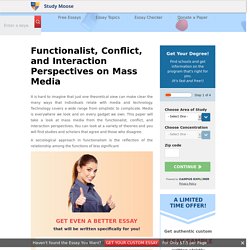 Technology covers a wide range from simplistic to complicate. Media is everywhere we look and on every gadget we own. This paper will take a look at mass media from the functionalist, conflict, and interaction perspectives. Untitled. Mass media essay plan.