Agents of Socialization: Family, Schools, Peers and Media. The socialization that we receive in childhood has a lasting effect on our ability to interact with others in society. 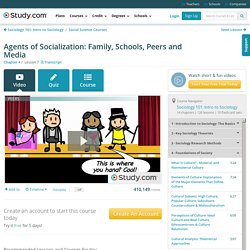 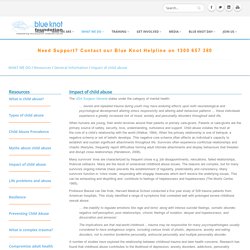 When humans are young, their world revolves around their parents or primary care-givers. Parents or care-givers are the primary source of safety, security, love, understanding, nurturance and support. Child abuse violates the trust at the core of a child’s relationship with the world (Walker, 1994). When the primary relationship is one of betrayal, a negative schema or set of beliefs develops. 20 Facts Everyone Should Know About Gender Bias in Movies. A new study, Gender Bias Without Borders, was released by the Geena Davis Institute on Gender in Media this week. 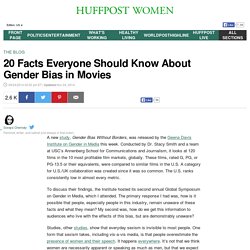 Conducted by Dr. Stacy Smith and a team at USC’s Annenberg School for Communications and Journalism, it looks at 120 films in the 10 most profitable film markets, globally. These films, rated G, PG, or PG-13.5 or their equivalents, were compared to similar films in the U.S. A category for U.S. /UK collaboration was created since it was so common. To discuss their findings, the Institute hosted its second annual Global Symposium on Gender in Media, which I attended. Studies, other studies, show that everyday sexism is invisible to most people. Despite decades of research, it is apparent that we are, as a culture, so used to women being marginal that we don’t even notice. Harper stalker palmer. Harper stalker palmer. Child abuse has many potential negative impacts. Child neglect. 3.2.3 Agents of Socialisation. Socialisation obviously occurs through the interaction with various agents during an individual's personal lifetime and these comprise of the family, the peer group, the school and the mass media among others. 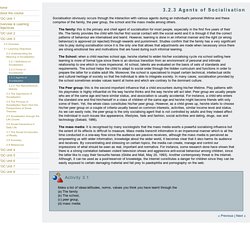 The family: this is the primary and chief agent of socialisation for most people, especially in the first five years of their life. The family provides the child with his/her first social contact with the social world and it is through it that the correct patterns of behaviour are internalised and learnt. However, learning is done in an informal manner and the right (or wrong behaviour) is approved (or rejected) through rewards and punishment. Studies confirm that the family has a very significant role to play during socialisation since it is the only one that allows that adjustments are made when necessary since there are strong emotional ties and motivations that are fused during such informal learning.

What Is a Fully Functioning Person? According to Carl Rogers, a fully functioning person is one who is in touch with his or her deepest and innermost feelings and desires. 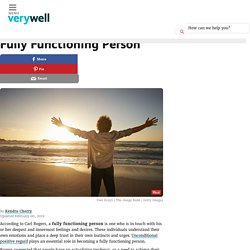 These individuals understand their own emotions and place a deep trust in their own instincts and urges. Unconditional positive regard plays an essential role in becoming a fully functioning person. Rogers suggested that people have an actualizing tendency, or a need to achieve their full potential – a concept that is often referred to as self-actualization. Rogers believed that a fully-functioning person is an individual who is continually working toward becoming self-actualized. This individual has received unconditional positive regard from others, does not place conditions on his or her own worth, is capable of expressing feelings, and is fully open to life's many experiences. Defining the Fully Functioning Person So what exactly constitutes a fully functioning person? "Such a person experiences in the present, with immediacy. Related topics: Media,366009,en.