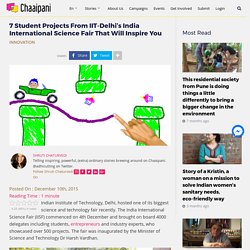 The India International Science Fair (IISF) commenced on 4th December and brought on board 4000 delegates including students, entrepreneurs and industry experts, who showcased over 500 projects. The fair was inaugurated by the Minister of Science and Technology Dr Harsh Vardhan. We bring you a set of interesting projects straight from the heart of the expo. 1. Students from Jharkhand’s Deoghar district showcased a hydraulic crane they designed using syringes. 2. Pupils from Society for Environment and Development exhibited the importance and uses of vermi-composting that has wide uses in agriculture, gardens and nurseries, forests, and soil and water conservation. 3. 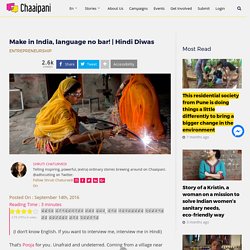 | Hindi Diwas 3.75 (75%) 4 votes हमको अँग्रेज़ी नही आती, अगर इंटरव्यू करिएगा तो हिन्दी में करिएगा(I don’t know English. If you want to interview me, interview me in Hindi) That’s Pooja for you . I remember my first startup pitch presentation at an event in Goa. The reason why I began the article with Pooja’s language preference verbatim, is because I hardly hear such disclaimers.

We are a country which hails of its diverse culture and language background, how we live in harmony despite the diversity. TED Talk Mysore. A tribute to the Water Activist legend of traditional methods of water conservation — Anupam Mishra 3.75 (75%) 4 votes This post is a part of Neer, a collaborative project by DCB Bank and Chaaipani to bring out stories of individuals and initiatives that are working hard and smart to save water. 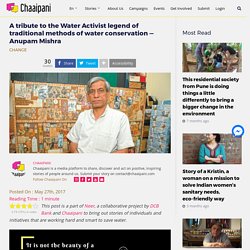 A little poetic, I agree. But in light of such high-paced technological advancement against the crisis we face towards conservation and availability of drinking water, aren’t we supposed to ask ourselves what Shri Anupam Mishra asked in his works. Digital India Quotes. Quotes from India’s Digital Space Rulers at 10th India Digital Summit 4 (80%) 5 votes The 10th India Digital Summit (IDS), hosted by the Internet and Mobile Association of India, wrapped up in Delhi on 9th and 10th of February with a brilliant line of speakers addressing a range of important issues. 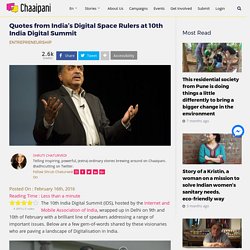 Below are a few gem-of-words shared by these visionaries who are paving a landscape of Digitalisation in India. What are your views and ideas on Digitalising India? The Bada Mangal. Did you know the Big Tuesday (The Bada Mangal) is a Hindu festival started by Muslims? 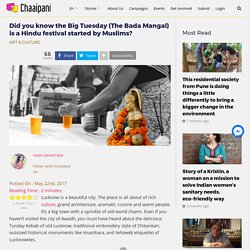 4.29 (85.71%) 7 votes Lucknow is a beautiful city. The place is all about of rich culture, grand architecture, aromatic cuisine and warm people. It’s a big town with a sprinkle of old-world charm. Even if you haven’t visited the city of Awadh, you must have heard about the delicious Tunday-Kebab of old Lucknow, traditional embroidery style of Chikankari, outsized historical monuments like Imambara, and tehzeeb( etiquette) of Lucknowites. Thuni. How this 17 year old boy is doing his bit to boost cottage industry in Southern Rural India 5 (100%) 1 vote “You have to take an interview.” the voice on the other side of the phone said. 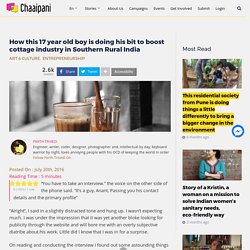 “It’s a guy, Anant, Passing you his contact details and the primary profile” “Alright”, I said in a slightly distracted tone and hung up. I wasn’t expecting much. Dil Pe Mat Le Yaar. Of pocket phone book and making a mark in Indian television & film industry – Harsh Chhaya’s story 4.6 (92%) 5 votes We are talking about this pocket phone book that every wannabe actor in mid-80s would buy from Mumbai local. 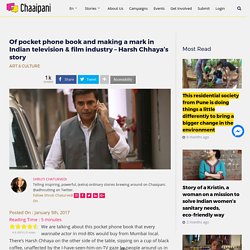 There’s Harsh Chhaya on the other side of the table, sipping on a cup of black coffee, unaffected by the I-have-seen-him-on-TV gaze by people around us in the cafe. “You know, we used to get this small diary in locals which would have phone numbers of some connected people in the Bollywood, who would connect one to more. Rukmini Vijayakumar. A professional techie turned a passionate Bharatnatyam dancer, here is Nitya Narasimhan for you 4.25 (85%) 4 votes “Amma, when is my next dance class? 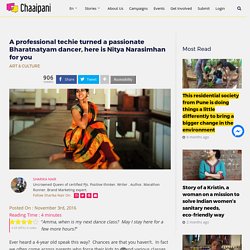 May I stay here for a few more hours?” Ever heard a 4-year old speak this way? Chances are that you haven’t. But Nitya Narasimhan was different, very different. Yoddhas. Would you join us to support the Yoddha who empowered many to give a befitting fight against cancer? 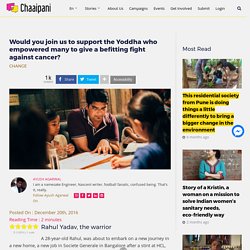 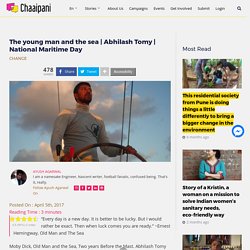 It is better to be lucky. But I would rather be exact. Then when luck comes you are ready.” Moby Dick, Old Man and the Sea, Two years Before the Mast. Doodle Artist India. डूडल, काग़ज़ पर महज़ बेतरतीब लकीरें नहीं, एक फ़नकार की मुकम्मल ज़बान है: सैफ़ 4.79 (95.75%) 113 votes. Dance Movement Therapy. Dancing to the beats of the song that life leaves in it’s wake | Dance Movement Therapy 4.67 (93.33%) 3 votes There are few amongst us who find our true calling in life. Even fewer are those who find some courage and pursue the said calling. Environmental Science. Single handedly built a forest in Uttarakhand this man also gave a solution to fight climate change at the basic level 4.8 (96%) 5 votes This post is a part of Neer, a collaborative project by DCB Bank and Chaaipani to bring out stories of individuals and initiatives that are working hard and smart to save water.

Okay. Relax, take a seat, and listen to the voice in your head while you read this. It’s important that you do. Bharatnatyam Dancer. Environmental Literacy. What is Environmental and Climate Literacy? Hear it from Mallika who’s seen it’s effects first hand in Antarctica 4.67 (93.33%) 3 votes. Earth Day Facts. Here’s are some of our champions that we featured on Chaaipani, who’re here to answer your ‘how’ of change. 4.5 (90%) 4 votes This post is a part of Neer, a collaborative project by DCB Bank and Chaaipani to bring out stories of individuals and initiatives that are working hard and smart to save water. Today is Earth Day. 22nd of April. What that means is, you have to care for Earth and all of it’s elements, think about preserving it.

Maybe throw away plastic tomorrow, use 3 buckets of water just because you can, use chemicals on your farm, but not today. “Understanding is the first step to acceptance, and only with acceptance can there be recovery.” Soumya Gupta. Raja Sen. In the movie, Birdman, the central character, lambasts a critic in a dramatic scene, who is determined to destroy his play in the New York Times review that she is about to write. He lashes out by saying that all critics do is put ‘labels’ to their work and have no real comment on technique, execution or the theatrics of it.

Motivational story of a blind girl.