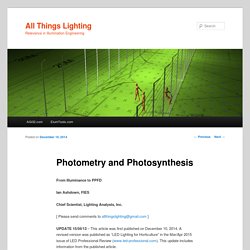 What Is Photosynthetically Active Radiation? Whether you’re a seasoned indoor grower or just starting out, some of the terms and concepts associated with the science of this pursuit can be daunting. 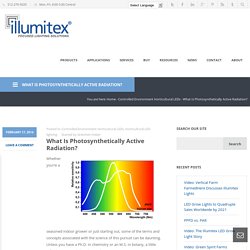 Unless you have a Ph.D. in chemistry or an M.S. in botany, a little refresher now and then doesn’t hurt. One of the most important concepts to understand when growing crops indoors is photosynthetically active radiation — commonly known as PAR — which is the acceptable wavelength range for photosynthesis. L.B.Prikupets & A.A.Tikhomirov - OPTIMIZATION OF LAMP SPECTRUM FOR VEGETABLE GROWTH. International Lighting in Controlled Environments Workshop T.W.Tibbitts (editor) 1994 NASA-CP-95-3309 home | contents OPTIMIZATION OF LAMP SPECTRUM FOR VEGETABLE GROWTH (Short Report) L. 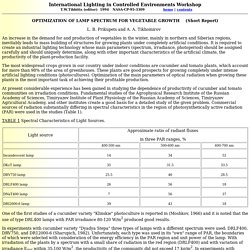 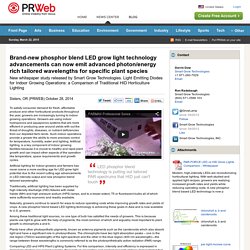 Growers are using indoor hydroponics and aquaponics systems that are more efficient in producing year around yields with out the threat of droughts, diseases, or nutrient deficiencies from our depleted farm lands. PAR - Sunlight. Solar Radiation & Photosynthetically Active Radiation - Environmental Measurement Systems. Chapter Overview What is Solar Radiation? 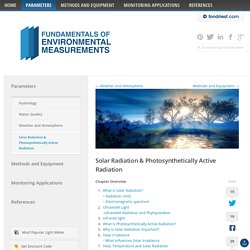 Solar radiation is radiant (electromagnetic) energy from the sun. It provides light and heat for the Earth and energy for photosynthesis. ReefTank123. Now, let's turn to our typical mixed reef system and the available light sources in the hobby. 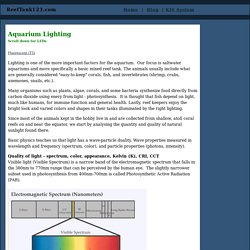 Artificial lighting companies and hobbyists try to mimic mother nature and even try to do her one better. In general, we are looking for at least 100 PAR (or 3000 lux) intensity on the sand bed (bottom of the tank) and the required color spectrum for the animals. Stagger corals by placing them on your live rock aquascape at depths (low/sand bed, mid tank, and high) according to their needs. Higher in the tank for more light intensity. Of course, the height above the water surface of the lighting system will influence PAR values and coverage. Most clams, most SPS corals, and carpet anemones for example require high light intensity. 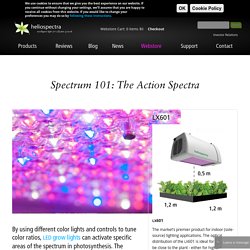 Here we wanted to increase the understanding of the wavelengths plants use for photosynthesis by clarifying the difference between absorption spectrum versus the action spectrum. BIOLOGICAL ACTION SPECTRA. Holly L. 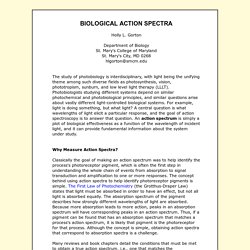 Gorton Department of Biology St. Mary's College of Maryland St. Mary's City, MD 0268 hlgorton@smcm.edu The study of photobiology is interdisciplinary, with light being the unifying theme among such diverse fields as photosynthesis, vision, phototropism, sunburn, and low level light therapy (LLLT). Why Measure Action Spectra? Classically the goal of making an action spectrum was to help identify the process's photoreceptor pigment, which is often the first step in understanding the whole chain of events from absorption to signal transduction and amplification to one or more responses.

Many reviews and book chapters detail the conditions that must be met to obtain a true action spectrum, i.e., one that matches the photoreceptor's absorption spectrum. Representative Action Spectra: Learning from the Classics The earliest action spectrum that survives in today's biology textbooks is Engelmann's photosynthesis action spectrum (Engelmann, 1882; Drews, 2005). B.Bugbee - EFFECTS OF RADIATION QUALITY, INTENSITY, AND DURATION ON PHOTOSYNTHESIS AND GROWTH. 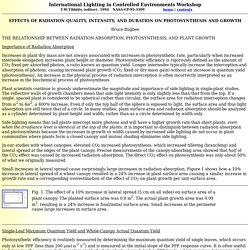 Photosynthetic efficiency is rigorously defined as the amount of CO2 fixed per absorbed photon, a ratio known as quantum yield. Plant scientists continue to grossly underestimate the magnitude and importance of side lighting in single-plant studies. Side lighting means that tall plants intercept more photons and will have a higher growth rate than short plants, even when the irradiance level is identical at the top of the plants. In our studies with wheat canopies, elevated CO2 increased photosynthesis, which increased tillering (branching) and lateral spread at the edges of the plant canopy. Full Spectrum LED Grow Lights.

What are full spectrum LEDs and why should we care? 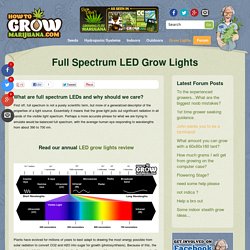 First off, full spectrum is not a purely scientific term, but more of a generalized descriptor of the properties of a light source. Essentially it means that the grow light puts out significant radiation in all bands of the visible light spectrum. Perhaps a more accurate phrase for what we are trying to emulate would be balanced full spectrum, with the average human eye responding to wavelengths from about 390 to 700 nm. Read our annual LED grow lights review Plants have evolved for millions of years to best adapt to drawing the most energy possible from solar radiation to convert CO2 and H2O into sugar for growth (photosynthesis). Smart Grow Technologies. Certain spikes in the green and yellow wavelengths are essential for chlorophyll A and B development as well as the formation of carotenoids, which aid in the process of photosynthesis.

During this process, the plant produces energy from light itself. The leaves of each plant possess many functions that all work together to create the energy that is needed to sustain life. Within the leaves’ cells is energy producing factories called chloroplasts that hold all the chlorophyll, which are the light absorbing pigments. Best LED Grow Lights- Intelligent Gro - Quality LED Lights. What is PAR? PAR or Photosynthetically Active Radiation describes the number of moles of photons in the radiant energy spectral range between 400-700nm which are used by plants to use for photosynthesis.

Plants use all light in this region however some photon wavelengths are used more efficiently than others to drive photosynthesis. (see McCree Curve section). There are a few different measurements when talking about PAR and Photosynthesis which we will cover in the next section. What is the McCree Curve? B.Bugbee - EFFECTS OF RADIATION QUALITY, INTENSITY, AND DURATION ON PHOTOSYNTHESIS AND GROWTH.