Why I Am Not a Maker. Every once in a while, I am asked what I “make.” 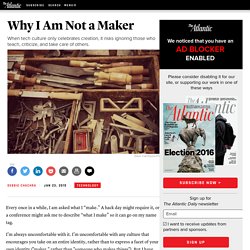 A hack day might require it, or a conference might ask me to describe “what I make” so it can go on my name tag. I’m always uncomfortable with it. I’m uncomfortable with any culture that encourages you take on an entire identity, rather than to express a facet of your own identity ("maker," rather than "someone who makes things"). But I have much deeper concerns. An identity built around making things—of being “a maker”—pervades technology culture. I understand where the motivation for this comes from. But there are more significant issues, rooted in the social history of who makes things—and who doesn’t.

Walk through a museum. Making is not a rebel movement, scrappy individuals going up against the system. It’s not, of course, that there’s anything wrong with making (although it’s not all that clear that the world needs more stuff). I am not a maker. Making in the classroom is a political stance. When I talk about the maker movement in schools I do talk about tools and spaces, but I try to make the point that it’s about giving agency to kids in a system that most often considers students to be objects of change, rather than agents of change. 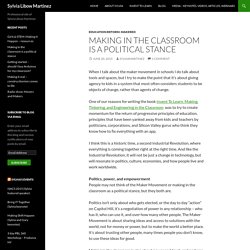 One of our reasons for writing the book Invent To Learn: Making, Tinkering, and Engineering in the Classroom was to try to create momentum for the return of progressive principles of education, principles that have been yanked away from kids and teachers by politicians, corporations, and Silicon Valley gurus who think they know how to fix everything with an app. I think this is a historic time, a second Industrial Revolution, where everything is coming together right at the right time. And like the Industrial Revolution, it will not be just a change in technology, but will resonate in politics, culture, economies, and how people live and work worldwide. And by the way, you can’t have empowered students without empowered teachers. Capture the Learning: Crafting the Maker Mindset. You've heard some good stuff about the maker movement such as how making helps students learn through embodied cognition, creates a mindset that's empowering, and builds creative confidence. 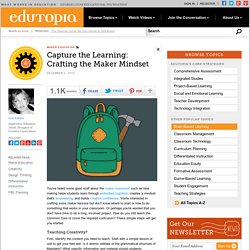 You're interested in crafting some maker lessons but don't know where to start or how to do something that works in your classroom. Or perhaps you're worried that you don't have time to do a long, involved project. How do you still teach the Common Core or cover the required curriculum? These simple steps will get you started. Teaching Creativity? First, identify the content you need to teach. Second, think about the skills that you want students to use and practice. Outside the Skinner Box. Gary S. 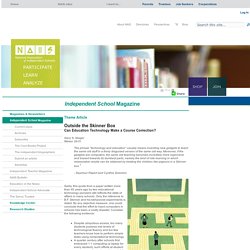 Stager ​The phrase “technology and education” usually means inventing new gadgets to teach the same old stuff in a thinly disguised version of the same old way. Moreover, if the gadgets are computers, the same old teaching becomes incredibly more expensive and biased towards its dumbest parts, namely the kind of rote learning in which measurable results can be obtained by treating the children like pigeons in a Skinner box.1- Seymour Papert and Cynthia Solomon Sadly, this quote from a paper written more than 40 years ago by two educational technology pioneers still reflects the state of affairs in many schools.

Only the reference to B.F. Despite ubiquitous access, too many students possess low-levels of technological fluency and too few teachers know how to perform simple tasks using computational technology.A quarter century after schools first embraced 1:1 computing (a laptop for every student), such efforts at student empowerment remain controversial. Making the Future Vision. Make the Most of the Maker Movement. A surprise arrived in my mailbox last week. 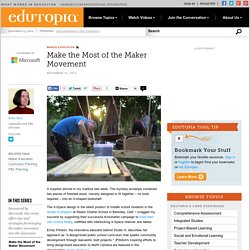 The mystery envelope contained two pieces of finished wood, cleverly designed to fit together -- no tools required -- into an X-shaped bookshelf. The X-Space design is the latest product of middle school students in the Studio H program at Realm Charter School in Berkeley, Calif. I snagged my souvenir by supporting their successful Kickstarter campaign to build their own school library, outfitted with interlocking X-Space shelves and tables. Emily Pilloton, the innovative educator behind Studio H, describes her approach as "a design/build public school curriculum that sparks community development through real-world, built projects.

" (Pilloton's inspiring efforts to bring design/build education to North Carolina are featured in the documentary, If You Build It.) In other words, Studio H students learn by making. The Mindset of the Maker Educator: K12 Online Conference Presentation+Slides.