Kev Pearson sur Twitter : "It was very foggy this morning when I went out...and then it got even more foggy. This is the only glimpse I got of the top of the Tor before it became a real pea souper. #glastonbury #dawn #weather #fog #mist #avalon #landscape. Domenico Calia sur Twitter : "“Firefall” at Horsetail Fall in Yosemite National Park, California, looks like a scene from a fantasy movie. But, it is an ordinary waterfall, which is illuminated by the sunset, that gives it a fiery glow.… Curving access tunnel with elevated walkway in perspective, smooth move TC… Time lapse of Florida □… If you’ve been hearing about the snow in Newfoundland but can’t quite picture it, this is a real time-lapse taken yesterday. This timelapse best depicts the snowfall that parts of Eastern Newfoundland experienced yesterday. Unfathomable.… Did I purposefully replace an outdated version of a paper with a revised one yesterday on the arXiv to advertise my talk tmrw at #JMM2020? Who can say…

I'm a trembling aspen. Are we having an ent-moot?… Greek artist Danae Stratou, Desert Breath (1997) collaborative large scale land art installation (Egyptian desert) covering 25 acres #womensart… In our cities, glass holds ghosts. Windows tired of pollution, the beatings by rain, will sometimes show what the view used to be. A haunting of tree and old brick.… Been down by Greatham Creek.… Daydreaming Eugene de Blaas 1843-1931 @MagicalEurope… Sculptural rock formations and caves photographed over the last few years. From North Wales, the Peak District(photos 2&4)& the Lake District. #photography #geology #travel… Morning Two Rivers,Rocky Mountain National Park,CO #INDIGENOUS #TAIRP… Asher Jay sur Twitter : "Close to the border of #Algeria on my drive here I finally got to listen to my #Desert playlist. There are few songs that make me want to drop all my work & just spin in a trance as “Tiliaden Osamnat” & “Amassakoul ‘N’ Ténéré” by. Word of the day: "micro-season" - in the classical Japanese calendar the year is divided into 72 five-day micro-seasons or kō. Thus 6–10 March is 蟄虫啓戸, meaning "Hibernating insects surface"; 11–15 March is 桃始笑,

Createstreets sur Twitter : "Very good point about Seaside by the wise @RobertKwolek “one of the underappreciated aspects of Seaside is the lack of asphalt. Instead streets have narrow strip of brick, with crushed gravel along edge for parking. Looks grea. Modern #cities in classical watercolour. Check out these stunning intricately detailed paintings of cityscapes by @majatakmaj.

Max Porter sur Twitter : "Lanny is out this week. My love and thanks to the many people who helped it come into being. I’m going to be hiding from twitter but wanted to say thanks for all the responses to the book. I’m profoundly grateful.… Kev Pearson sur Twitter : "I visited ancient woodland yesterday to meet the dawn and I absolutely loved it. Such beauty and peace in nature is hard to beat. #somerset #woodland #dawn #sunrise #winter #landscapephotography #nikonphotography @WoodlandTrust…

'Dragon aurora' dancing over Iceland captured in stunning photo. Get the Mach newsletter. 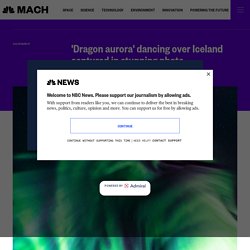 Feb. 25, 2019, 2:53 PM GMT By David Freeman Dragons may be make-believe, but a dragon-shaped aurora borealis that flickered in the sky over Iceland this month was breathtakingly real — just have a look at this dramatic photograph. The photo, taken by Jingyi Zhang on Feb. 6, became NASA's astronomy photo of the day on Feb. 18 and has been widely viewed online since. It shows a swirling green aurora over a dark, snowy landscape where a solitary figure — the photographer's mother — stares up at the sky as if awestruck. An aurora borealis forms when fast-moving charged particles from the sun strike Earth's magnetic field, colliding with oxygen and nitrogen atoms and molecules in Earth's upper atmosphere, exciting them and causing them to release particles of light known as photons. Because these collisions are focused by Earth's magnetic field at the North and South poles, they're most commonly seen in high northern and southern latitudes.