The Baroque World of Rubens as a Kinetic Carousel of the Damned. Mat Collishaw, “All Things Fall” (screenshot by the author via Vimeo) In a colossal carousel of horror, British artist Mat Collishaw and designer Sebastian Burdon reinterpreted the chaotic violence of Peter Paul Rubens’s 17th-century “Massacre of the Innocents” paintings as a 3D-printed zoetrope. 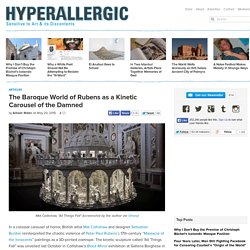 The kinetic sculpture called “All Things Fall” was unveiled last October in Collishaw’s Black Mirror exhibition at Galleria Borghese in Rome, and recently Burdon shared the sculpture in action on Vimeo. According to Burdon, it “took about six months of work and involved creating over 350 character figures, environment elements and architecture.” Burdon has collaborated with Collishaw on giant zoetropes before, such as “The Garden of Unearthly Delights” with 200 figures inspired by the creepy mayhem of Victorian fairy paintings, shown at MAD Museum in 2011. Mat Collishaw, “All Things Fall” (GIF by the author via Vimeo) h/t Stash Artists Create Surreal Miniature Worlds June 21, 2011.

A2 Homage. Proof that Picasso and co are copycats at heart – in pictures. A new exhibition in London lays bare the mystery of inspiration by showing how modern giants from Francis Bacon to Pablo Picasso were influenced by their predecessors. 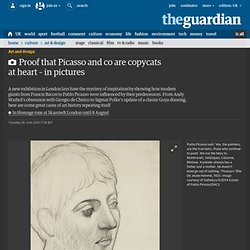 From Andy Warhol's obsession with Giorgio de Chirico to Sigmar Polke's update of a classic Goya drawing, here are some great cases of art history repeating itself • In Homage runs at Skarstedt London until 8 August Pablo Picasso said: 'We, the painters, are the true heirs, those who continue to paint. We are the heirs to Rembrandt, Velázquez, Cézanne, Matisse. A painter always has a father and a mother, he doesn’t emerge out of nothing.' Bacon on Velázquez’s Pope Innocent X: 'I think it is one of the greatest portraits ever made, and I became obsessed by it ... it haunts me, it opens up all sorts of feelings and areas of – I was going to say – imagination, even, in me.'

Women In Art. '‘I’m desperate’', Gillian Wearing OBE. Signs that say what you want them to say and not Signs that say what someone else wants you to say 1992-3Framed colour photographs on photographic paper mounted on boardEach 1220 x 920 mm (48 x 36 ¼ inches)I'm desperate 1992-3Edition 9/10 plus 1 Artist's ProofP78348 Gillian Wearing first attracted public acclaim when she exhibited this series of photographs at City Racing, a small artist-run gallery in London in 1993.

Have a look at the video " subterranean homesick blues" that was made by Bob Dylan, which she used as a sources: – pletchworth

She had been using video and photography since the early 1990s, but this was her first significant collaboration with members of the public. 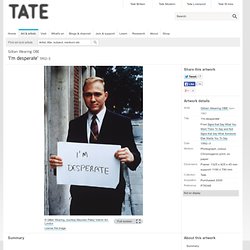 Standing in a busy area of South London, Wearing stopped passers-by and asked them to write down what was on their mind. With their permission, she then photographed them holding their statement. As indicated by the title of the work, Wearing has written that this collaboration 'interrupts the logic of photo-documentary and snapshot photography by the subjects' clear collusion and engineering of their own representation.' Artist Puts 21st-Century Gadgets Into Famous Masterpiece Paintings. EmailEmail Korean Illustrator Kim Dong-Kyu has created a clever and comical series of images on his “Art X Smart” Tumblr that re-imagines old famous masterpieces for the 21st century by introducing modern smartphones, tablets and laptops. 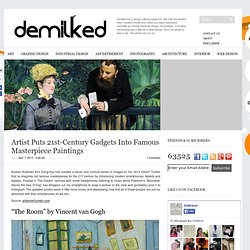 Picasso’s “The Dream” reclines with some headphones listening to music while Friedrich’s “Wanderer Above the Sea of Fog” has whipped out his smartphone to snap a picture of the view and (probably) post it to Instagram. The updated photos seem a little more lonely and depressing now that all of these people are just as absorbed with their smartphones as we are… Source: artxsmart.tumblr.com “The Room” by Vincent van Gogh. What Do The Insides Of Picasso, Dali, Van Gogh Look Like? Remixed Masterpieces: When Artists Pay Homage to Other Artists. Art - Homage on Pinterest. In Homage: The art that influences artists. Tom Hunter flash gallery. 70 Million by Hold Your Horses ! (OFFICIAL MUSIC VIDEO) Remake / Submissions. I will be updating this post with all the submissions to our “Remake” project. 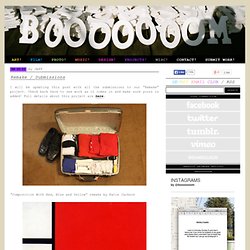