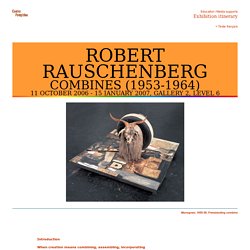 In the early 1950s, Rauschenberg launched his artistic career with series of monochrome paintings in black, white, gold and red, featuring varied textural effects produced by the marouflage and painting of newspaper. As the name suggests, the Combines are hybrid works that associate painting with collage and assemblage of a wide range of objects taken from everyday life.

“It is neither Art for Art, nor Art against Art. A Technical Study of Picasso's Construction Still Life 1914. This technical study helps to explain how Pablo Picasso made one of his earliest cubist constructions, Still Life 1914 (fig.1), what his intentions were and how he achieved them, and how the work has changed with time. 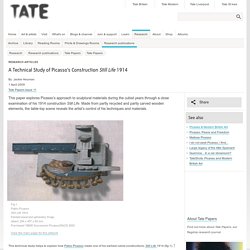 Conservators have published technical studies on Picasso’s paintings, but less attention has been paid to his early sculptures. This article suggests ways in which Picasso controlled his materials to emphasise the basic, almost crude, effect he sought. The artist’s failure or refusal to efface evidence of the way the work came into being gives the impression of hasty or rough workmanship, and at the time Still Life was made, this was unusual, even shocking, in a serious work of art. Picasso, however, left clues that give insight into his working method. Close inspection and analysis of Still Life reveals a level of control in the construction that is not immediately obvious. It is widely acknowledged that these constructions changed the course of modern sculpture. Robert Rauschenberg. Connections. Mikel Frank1280852 Madonna and Child Revisited | 2009 | Mikel Frank | Encaustic collage on board | Collection of the artist1280864 Madonna and Child with Angels | ca. 1300 | Cosimo Rosselli (Italian, Florentine) | Tempera and gold on wood | The Friedsam Collection, Bequest of Michael Friedsam, 1931 (32.100.84)7171024 Madonna and Child | ca. 1485 | Filippino Lippi (Italian, Florentine) | Tempera, oil, and gold on wood | The Jules Bache Collection, 1949 (49.7.10)7581024 Virgin and Child | ca. 1455–60 | Dieric Bouts (Netherlandish) | Oil on wood | Theodore M. 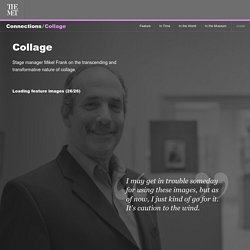 Davis Collection, Bequest of Theodore M. Davis, 1915 (30.95.280)7721024 Madonna and Child | ca. 1420 | Berlinghiero (Italian) | Tempera on wood, gold ground | Gift of Irma N. Mikel Frank1280852 My name is Mikel Frank, and I am the stage manager at the Metropolitan Museum in charge of production. As important to me as my job here at the Museum, is what I do outside the Museum. I'm an artist. Schwitters in Britain. 1 of 5 Schwitters in Britain is the first major exhibition to examine the late work of Kurt Schwitters, one of the major artists of European Modernism. 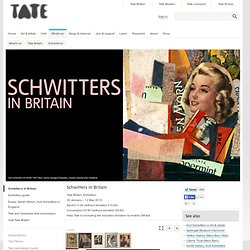 The exhibition focuses on his British period, from his arrival in Britain as a refugee in 1940 until his death in Cumbria in 1948. Schwitters was forced to flee Germany when his work was condemned as ‘degenerate’ by Germany’s Nazi government and the show traces the impact of exile on his work. It includes over 150 collages, assemblages and sculptures many shown in the UK for the first time in over 30 years. Schwitters was a significant figure in European Dadaism who invented the concept of Merz – ‘the combination, for artistic purposes of all conceivable materials’. Schwitters’s escape from Germany took him first to Norway, where he boarded the last ship to leave the country before Nazi occupation. Exhibition highlights include an early example of Schwitters’s unique concept of Merz in the assemblage Merz Picture 46 A.

Chance Creations: Collage, Photomontage, and Assemblage. Many artists were critical of the dominant social structures and political strategies that led to World War I. 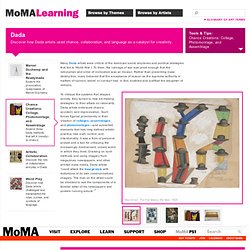 To them, the carnage of war was proof enough that the rationalism and order of civilization was an illusion. Photomontage. Technique by which a composite photographic image is formed by combining images from separate photographic sources. 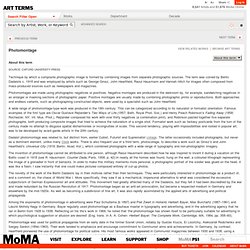 The term was coined by Berlin Dadaists c. 1918 and was employed by artists such as George Grosz, John Heartfield, Raoul Hausmann and Hannah Höch for images often composed from mass-produced sources such as newspapers and magazines. Photomontages are made using photographic negatives or positives. Negative montages are produced in the darkroom by, for example, sandwiching negatives in an enlarger or masking sections of photographic paper. Positive montages are usually made by combining photographic prints or reproductions. Both approaches and endless variants, such as photographing constructed objects, were used by a specialist such as John Heartfield. A wide range of photomontage-type work was produced in the 19th century. Www.alexdaw.com. Art_marking up_13. Collage, Photomontage and Assemblage.