Architecture and stuff of built environments

This is what typical homes from around the world really look like. We often see gorgeous homes and interiors in the movies or in glossy magazines and admire the design that went into these architectural masterpieces. 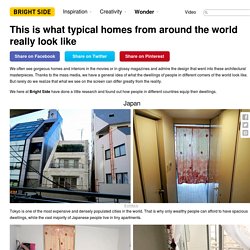 Thanks to the mass media, we have a general idea of what the dwellings of people in different corners of the world look like. But rarely do we realize that what we see on the screen can differ greatly from the reality. We here at Bright Side have done a little research and found out how people in different countries equip their dwellings. Japan Tokyo is one of the most expensive and densely populated cities in the world. Soundcities by Stanza. The Global soundmaps project. Sounds from around the world in an online database of soundmaps. The sounds and noise of cities. Hundreds of city sounds recorded from around the world on soundmaps. The website also has series on onlin. Architect Turns Old Cement Factory Into His Home, And The Interior Will Take Your Breath Away. When Ricardo Bofill stumbled upon a dilapidated cement factory in 1973, he immediately saw a world of possibilities. 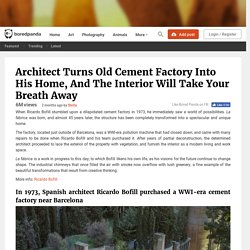 La fábrica was born, and almost 45 years later, the structure has been completely transformed into a spectacular and unique home. Show Full Text. The Perfect Drawing: 8 Sensational Sections That Raise The Bar For Architectural Representation. It has now been more than 20 years since the demolition of Kowloon’s infamous Walled City. 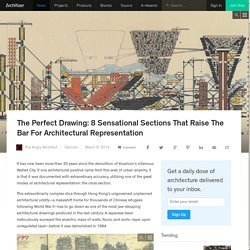 If one architectural positive came from this web of urban anarchy, it is that it was documented with extraordinary accuracy, utilizing one of the great modes of architectural representation: the cross section. This extraordinarily complex slice through Hong Kong’s ungoverned, unplanned architectural oddity—a makeshift home for thousands of Chinese refugees following World War II—has to go down as one of the most jaw-dropping architectural drawings produced in the last century.

A Japanese team meticulously surveyed the anarchic maze of walls, floors, and roofs—layer upon unregulated layer—before it was demolished in 1994. A cross section drawing of Kowloon's Walled City. $10,000 tiny home can be built with a single tool in less than a day - INSIDER. Kowloon large illustrated (1997) ISBN: 4000080709 [Japanese Import]: 9784000080705: Amazon.com: Books.