Domestic Violence Lawyer Denver, Gilpin, Brighton, Jefferson, Colorado. Domestic Violence is a designation in criminal law given to certain crimes when there has been an intimate relationship between the parties involved. 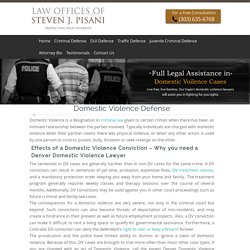 Typically individuals are charged with domestic violence when their partner claims there was physical violence, or when any other action is used by one person to control, punish, bully, threaten or seek revenge on the other. The sentences in DV cases are generally harsher than in non-DV cases for the same crime. A DV conviction can result in sentences of jail time, probation, expensive fines, DV treatment classes, and a mandatory protection order keeping you away from your home and family.. The treatment program generally requires weekly classes and therapy sessions over the course of several months. Additionally, DV convictions may be used against you in other court proceedings such as future criminal and family law cases. The consequences for a domestic violence are very severe, not only in the criminal court but beyond. Why You Need to Hire DUI Attorney Immediately in Colorado (with image) · pisanilaw. Once you are charged of DUI, it can lead to serious consequences. 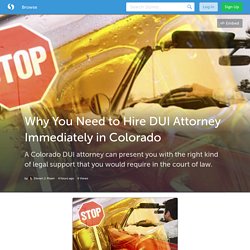 For instance, you may need to go to the jail, even if it is your first time offense. You might even lose your driver’s license for a definite period of time due to a DUI case. There might also be a fine involved for your case. These consequences may also have a major impact later on in your life. Colorado Speeding Laws & Need of Traffic Ticket Attorney ~ Colorado Law Experts - The Law Offices Of Steven J. Pisani. Like any other state in USA, Colorado has its own set of rules when it comes to vehicle speeding. 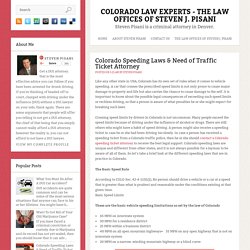 A car that crosses the prescribed speed limits is not only prone to cause major damage to property and life but also carries the chance to cause damage to the self. It is important to know about the possible legal consequences of exceeding such speed limits or reckless driving, so that a person is aware of what penalties he or she might expect for breaking such laws.

Crossing speed limits by drivers in Colorado is not uncommon. Many people exceed the speed limits because of driving under the influence of alcohol or drugs. There are still others who might have a habit of speed driving. The Basic Speed Rule According to COLO Sec. 42-4-1101(1), No person should drive a vehicle or a car at a speed that is greater than what is prudent and reasonable under the conditions existing at that given time. What You Must Do After A DUI Car Accident? ~ Colorado Law Experts - The Law Offices Of Steven J. Pisani. DUI accidents are quite common and can be some of the most serious situations that anyone can face in his or her lifetime. 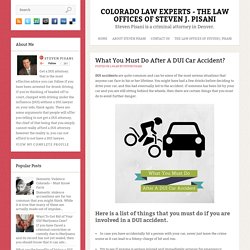 You might have had a few drinks before deciding to drive your car, and this had eventually led to the accident. If someone has been hit by your car and you are still sitting behind the wheels, then there are certain things that you must do to avoid further danger. Want To Get Rid of Your Old Marijuana Case? ~ Colorado Law Experts - The Law Offices Of Steven J. Pisani. If you have faced a criminal conviction or custody due to Marijuana and its record has not yet sealed, then you should know that it can adversely affect your life in several ways. 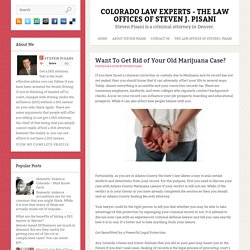 Today, almost everything is accessible and your conviction records too. There are numerous employers, landlords, and even colleges who regularly conduct background checks. A scar on your record can influence your job prospects, boarding and educational prospects. Domestic Violence Colorado – Must Know Facts ~ Colorado Law Experts - The Law Offices Of Steven J. Pisani.

Domestic violence accusations are far too common that you might think. 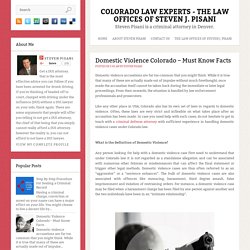 While it is true that many of these are actually made out of impulse without much forethought, once made the accusation itself cannot be taken back during the immediate or later legal proceedings. From then onwards, the situation is handled by law enforcement professionals and prosecutors. Step By Step Procedure For Sealing a Criminal Record ~ Colorado Law Experts - The Law Offices Of Steven J. Pisani. Having a criminal charge, conviction or arrest on your name can have a major effect on your life. 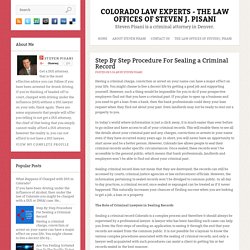 You might choose to live a decent life by getting a good job and supporting yourself. What Happens if Charged with DUI in Colorado? ~ Colorado Law Experts - The Law Offices Of Steven J. Pisani. If you have been driving under the influence of alcohol, then under the law of Colorado you might be charged with a DUI or DWAI case. 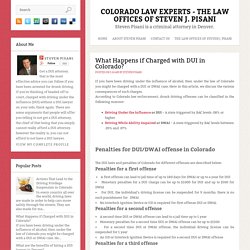 Here in this article, we discuss the various consequences of such charges. According to Colorado law enforcement, drunk driving offenses can be classified in the following manner: Driving Under the Influence or DUI – A state triggered by BAC levels .08% or higherDriving While Ability Impaired or DWAI – A state triggered by BAC levels between .05% and .07% The DUI laws and penalties of Colorado for different offenses are described below: Penalties for a first offense.

Actions That Lead to the Driving Privilege Suspension in Colorado ~ Colorado Law Experts - The Law Offices Of Steven J. Pisani. In every country all over the world, driving laws are made in order to help cars move safely through the streets. 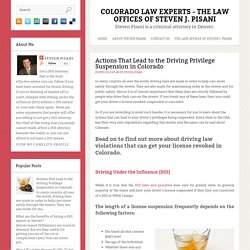 They are also made for maintaining order in the streets and for public safety. Hence it is of utmost importance that these laws are strictly followed by people who drive their cars on the streets. If you break any of these laws, then you could get your driver’s license revoked, suspended or cancelled. So if you are intending to avoid such hassles, it is necessary for you to learn about the actions that can lead to your driver’s privileges being suspended. Every state in the USA has their very own regulations regarding this matter and the same can be said about Colorado. Why Should you Hire a DUI Lawyer? - Expert Coloumn on Colorado Law by Steven.J.PIsani. Have you been recently charged with an allegation of driving under the influence and you are wondering whether you should hire the services of a lawyer skilled in handling such cases or not? 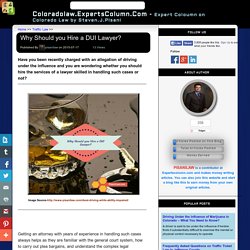 Image Source- Getting an attorney with years of experience in handling such cases always helps as they are familiar with the general court system, how to carry out plea bargains, and understand the complex legal administration procedures. How Criminal Charges Affects Employment & How Sealing of Record is Helpful? ~ Colorado Law Experts - The Law Offices Of Steven J. Pisani. If you are someone who is looking for a job, then having criminal charges can make it very difficult for you to secure employment successfully. Explain In Detail - Minor in Possession of Alcohol Charges and Penalties ~ Colorado Law Experts - The Law Offices Of Steven J. Pisani. As per laws in Colorado, people under the age of 21 are not permitted to either have alcohol with them or even drink it. The minor in possession (MIP) laws have been created so as to stop underage drinking. In case a 21-year old is found in possession of alcohol, or if he or she has alcohol in his or her body or in his or her vicinity, then the officers can ask that person to take a breath control test in order to determine if he or she had alcohol or not.

Drinking and Possession of Alcohol In case people are found violating the above mentioned law, then they will be subject to punishment to the extent mentioned by the laws in Colorado. These minor in possession Colorado laws are rather strict. This time the fine will be 1000 dollars at the most and the person will be sentenced to a year in jail. Hit & Run or Failure to Give Information Laws in Colorado. Hit and run laws in Colorado are also referred to as stop and give aid laws. As per these laws, drivers who are involved in some or the other form of collision need to stop, identify themselves, and provide all the assistance that may be required of them.

Marijuana Laws in Colorado – All you Need to Know. The possession, distribution and sale of marijuana is regulated by the state law as well as the federal law. In the state of Colorado, marijuana is treated as a controlled substance.However, in 2012, the Amendment 64 rendered it legal under some specific state laws that adult men and women (i.e.

Category Of Cases That Can Be Sealed In Colorado ~ Colorado Law Experts - The Law Offices Of Steven J. Pisani. Records of criminal court cases are generally accessible by the public. This means that anyone who wishes to gather information on a person’s criminal past, i.e. has access to his or her arrest records, conviction records or charge records, can do so by visiting the local courthouse. However, certain states in the US offer people with the option of hiding or destroying their criminal records, so that they cannot be accessed by others. Expungement and sealing of records are two methods in which a person’s criminal record can be removed from being accessed by another individual. While the terms “sealing” and “Expungement” of records are frequently used interchangeably, there are certain differences between the two.

Sealing of records refers to a process wherein the court records are present, but they are hidden from public view. Penalties for Assault and Battery in the State of Colorado.

Related:  USA Torture and Crimes Against Humanity   -  Surveillance (EN)   -  Civil Asset Forfeiture   -  A Citizen's Rights in the US of A   -  Education   -  Enterprise