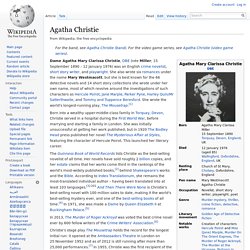 She also wrote six romances under the name Mary Westmacott, but she is best known for the 66 detective novels and 14 short story collections she wrote under her own name, most of which revolve around the investigations of such characters as Hercule Poirot, Jane Marple, Parker Pyne, Harley Quin/Mr Satterthwaite, and Tommy and Tuppence Beresford. She wrote the world's longest-running play, The Mousetrap.[1] Born into a wealthy upper-middle-class family in Torquay, Devon, Christie served in a hospital during the First World War, before marrying and starting a family in London.

She was initially unsuccessful at getting her work published; but in 1920 The Bodley Head press published her novel The Mysterious Affair at Styles, featuring the character of Hercule Poirot. This launched her literary career. Life and career[edit] Death[edit] Lit Lovers Reading Guides. The Guernsey Literary and Potato Peel Pie Society by Mary Ann Shaffer and Annie Barrows. Fiction - Historical; Fiction - Literary; Fiction - Contemporary Women Dial Press Trade Paperback | Trade Paperback | May 2009 | $15.00 | 978-0-385-34100-4 (0-385-34100-8) Celebrating literature, love, and the power of the human spirit, The Guernsey Literary and Potato Peel Pie Society is the story of an English author living in the shadow of World War II—and embarking on a writing project that will dramatically change her life. 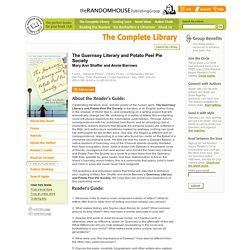 Unfolding in a series of letters, this enchanting novel introduces readers to the indomitable Juliet Ashton. Through Juliet’s correspondence with her publisher, best friend, and an absorbing cast of characters, readers discover that despite the personal losses she suffered in the Blitz, and author tours sometimes marked by mishaps, nothing can quell her enthusiasm for the written word. One day, she begins a different sort of correspondence, responding to a man who found her name on the flyleaf of a cherished secondhand book. 1. 2. 3. 4. 5. 6. 7. 8. 9. 10. 11. 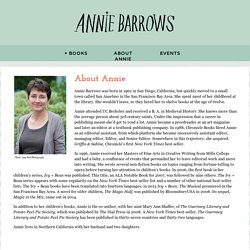 She spent most of her childhood at the library. She wouldn’t leave, so they hired her to shelve books at the age of twelve. Annie attended UC Berkeley and received a B. A. in Medieval History. In 1996, Annie received her Masters of Fine Arts in Creative Writing from Mills College and had a baby, a confluence of events that persuaded her to leave editorial work and move into writing. Pam Jenoff. Author Jacqueline Winspear. James Runcie. Anne Perry. Anne Perry (born 28 October 1938 as Juliet Marion Hulme) is an English author of historical detective fiction, best known for her Thomas Pitt series and William Monk series. 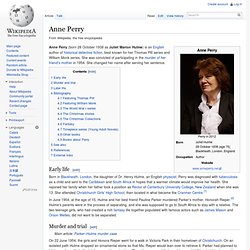 She was convicted of participating in the murder of her friend's mother in 1954. She changed her name after serving her sentence. Early life[edit] Murder and trial[edit] On 22 June 1954, the girls and Honora Rieper went for a walk in Victoria Park in their hometown of Christchurch. Parker and Hulme stood trial in Christchurch in 1954 and were found guilty on August 29 of that year. Parker and Hulme are not believed to have had any contact since their trial.[4] These events formed the basis for the 1994 film Heavenly Creatures, in which Melanie Lynskey portrayed a teenage Pauline Parker and Kate Winslet portrayed teenaged Juliet Hulme.

Although many presumed Hulme's and Parker's relationship to be sexual, Perry stated in 2006 that, although the relationship was obsessive, the two were not lesbians.[4] Later life[edit] Charles Todd. Reading Group Guide-Discussion Questions for A Fine Summer's Day. The final review, discussion questions & answers for Booktime with Bess: An Unmarked Grave. (Please click on the book’s cover image for a great book trailer for An UnMarked Grave!) 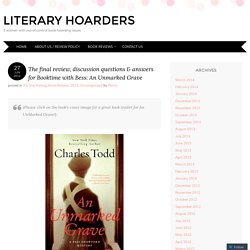 Well, here we are, at the end of the Book Club Girl’s final book in the Bess Crawford series! We read 4 books already? The time went by so quickly. Thank you to Jennifer @bookclubgirl.com for organizing this wonderful read-a-long! This was my very first foray in to participating in a read-a-long and I thoroughly enjoyed. So wrapping up, I must say that in the 4-book series, my very favourite was A Bitter Truth (#3 in the series). Now, on to the discussion questions and my answers to them: 1) In each of the previous books in the series, we saw Simon Brandon take on a increasingly bigger role in investigating crimes with Bess and in this book, the Colonel and Bess’ mother are also actively involved in her search for the killer.