How To Find and Friend Your Influencers. Let’s face it, there are a lot of experts in this world of ours, and the field of social media is no exception. 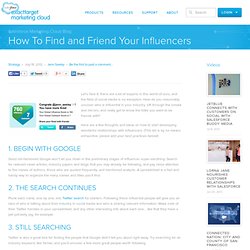 How do you reasonably uncover who is influential in your industry, sift through the smoke and mirrors, and really get to know the folks you want to be friends with? Here are a few thoughts and ideas on how to start developing wonderful relationships with influencers. Tools for finding influencers. A comparison of the three most popular influencer finding tools: Klout, Kred and Peerindex As social networks continued to grow rapidly, so has interest in influence. 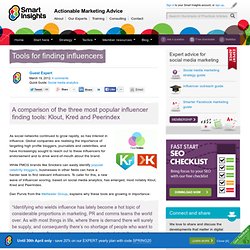 Global companies are realising the importance of targeting high profile bloggers, journalists and celebrities, and have increasingly sought to reach out to these influencers for endorsement and to drive word-of-mouth about the brand. Can’t Afford Kim Kardashian? Try a Micro-Influencer Instead. Forget Kim Kardashian: How to Find the Right Micro-InfluencerBrands no longer need to rely on high-priced celebrity endorsements. 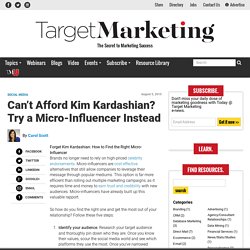 Micro-influencers are cost-effective alternatives that still allow companies to leverage their message through popular mediums. This option is far more efficient than rolling out multiple marketing campaigns, as it requires time and money to earn trust and credibility with new audiences. Micro-influencers have already built up this valuable rapport. So how do you find the right one and get the most out of your relationship? Follow these five steps: The rise of 'micro-influencers' on Instagram. There’s such a thing as being too popular. 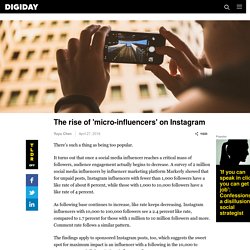 How Instagram Micro-Influencers Are Changing Your Mind One Sponsored Post at a Time. If you have yet to hear the term ‘micro-influencer,’ then you’re probably steering clear of the digital world. 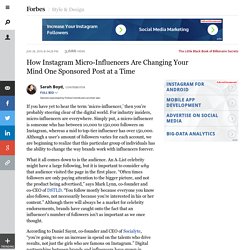 For industry insiders, micro-influencers are everywhere. Simply put, a micro-influencer is someone who has between 10,000 to 150,000 followers on Instagram, whereas a mid to top-tier influencer has over 150,000. Although a user’s amount of followers varies for each account, we are beginning to realize that this particular group of individuals has the ability to change the way brands work with influencers forever. What it all comes down to is the audience. An A-List celebrity might have a large following, but it is important to consider why that audience visited the page in the first place. Something Social – the buzz on social media marketing. Product placement w video w sieci. YouTube Is Expanding From Video to Basically All Social Media. YouTube doesn’t want their users leaving for other social networks like Facebook or Twitter. 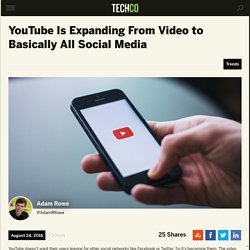 So it’s becoming them. The video service has just revealed plans to add photos, polls, links, and text to its video feed by the end of 2016. The new expansion, called YouTube Backstage, will first be available only to select YouTubers and in a basic version. The Rise Of The Micro-Influencer. “Brands are literally dying looking for content that’s a bit more authentic” says Mona Akhavi, Founder and CEO of Sidebuy, the Canadian-based data-driven platform that connects brands with over 10,000 influencers & bloggers across 150 cities in North America and the UK. 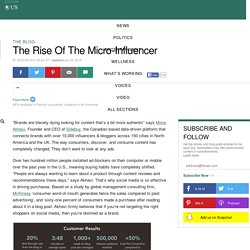 The way consumers, discover, and consume content has completely changed; They don’t want to look at any ads. Over two hundred million people installed ad-blockers on their computer or mobile over the past year in the U.S., meaning buying habits have completely shifted. “People are always wanting to learn about a product through content reviews and recommendations these days,” says Akhavi. That’s why social media is so effective in driving purchases. Based on a study by global management consulting firm, McKinsey ‘consumer word-of-mouth generates twice the sales compared to paid advertising’, and ‘sixty-one percent of consumers made a purchase after reading about it in a blog post. The rise of 'micro-influencers' on Instagram. How 'Micro Marketing' Can Create Macro Results for Your Brand. Global ad spending is predicted to reach reach $662.73 billion by 2018. 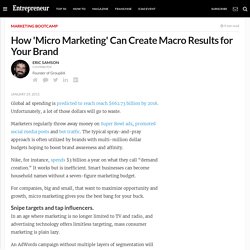 Unfortunately, a lot of those dollars will go to waste. Marketers regularly throw away money on Super Bowl ads, promoted social media posts and bot traffic. The typical spray-and-pray approach is often utilized by brands with multi-million dollar budgets hoping to boost brand awareness and affinity. Nike, for instance, spends $3 billion a year on what they call “demand creation.” It works but is inefficient. A Startup's Guide to Micro-influencers. Celebrity influence doesn’t come cheap. 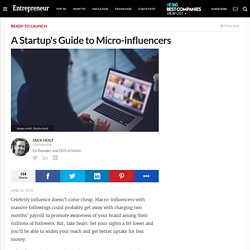 Macro-influencers with massive followings could probably get away with charging two months’ payroll to promote awareness of your brand among their millions of followers. But, take heart: Set your sights a bit lower and you'll be able to widen your reach and get better uptake for less money. Related: How 'Micro Marketing' Can Create Macro Results for Your Brand. The Biggest Problem With Micro-Influencers (and How to Solve It) By now, you’ve probably heard the phrase, “the rise of the micro-influencers.” 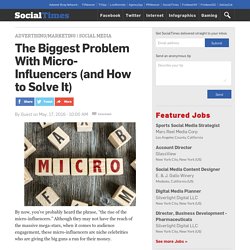 Although they may not have the reach of the massive mega-stars, when it comes to audience engagement, these micro-influencers are niche celebrities who are giving the big guns a run for their money. As reach alone is becoming a far less important metric, the proposition of these engagement-driving micro-influencers is looking even better for brands looking to connect with their audiences. 8 Companies That Can Fuel Your Influencer Marketing. Confessions of a social media exec on influencer marketing: 'We threw too much money at them' “Influencer” is the biggest buzzword of the moment. An entire ecosystem has evolved around these social media stars, but there are cracks in the foundation. The relationship between brands, agencies and influencers is starting to get rocky.