Skills for Success in a Disruptive World of Work — Work Futures. In past decade or two, we have seen so many large businesses being disrupted or transformed completely by digital forces. 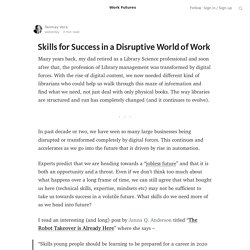 This continues and accelerates as we go into the future that is driven by rise in automation. Experts predict that we are heading towards a “jobless future” and that it is both an opportunity and a threat. Even if we don’t think too much about what happens over a long frame of time, we can still agree that what bought us here (technical skills, expertise, mindsets etc) may not be sufficient to take us towards success in a volatile future. What skills do we need more of as we head into future? I read an interesting (and long) post by Janna Q. “Skills young people should be learning to be prepared for a career in 2020 include: The ability to concentrate, to focus deeply. Truth Inside Of You. Words and Phrases You Should Never Use in a Job Interview - learn English,com... Real English® - Looking for a job? Think about your... Google got it wrong. The open-office trend is destroying the workplace. 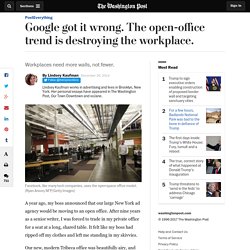 (Ryan Anson/AFP/Getty Images) A year ago, my boss announced that our large New York ad agency would be moving to an open office. After nine years as a senior writer, I was forced to trade in my private office for a seat at a long, shared table. It felt like my boss had ripped off my clothes and left me standing in my skivvies. Our new, modern Tribeca office was beautifully airy, and yet remarkably oppressive. Despite its obvious problems, the open-office model has continued to encroach on workers across the country. These new floor plans are ideal for maximizing a company’s space while minimizing costs.

The New Yorker, in a review of research on this nouveau workplace design, determined that the benefits in building camaraderie simply mask the negative effects on work performance. 18 Things Millennials Actually Want For Christmas. We millennials are a special breed of humans, but our lives are not perfect.

So this Christmas, instead of getting cash or a Playstation 4, here are the things we really want and need. Bad day at the office for some. Examples of Good and Bad CVs. Here is an example of a high quality graduate CV and also of a poor CV for the same person, containing the mistakes typically made of CVs, plus tips on how to put them right. 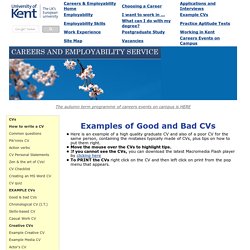 Move the mouse over the CVs to highlight tips. If you cannot see the CVs, you can download the latest Macromedia Flash player by clicking here To PRINT the CVs right click on the CV and then left click on print from the pop menu that appears. Back to CV and Covering Letter Examples Home Page. Activity based working beats presenteeism any day. The Other 21st Century Skills. Many have attempted to identify the skills important for a learner today in this era of the 21st century (I know it is an overused phrase). 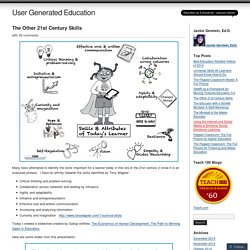 I have an affinity towards the skills identified by Tony Wagner: Critical thinking and problem-solvingCollaboration across networks and leading by influenceAgility and adaptabilityInitiative and entrepreneurialismEffective oral and written communicationAccessing and analyzing informationCuriosity and imagination Today I viewed a slideshow created by Gallup entitled, The Economics of Human Development: The Path to Winning Again in Education. Worst Job Interview Mistakes. It’s been a while since I’ve been on a formal job interview, but I can still remember my most awful one with vivid, cringeworthy clarity. 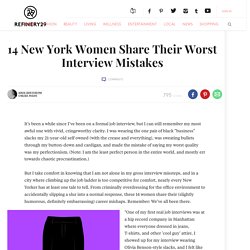 I was wearing the one pair of black "business" slacks my 21-year-old self owned (with the crease and everything), was sweating bullets through my button-down and cardigan, and made the mistake of saying my worst quality was my perfectionism. (Note: I am the least perfect person in the entire world, and mostly err towards chaotic procrastination.) But I take comfort in knowing that I am not alone in my gross interview missteps, and in a city where climbing up the job ladder is too competitive for comfort, nearly every New Yorker has at least one tale to tell.

From criminally overdressing for the office environment to accidentally slipping a slur into a normal response, these 14 women share their (slightly humorous, definitely embarrassing) career mishaps. Uk.businessinsider. Why Social Media Is The New Resume. Get a Haircut : Music Video. Why Google doesn’t care about hiring top college graduates. On Dec. 4, Italians went to the polls to decide on a reform referendum that would redefine the power of local governments and reduce the power of the senate. 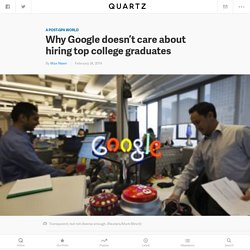 With a high turnout, my countryman rejected the reform. In the press, the voters’ decision was described as an Italian Brexit, and a triumph of populism. Beppe Grillo and his Five Star Movement, arguably Europe’s largest populist party, celebrated with Matteo Salvini, leader of the xenophobic Northern League; Marine Le Pen sent congratulations via Twitter, claiming that Italians’ had disavowed not just their prime minister, but the entire European Union. Shon Burton Of HiringSolved On Social Media.