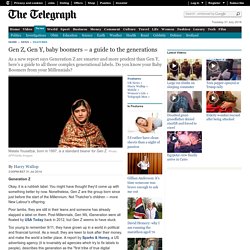 Generation Y Also known as Millennials, born between about 1980 and 2000. Born between the advent of the Walkman and the founding of Google, the members of Gen Y are unsurprisingly shaped by technology. Some have made fortunes from it. A few, like this man, have already become billionaires. Mark Zuckerberg, founder of Facebook, wearing a jacket. The phrase Generation Y was first used in a 1993 Ad Age article, while Millennials was coined by sociologists Neil Howe and William Strauss. Maybe it is not surprising -- this is a group who were brought up and pampered by their Gen X parents, who soothed them to sleep with Baby Einstein tapes. Generation X The man credited for christening this generation with such a deeply dull label is Robert Capa, the war photographer.

What we now mean by Generation X is this bunch of six impossibly well-groomed young adults: But this is a large generation. Lads Larger, larger, larger. The Generation Guide - Millennials, Gen X, Y, Z and Baby Boomers. Millennials and Generation Z are starting to monopolize the business content over the internet, conference presentations, research papers and eventually sales and marketing strategies. 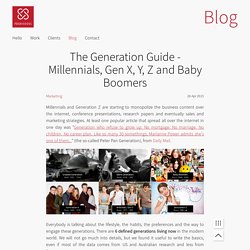 At least one popular article that spread all over the internet in one day was "Generation who refuse to grow up: No mortgage. No marriage. No children. No career plan. Like so many 30-somethings, Marianne Power admits she's one of them... " Everybody is talking about the lifestyle, the habits, the preferences and the way to engage these generations. The Greatest Generation: Born between 1901 - 1924, they are those who experienced the Great Depression and World War II in their adulthood, all leading to strong models of teamwork to overcome and progress. Pizza slices of my life – mikeharrison. This post was prompted by an exchange with Aleksandra Grabowska on Facebook and is an extension of what I wrote following an English For Action workshop at the Rewrite Creative ESOL day conference last year. 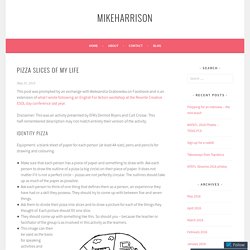 Disclaimer: This was an activity presented by EFA’s Dermot Bryers and Cait Crosse. This half-remembered description may not match entirely their version of the activity. Identity pizza Equipment: a blank sheet of paper for each person (at least A4 size); pens and pencils for drawing and colouring. Make sure that each person has a piece of paper and something to draw with. This image can then be used as the basis for speaking activities and discussion. What is that picture? Obviously other language may come up and can be dealt with as it emerges.This could then lead on to other activities. What’s good about this is that it is an open-ended activity. I think it’s a great activity, and if I were teaching a class at the moment I would do it tomorrow.

EA1 Grammar. Common English Idioms to Describe People - learn English,vocabulary,communica... This Font Simulates What It's Like To Have Dyslexia. In the world of advertising, most campaign posters are designed to be read easily by anyone from a distance and at close range. 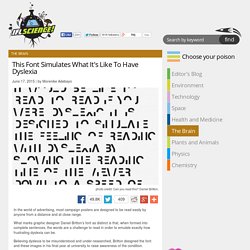 What marks graphic designer Daniel Britton’s font as distinct is that, when formed into complete sentences, the words are a challenge to read in order to emulate exactly how frustrating dyslexia can be. Believing dyslexia to be misunderstood and under-researched, Britton designed the font and these images in his final year at university to raise awareness of the condition. Britton broke down each letter into its component parts and removed sections to make the letter harder to recognize immediately.

Daniel Britton. “The rhetoric about people with dyslexia is that they’re stupid, they’re lazy, they’re not trying,” Britton told MailOnline. As someone with dyslexia, Britton felt that campaigns that used such techniques didn't do the condition justice. “People’s brains can overcome that and decode it. The alphabet as visualized by Britton. Examples of a Healthy Child's Diet. Getting the most out of their meals ... 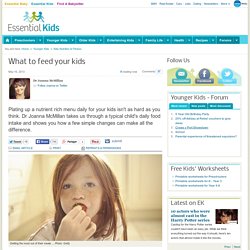 Photo: Getty What do you think of the following sample day’s intake for a six-year-old boy? Breakfast: Slice of white toast with butter & VegemiteMorning tea: An apple and packet of rice based snacksLunch: Ham sandwich (2 slices white bread, butter & slice of ham) and a carton of fruit yoghurtAfternoon tea: Slice of banana breadDinner: Cup of pasta in tomato-based sauce with a tbs grated parmesan cheese. The World's 10 Most Unusual McDonald's - part 1 of 5! Late 1960s McDonalds Commercials Part 1. Rebel Without a Cause - (Movie Clip) I Go With The Kids. A glimpse of teenage life in ancient Rome - Ray Laurence.