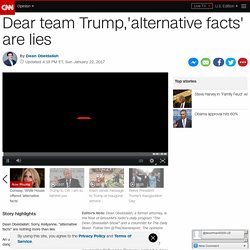 Sorry, Kellyanne, I'm not buying it. "Alternative facts," as NBC's Chuck Todd so accurately put it in response to you on the air, "are not facts, they're falsehoods! " This issue started back on Saturday, when the notoriously thin-skinned Trump visited the CIA and, while standing in front of the wall that pays tribute to CIA agents who sacrificed their lives for our nation, bragged about the size of the crowd that had attended his inauguration. Trump, after first trashing the media, told the audience of CIA employees that, "it looked like a million, million and a half people" were standing in the crowd cheering for him. The only problem with Trump's statement at the CIA is these pesky things called facts. The Senate just confirmed Donald Trump's... - NowThis Politics. Donald J. Trump's speech sounded eerily... - NowThis Politics.

17 Of The Best Tweets From President Donald Trump's Inauguration.