Giesemann’s new Verve LED fixture will be released next week. The Giesemann Verve LED is a brand new light fixture from the venerable German light designer. 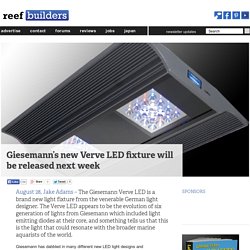 The Verve LED appears to be the evolution of six generation of lights from Giesemann which included light emitting diodes at their core, and something tells us that this is the light that could resonate with the broader marine aquarists of the world. Giesemann has dabbled in many different new LED light designs and form factors over the years, including the Quazar, the Teszla, the Pulzar, the Aurora, the Futura and the large commercial Galaxxy. Giesemann’s Verve LED borrows the outline of the Quazar and stretches it out into a fully fledged fixture with all of the modern features you’d expect to see in a top of the line, controllable LED fixture.

The Giesemann Verve LED has two clusters of 28 LEDs, for 56 total, with six independent channels of color control. How to thoroughly quarantine your Corals. With just about every endeavor success breeds new challenges. 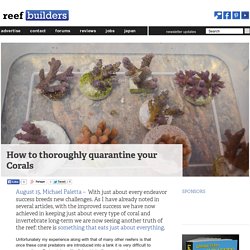 As I have already noted in several articles, with the improved success we have now achieved in keeping just about every type of coral and invertebrate long-term we are now seeing another truth of the reef: there is something that eats just about everything. Unfortunately my experience along with that of many other reefers is that once these coral predators are introduced into a tank it is very difficult to remove them. Fortunately, unlike fish, which often require a long quarantine period in order for any parasites present to be removed, corals can be cleaned in a much more expeditious manner. And while I actually have a quarantine tank for all of my new fish and corals, I realize that most of us, for whatever reason do not. 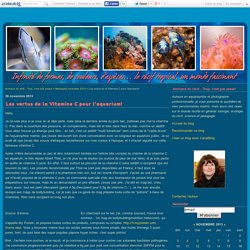 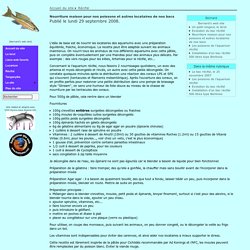 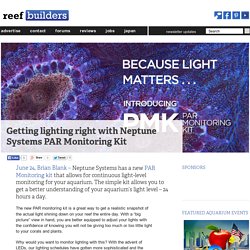 The simple kit allows you to get a better understanding of your aquarium’s light level – 24 hours a day. The new PAR monitoring kit is a great way to get a realistic snapshot of the actual light shining down on your reef the entire day. With a “big picture” view in hand, you are better equipped to adjust your lights with the confidence of knowing you will not be giving too much or too little light to your corals and plants. Why would you want to monitor lighting with this? With the advent of LEDs, our lighting schedules have gotten more sophisticated and the color and intensity variables mean it’s easy to over expose corals to excessive light that is not visible to the human eye that can lead to bleaching and burning of corals.

If you control your lighting with the Apex, there is an extra bonus. The Official WWC Eye Candy Thread!!!! You Don't Wanna Miss This!!!! FUEGO! FUEGO! Exquisite firefish, Nemateleotris exquisita – a bigger yellow version of the purple firefish. The exquisite firefish, Nemateleotris exquisita, joins the small but illustrious group of reef fish which are endowed with equally flattering latin names. 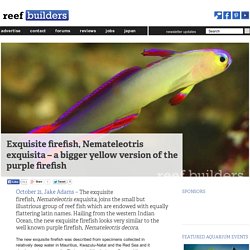 Unknown Mauritius Valenciennea sleeper goby spotted at Greenwich Aquaria. Sleeper gobies are large showy sand-sifting gobies of the genus Valenciennea, of which there are many popular species in aquariums. 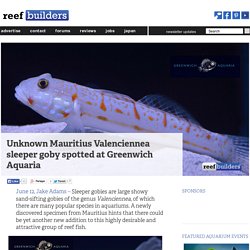 A newly discovered specimen from Mauritius hints that there could be yet another new addition to this highly desirable and attractive group of reef fish. The new Mauritius sleeper goby was brought to our attention by Jason Edward of Greenwich Aquaria. Lately Mr. Edward has enjoyed the discovery of new fish as much as he’s enjoyed the aquarium hobby, with the co-authorship of the recently described Pseudojuloides zeus, and the Pseudojuloides edwardi being named in his honor. Unlike some of the new species of reef fish which show only the minutest differences in colors, patterns, habitat or behavior, the new Mauritius Valenciennea sleeper goby shows a clear difference in color pattern, and similarities with two currently known species. Valenciennea decora from the West Pacific ocean. The Water Change Conundrum. We all have a friend in the hobby or know someone who constantly brags about how he or she has never done a water change and their tank is perfect. 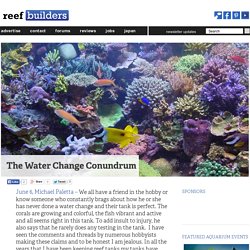 The corals are growing and colorful, the fish vibrant and active and all seems right in this tank. To add insult to injury, he also says that he rarely does any testing in the tank. I have seen the comments and threads by numerous hobbyists making these claims and to be honest I am jealous. S.E.A’s coral reef display is a veritable kaleidoscope of beauty. Oh S.E.A. 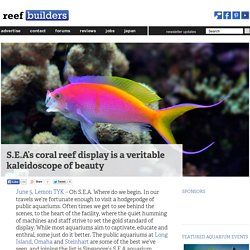 Where do we begin. In our travels we’re fortunate enough to visit a hodgepodge of public aquariums. Often times we get to see behind the scenes, to the heart of the facility, where the quiet humming of machines and staff strive to set the gold standard of display. While most aquariums aim to captivate, educate and enthral, some just do it better. The public aquariums at Long Island, Omaha and Steinhart are some of the best we’ve seen, and joining the list is Singapore’s S.E.A aquarium.

Pseudanthias pictilis. Bali babies on display at Aquarama 2015. Bali Aquarich, the Asian sensation of the aquaculture scene, has been collecting accolades and trail blazing this niche in the last few years. 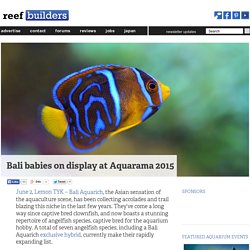 They’ve come a long way since captive bred clownfish, and now boasts a stunning repertoire of angelfish species, captive bred for the aquarium hobby. Papua New Guinean endemics on display by Paradise Aquariums at Aquarama 2015. Aquarama is a fish and accessories exhibition held biennially in Singapore, where exhibitors, exporters, industry authorities and hobbyists gather for a glimpse of the aquarium happenings in South-East Asia. Although Aquarama is mostly geared towards freshwater fish and their corresponding ribbon ponies, it offers a healthy dosage of marine related paraphernalia, such as the market debut of new fangled gadgets and equipment. More importantly, it’s also an excuse for the various industry personalities to gather and discuss on the latest happenings and gossip (kidding).

Wall. Le bac des Maniacodesrécifs (méthode Reefcorner) - Page 17. Guide de l'éducateur - L'exploration de l'espace. Hands-on with the Biotek Marine USB PAR Sensor. BioTek Marine really got a lot of attention when they announced their unique BTM3000 PAR meter. The BTM 3000 is actually a bare PAR sensor with a USB connection to be ‘powered’ by any regular old computer, PC or Mac, and we couldn’t be any more impressed with the execution on the hardware. Users of Apogee Instruments PAR meter will be immediately familiar with the look and feel of the BTM 3000 which is made by Apogee exclusively for BioTek Marine. There are some custom electronics in the sensor side of the BTM 3000 to allow it to be USB powered, and the 15 foot long USB cord really helps to move the sensor around while it is tethered to a stationary machine, and it will be able to reach much deeper in tanks than the standard Apogee PAR meter.

E-Fins, makers of the Algae Mower Vac has designed the Water Refill Genie to be a complete ATO system for any aquarium setup whether it is reservoir based or direct RO filter connection system. The Water Refill Genie has fail safe features against low reservoirs, pump failure, tank leaks and even main pump failure. It also comes with a brand new water level sensor with no moving parts that is durable, accurate to within 0.1 inch (2.5mm) and it is not affected by environmental conditions like waves, bubbles, algae, snails, lighting, electric field from other equipment etc. We are really curious about this tricky new water level sensor as this is one of the areas of ATO monitoring that can always benefit from a more robust design. Ocean Swipe 360 — A Robot that can clean all four sides of an aquarium. Keeping reef tanks is a big job that takes a large investment in time. One of the bigger tasks is cleaning the aquarium glass especially removing it from any built up algae.

A new product called Ocean Swipe 360 seeks to change our hassle of cleaning aquariums with a novel way to clean the inside of aquarium glass. The product uses black colored tracks on the top and bottom of the reef tank so the robot type system can clean away (all four sides) of the aquarium. What’s more is the unit will sense obstacles that might get in the way of the cleaning device as the video below shows. Ocean Swipe 360 has been in development for over two years and just last year a patent was filed on the technology and technique the company is now using. Coralific Delite. Suivi d'un aquarium recifal DSB depuis sa création jean paul 94300 aquarium / Aquariophilie. Vends détritivores escargots cérithium (cérithidé) (petite annonce) Aquarium récifal. Btlstf 2.0 * - Page 2. Température et Densité Aquarium récifal. Reef Hobbyist Magazine.