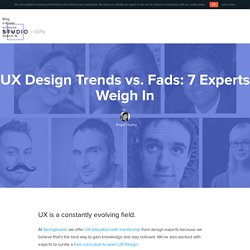 At Springboard, we offer UX education with mentorship from design experts because we believe that’s the best way to gain knowledge and stay relevant. We’ve also worked with experts to curate a free curriculum to learn UX Design. In line with that philosophy, we worked with UXPin to ask some industry experts what they thought were the latest design trends and fads of 2016. Here are their insights. 1. Eva runs her own company (Red Pill UX) based in Boston, is a regular at events of the UXPA Boston, of which she is the former President. 2016 Design Trends That Matter Trend #1: Microinteractions. Social Searcher - Free Social Media Search Engine. Marche Ou Crève - Episode 22 - Le marketing de l'intention. News des stars & live. News, tendances & youth culture. World of melty : l'hymne à la jeunesse. Melty. Un article de Wikipédia, l'encyclopédie libre. 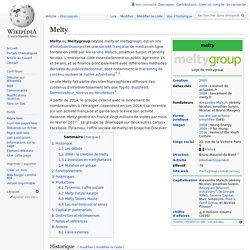 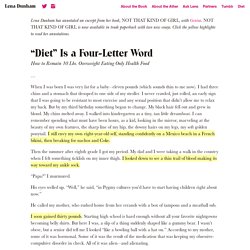 NOT THAT KIND OF GIRL is now available in trade paperback with two new essays. Click the yellow highlights to read her annotations. How to Remain 10 Lbs. Overweight Eating Only Health Food I was very fat for a baby—eleven pounds (which sounds thin to me now). Then the summer after eighth grade I got my period. “Papa?” His eyes welled up. He called my mother, who rushed home from her errands with a box of tampons and . . This was the same year that I became a vegan. I maintained the position for nearly ten years, occasionally lapsing into vegetarianism and beating myself up about it.

While my veganism began as a deeply felt moral position, it soon morphed into a not-very-effective eating disorder. NO FILTER: An Afternoon With Kim Kardashian - PAPERMAG. Kim wears Mikimoto necklaces and earrings, customized dress and vintage gloves throughout If you know nothing else about Kim Kardashian, you know that she is very, very famous. 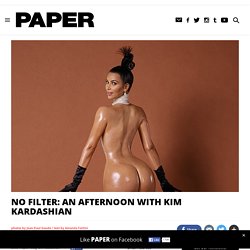 Some would say that's all you need to know. At press time, she has 25 million Twitter followers, about a million less than Oprah Winfrey and nearly 5 million more than CNN Breaking News. Her Instagram account, where she is a prolific purveyor of selfies, is the site's third most popular. You can't walk through a supermarket without glimpsing her on a multitude of tabloids whose headlines holler about her relationships, her parenting style and the vicissitudes of her ample curves. Wednesday’s GOP debate transcript, annotated. The second debate for top Republican presidential candidates included bashing Donald Trump, a fiery Carly Fiorina and an admission from Jeb Bush that he says his mom won't like. 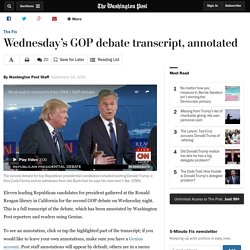 (CNN) Eleven leading Republican candidates for president gathered at the in California for the second GOP debate on Wednesday night. This is a full transcript of the debate, which has been annotated by Washington Post reporters and readers using Genius. To see an annotation, click or tap the highlighted part of the transcript; if you would like to leave your own annotations, make sure you have a Genius account.

Post staff annotations will appear by default; others are in a menu that you can see in the upper right when you click or tap on an annotation. TAPPER: I'm Jake Tapper. TAPPER: The eleven leading Republican candidates for president are at their podiums. TAPPER: To viewers who are just joining us, welcome to the Air Force One Pavilion of the Ronald Reagan Presidential Library. The CNN Democratic debate transcript, annotated. Hillary Clinton and Bernie Sanders and the other candidates took on gun control, Benghazi and other big issues at the first Democratic presidential debate of the 2016 race. 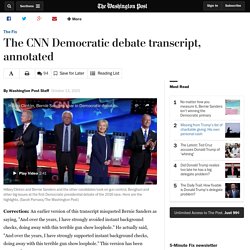 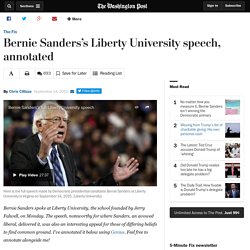 (Liberty University) Bernie Sanders spoke at Liberty University, the school founded by , on Monday. The speech, noteworthy for where Sanders, an avowed liberal, delivered it, was also an interesting appeal for those of differing beliefs to find common ground. I've annotated it below using Genius. Feel free to annotate alongside me! Thank you, President and . And let me start off by acknowledging what I think all of you already know. And the right of a woman to control her own body. I believe gay rights and gay marriage. Those are my views, and it is no secret. Too often in our country -- and I think both sides bear responsibility for us -- there is too much shouting at each other. Reddit: the front page of the internet. Nuzzel: News From Friends And Influencers. Genius. Genius is an online knowledge project that breaks down information with line-by-line annotations, added and edited by anyone in the world. 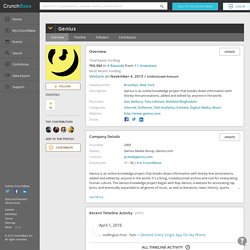