Web Tempest. Velocity: The chosen one For a while there were several competing test runners but Velocity obviously stood out to the Meteor team: they have dubbed it the official test runner. 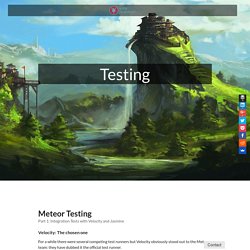 Do note that it's just the test runner. You don't write your tests in special Velocity code or anything - you write them in other established test frameworks like Jasmine or Mocha. Velocity just handles setting up the test environment, running the tests and then displaying the results. You can read more about Velocity here. Mocha vs Jasmine I've used both Jasmine and Mocha in previous projects (both with Backbone JS) - there wasn't much difference. For this tutorial I'll use Jasmine as it seems the more popular of the two. Setup. Node.js - Does Meteor need either Gulp or Grunt? Lodash. Meteor. Like make, gcc, and ld in the Unix world, or the command-line Visual Studio tools in the Windows world, Meteor Isobuild is a complete toolchain for building an app from its source code into a set of runnable programs. 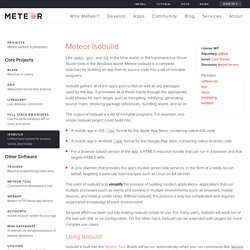 Isobuild gathers all of the app's source files as well as any packages used by the app. It processes all of these inputs through the appropriate build phases for each target, such as transpiling, minifying, generating source maps, resolving package references, bundling assets, and so on. The output of Isobuild is a set of runnable programs. For example, one simple Isobuild project could build into: The point of Isobuild is to simplify the process of building modern applications: applications that run multiple processes (such as clients and servers) in multiple environments (such as browsers, mobile devices, and node.js under Unix). So great effort has been put into making Isobuild simple to use. Api authentication. TelescopeJS/Telescope. Meteor JS on Clever Cloud. Lately, a lot of developpers asked us about Meteorjs support on Clever Cloud. 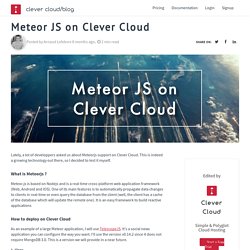 This is indeed a growing technology out there, so I decided to test it myself. What is Meteorjs ? Meteor.js is based on Nodejs and is a real-time cross-platform web application framework (Web, Android and iOS). One of its main features is to automatically propagate data changes to clients in real-time or even query the database from the client (well, the client has a cache of the database which will update the remote one). Meteor JS on Clever Cloud. Introduction - Découvrir Meteor. Au programme de ce chapitre : 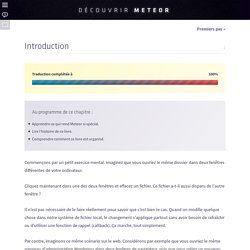 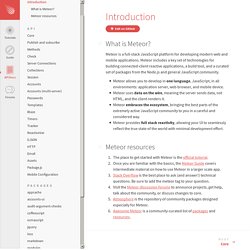 Meteor is a full-stack JavaScript platform for developing modern web and mobile applications. Meteor includes a key set of technologies for building connected-client reactive applications, a build tool, and a curated set of packages from the Node.js and general JavaScript community. Meteor allows you to develop in one language, JavaScript, in all environments: application server, web browser, and mobile device.Meteor uses data on the wire, meaning the server sends data, not HTML, and the client renders it.Meteor embraces the ecosystem, bringing the best parts of the extremely active JavaScript community to you in a careful and considered way.Meteor provides full stack reactivity, allowing your UI to seamlessly reflect the true state of the world with minimal development effort. 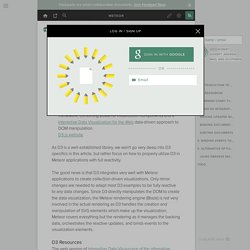 D3 helps you bring data to life using HTML, SVG and CSS. D3’s emphasis on web standards gives you the full capabilities of modern browsers without tying yourself to a proprietary framework, combining powerful visualization components and a Interactive Data Visualization for the Web data-driven approach to DOM manipulation. As D3 is a well established library, we won't go very deep into D3 specifics in this article, but rather focus on how to properly utilize D3 in Meteor applications with full reactivity. The good news is that D3 integrates very well with Meteor applications to create collection driven visualizations.

D3 Resources Since D3 can be used to produce wide array of data visualizations, a good way to start on building your own is to look over the many high quality examples and find one that is close to what you are looking for. The trusted source for JavaScript packages, Meteor resources and tools. Popular Searches: bootstrap accounts bootstrap3 autoform material reactive polymer roles semantic useraccounts Overview Report Bugs GitHub Readme meteor-ionic Build Ionic apps in Meteor! 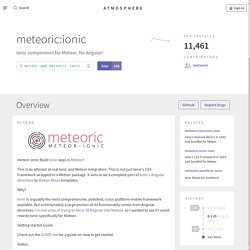 Build a WhatsApp clone with Meteor and Ionic - Meteor Platform version. For the newer, Angular 2 version post, click here… Now that Angular is a first class citizen in Meteor, you can use all of its vast libraries, giving you full access to the Angular ecosystem. 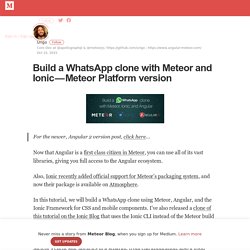 Also, Ionic recently added official support for Meteor’s packaging system, and now their package is available on Atmosphere. In this tutorial, we will build a WhatsApp clone using Meteor, Angular, and the Ionic Framework for CSS and mobile components. I’ve also released a clone of this tutorial on the Ionic Blog that uses the Ionic CLI instead of the Meteor build system. It’s a good resource for people who wants to use Meteor for their backend and Meteor’s client side libraries in a separate front end application, also a good migration strategy. If you are using Blaze, you can still use Ionic’s CSS libraries or the Meteoric package. Meteor. Get started. Current version: 1.2.1 Meteor supports OS X, Windows, and Linux, and is simple to install. 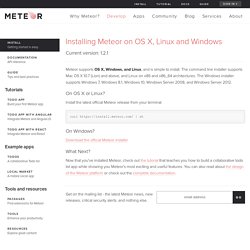 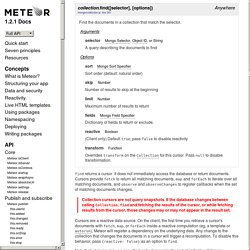 What once took weeks, even with the best tools, now takes hours with Meteor. The web was originally designed to work in the same way that mainframes worked in the 70s. The application server rendered a screen and sent it over the network to a dumb terminal. Whenever the user did anything, that server rerendered a whole new screen. This model served the Web well for over a decade.

Pricing. What forms of payment do you accept? We accept Visa, Mastercard, American Express, Discover, and PayPal. For additional payment options, including wire transfer, purchase orders, and ACH, please contact us. Note that when you add a card, we may send a temporary pre-authorization request to the issuing bank. This pre-authorization charge is immediately released by DigitalOcean but may take a few days to clear from your card depending on the bank. When will my card be charged? DigitalOcean billing cycles are monthly. Am I charged when I enter my credit card?

No. Pre-authorization charge: When you add a card, we may send a preauthorization request to the issuing bank. Will taxes be included in my monthly invoice? We’re required by law to apply taxes in some countries. Why am I billed for powered off Droplets? When you power off your Droplet, you are still billed for it. Déploiement - Découvrir Meteor. Au programme de ce chapitre : 4 Cordova Examples with ReactJS. React in Meteor. Using Meteor and React together is awesome.

Meteor gives you a fast, easy to use solution for data management across client and server, and React gives you a way to structure your app's UI from reusable components. We are still making improvements and investigating the best ways to use Meteor and React together, but these packages are officially supported as of Meteor 1.2.

Try them out and let us know what you think on GitHub! Application mobile Cordova avec Meteor. Announcing Meteor 1.2 – ES2015, Angular, React, and More. Today we're delighted to announce Meteor 1.2, our latest release of the Meteor JavaScript application platform. It's our largest and most ambitious release to date, with big additions to nearly every part of the stack. Visit the Meteor install page to get started with Meteor 1.2, or run meteor update to upgrade your existing system. There's a lot to talk about, so let's get right into it. Meet ECMAScript 2015. Ben Newman: Meteor and ES2015. Exploring ES6. Meteor: How do you exactly install phantomJS?

Spiderable package. Readme spiderable is part of Webapp. It's one possible way to allow web search engines to index a Meteor application. It uses the AJAX Crawling specification published by Google to serve HTML to compatible spiders (Google, Bing, Yandex, and more). When a spider requests an HTML snapshot of a page the Meteor server runs the client half of the application inside phantomjs, a headless browser, and returns the full HTML generated by the client code. In order to have links between multiple pages on a site visible to spiders, apps must use real links (eg <a href="/about">) rather than simply re-rendering portions of the page when an element is clicked.

Specialization. Meteor_Case_Study_Hansoft_091415.pdf. Implementing an Instant Search Solution with Meteor. I think that I don’t need to say much about instant searching. I am sure not sure who came up with the idea first, but Google made it so popular. So, today I will show you how to build such an instant search solution with Meteor. To demo it, I’ll build a super fast search app to search Meteor packages. You can try it live from here or watch the following video: All wrong-doing arises because of mind. If mind is transformed can wrong-doing remain?

Quora - The best answer to any question. Server-side autocomplete pub/sub example. Meteor.js vs. the MEAN stack - Dan Dascalescu's Wiki. I started writing this article as an answer on Quora, seeing how there wasn't really any good comparison between Meteor.js and the MEAN stack (MongoDB, Express, Angular, Node.js).