At least 44 school shootings since Newtown — new analysis. Twenty-six candles were lit on Dec. 14, 2013 by President Obama and First Lady Michelle Obama, to honor the 26 students and teachers killed at Sandy Hook Elementary School in Newtown, Connecticut, the year before. (AFP PHOTO / Saul LOEBSAUL LOEB/AFP/Getty Images) There have been at least 44 school shootings on K-12 or college campuses in 24 states — an average of more than three a month — since the deadly 2012 attack at Sandy Hook Elementary School in Newtown, Conn., according to a new analysis.

Twenty-eight people have died and 37 have been injured. Twenty children and six adults working at Sandy Hook were killed in the December 2012 assault in Newtown, leading to renewed calls around the nation for Congress to take action to prevent more gun violence. Legislators did nothing. “Parents in communities across the country live in fear. Mayors Against Illegal Guns was co-founded in 2005 by then New York City Mayor Michael Bloomberg and then Boston Mayor Thomas Menino. The analysis says: Timeline of Worldwide School Shootings. History. In early 2000, PACER noted that calls from parents of children with disabilities about bullying situations were increasing. 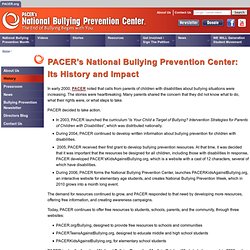 The stories were heartbreaking. Many parents shared the concern that they did not know what to do, what their rights were, or what steps to take. PACER decided to take action. In 2003, PACER launched the curriculum “Is Your Child a Target of Bullying? Intervention Strategies for Parents of Children with Disabilities”, which was distributed nationally. The demand for resources continued to grow, and PACER responded to that need by developing more resources, offering free information, and creating awareness campaigns. Violence Prevention Works. Dr. 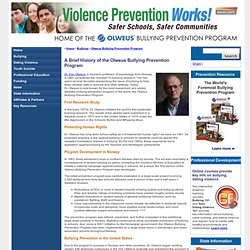 Dan Olweus, a research professor of psychology from Norway, is often considered the "pioneer" in bullying research. " He has spent several decades researching the issue of bullying to help keep children safe in schools and other settings. Today, Dr. Olweus is best known for the most researched and widely adopted bullying prevention program in the world, the Olweus Bullying Prevention Program. First Research Study. History of Bullying - Dealing with Bullies. Bullying isn't a new problem, but people are becoming more and more aware of its negative impact on kids. 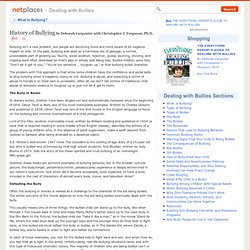 In the past, bullying was seen as a harmless rite of passage, a normal, unavoidable part of growing up. Taunts, social isolation, rejection, gossip, pushing, shoving, and tripping were often dismissed as child's play or simply kids being kids. Bullied children were told, “Don't let it get to you,” “You're too sensitive … toughen up,” or that bullying builds character. The problem with this approach is that while some children have the confidence and social skills to stop bullying when it happens, many do not. Bullying is abuse, and expecting a victim of abuse to handle it on their own is unrealistic. The Bully in Books In literary works, children have been singled out and systematically harassed since the beginning of time.

S.E. Defeating the Bully Often the bullying in movies is viewed as a challenge to the character of the kid being bullied. The First Bully Related Research Study. The Origins of Bullying. Late on a Saturday night in September, a 14-year old boy named Jamey Rodemeyer, who had been the target of bullying from fellow students at Williamsville North High School in Buffalo New York, took his life. 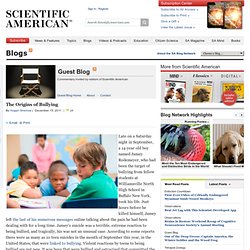 Just hours before he killed himself, Jamey left the last of his numerous messages online talking about the pain he had been dealing with for a long time. Jamey’s suicide was a terrible, extreme reaction to being bullied, and tragically, his was not an unusual case. According to some reports there were as many as 10 teen suicides in the month of September this year, in the United States, that were linked to bullying. Violent reactions by teens to being bullied are not new. It was boys that were bullied and ostracized that committed the high school shootings that plagued the US in the 1990’s.

The response to this crisis in the United States has been efforts at the local, regional and Federal (stopbullying.gov) levels to combat bullying and its impacts. References: The Origins of Bullying. History of Bullying. Bullying has been a critical issue in schools for decades. 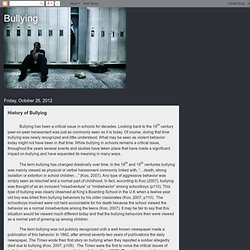 Looking back to the 18th century peer-on-peer harassment was just as commonly seen as it is today. Of course, during that time bullying was newly recognized and little understood. What may be seen as violent behavior today might not have been in that time. While bullying in schools remains a critical issue, throughout the years several events and studies have taken place that have made a significant impact on bullying and have expanded its meaning in many ways. The term bullying has changed drastically over time.

The term bullying was not publicly recognized until a well known newspaper made a publication of this behavior. List of attacks related to secondary schools. Secondary school incidents[edit] 1850s[edit] 1860s[edit] 1870s[edit] 1880s[edit] 1890s[edit] 1900s[edit] 1910s[edit] 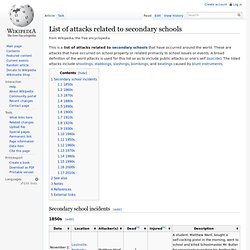