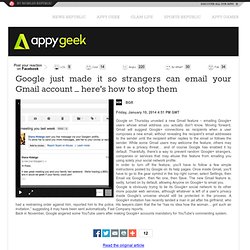 Moving forward, Gmail will suggest Google+ connections as recipients when a user composes a new email, without revealing the recipient's email addresses to the sender until the recipient either replies to the email or follows the sender. While some Gmail users may welcome the feature, others may see it as a privacy threat… and of course Google has enabled it by default. In order to turn off the feature, you'll have to follow a few simple instructions posted by Google on its help pages. Google is obviously trying to tie its Google+ social network to its other more popular web services, although whatever is left of a user's privacy inside Google's universe should still be protected in the process.

Best smartphones for $100 or less - CNET Mobile. A hundred greenbacks is a respectable chunk of change, but when you consider what a piece of machinery a smartphone can be, $100 on contract (before taxes and fees) is a darn good deal. 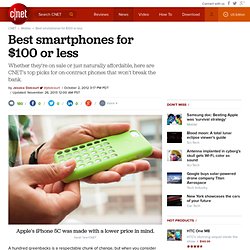 Since the smartphone operating system remains the same across handsets from the most entry-level to the most premium, what a price hike usually gives you is a step up in hardware features -- like a faster processor, more-premium camera components, and a higher-resolution screen. Sometimes you'll get a break on last season's high-end devices; other times, you'll find excellent phones that are made for this middle cost. LA Times. Grand Prix History. Texting and driving woman ends up in lake - CNET Mobile. People have texted and fallen into water before. 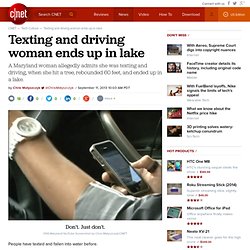 Just last year, a lady was so engrossed in her cell phone as she walked that she fell into Lake Michigan . However, this might be the first time a woman has allegedly admitted to texting and driving, smashing into a tree, and then bouncing 60 feet before ending up in a lake. As WTOP News reports, the unidentified 25-year-old Maryland woman told the sheriffs that texting and driving had caused her to do the latter imperfectly. Her Hyundai ended up submerged in 5 feet of water, but, still with her wits about her, she managed to clamber out of the driver's side door to safety. Though she ended up in the hospital, she was reportedly unhurt. Top 12 misterioznih lokacija uočenih na Google maps. Hack your Android like a pro: Rooting and ROMs explained. For all of Android's flexibility and customization, carriers and phone makers still manage to lock down plenty of restrictions, skins, and preloaded software that you just don't want. 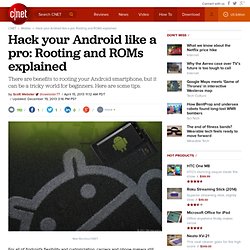 There isn't anything wrong with most out-of-the-box experiences, but more-daring and tech-savvy users who tire of being at the mercy and discretion of carriers and handset makers might be interested in pushing their Android devices to new limits and root them. Around since the early days of the T-Mobile G1 (HTC Dream), rooting can add functionality to a phone and often extend the life of the device.

The T-Mobile G1, for instance, was officially supported through Android 1.6 Donut, but if you rooted the phone, you could load an alternative developer-made version of the OS that offered most of Android 2.2 Froyo's features. Tips and tricks for speeding up your Android device. You may have noticed over the past few months that your once-speedy Android device has slowed down considerably. 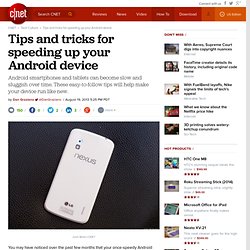 Simple tasks such as switching between apps or returning home are proving more troublesome than before, and you are now experiencing lag in all the wrong places. Things don't have to be this way, however. These simple tips and tricks can help speed up your device and make it perform like new: 1. Uninstall or disable unused apps Your device has a limited amount of internal storage and the less free space it has the slower it will perform. Uninstalling apps can be done by going to Settings, opening the Apps menu, and selecting the app you wish to uninstall. On smartphones and tablets that include expandable storage you can also move apps to the microSD card. 2. 3. Reducing the number of widgets, especially data-intensive ones like Facebook, will help your smartphone or tablet run more smoothly and last longer.

How to use Transit App to find your way around town - CNET Mobile. In a spurt of perfect timing, I discovered Transit App almost immediately upon arrival in Chicago, where I was totally unfamiliar with the city's awesome public transportation system (make that systems, plural). 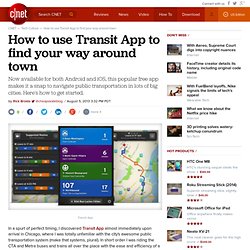 In short order I was riding the CTA and Metra buses and trains all over the place with the ease and efficiency of a Chicago native. I used the app on my iPhone, but Transit App is now available for Android as well. Get 1GB extra Dropbox space just for using Mailbox - CNET Mobile. You remember Mailbox, right? 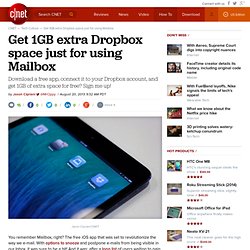 The free iOS app that was set to revolutionize the way we e-mail. Pyramids in Bosnia. Formula 1.