Recreating the Duke of Wellington's victory banquet, 200 years on. 19th century treats (recipes below) (ANDY SEWELL) The Wellington Arch, in the middle of the roundabout, has been refurbished and now contains an exhibition devoted to Waterloo, illustrated by a collection of related objects – the Duke of Wellington’s boots, his handwritten battle dispatches and moving early photographs of ancient Waterloo survivors being a few of them. 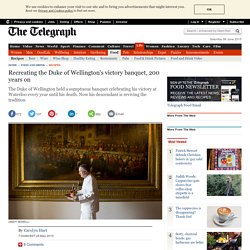 Waterloo 200 » Dresses worn at the Duchess of Richmond’s Ball. The celebration of Waterloo in 1817 - Untold lives blog. To celebrate the second anniversary of the Battle of Waterloo, Strand Bridge was opened by the Prince of Wales (later George IV) and the Duke of Wellington on 18 June 1817. 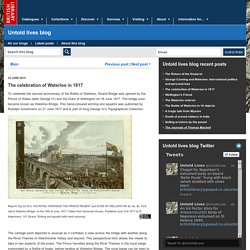 The bridge soon became known as Waterloo Bridge. This hand-coloured etching and aquatint was published by Rudolph Ackermann on 21 June 1817 and is part of King George III’s Topographical Collection. Maps K.Top.22.40.b. HIS ROYAL HIGHNESS THE PRINCE REGENT and DUKE OF WELLINGTON &c. &c. The vantage point depicted is unusual as it conflates a view across the bridge with another along the River Thames to Westminster Abbey and beyond. The print also enables to viewer to link the celebrations to the Battle of Waterloo itself. Another view from King George III’s Topographical Collection shows Ackermann’s shop at 101 Strand, from where this print would have been sold. The dentures made from the teeth of dead soldiers at Waterloo - BBC News. In 1815, dentistry as we know it today was in its infancy - and the mouths of the rich were rotten. 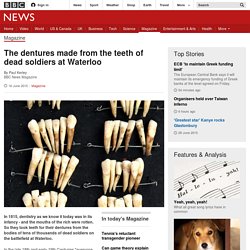 So they took teeth for their dentures from the bodies of tens of thousands of dead soldiers on the battlefield at Waterloo. In the late 18th and early 19th Centuries "everyone was dabbling in dentistry", says Rachel Bairsto, curator of British Dental Association's museum in central London. From ivory turners to jewellers, chemists, wigmakers and even blacksmiths.

Among the wealthy, sugar consumption was on the rise and early attempts at teeth-whitening - with acidic solutions - wore away enamel. Teeth were being pulled. There is evidence from the years before the Battle of Waterloo, says Bairsto, that early dentists did place human teeth in dentures. This advertisement above, from 1792, calls for foreign teeth - which would have been riveted into ivory dentures and placed into unhealthy British mouths. At this stage, the dentures' base plate was ivory, with human teeth attached. 10 Things You Didn’t Know About the Battle of Waterloo - Romance, fiction books and ebooks from Mills & Boon. When I was researching for my book in the Brides of Waterloo trilogy I discovered dozens of facts that surprised me and brought the battle to life. 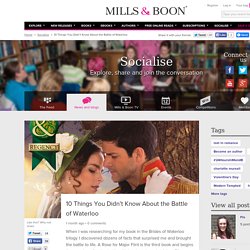 A Rose for Major Flint is the third book and begins the morning after the battle with hardened warrior Adam Flint discovering a traumatised young woman being threatened by looters. He calls her Rose, takes her back to Brussels – and fights desperately not to lose his heart to her. 1. Napoleon’s affairs with the bankers and smugglers. At the end of the 17th and beginning of the 18th century free traders went about their business more or less unimpeded along the shores of the southern counties of England. 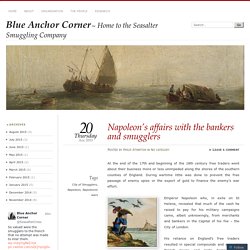 During wartime little was done to prevent the free passage of enemy spies or the export of gold to finance the enemy’s war effort. Emperor Napoleon who, in exile on St Helena, revealed that much of the cash he raised to pay for his military campaigns came, albeit unknowingly, from merchants and bankers in the Capital of his foe – the City of London. His reliance on England’s free traders resulted in special compounds and areas in French towns and ports being made accessible to them and creating exclusive smuggling communities. Between 1810 and 1814, the Napoleonic state officially sanctioned and supported the smugglers, using them as a weapon of war against Britain and to boost the domestic French industry.

“They did great mischief to your Government. “I had every information I wanted from them. References: Like this: 1815 - CandiceHern.com. All links are to Wikipedia entries. 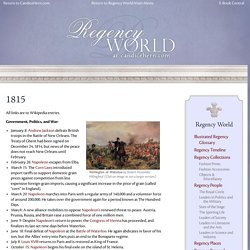