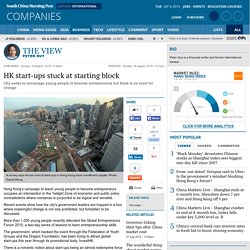 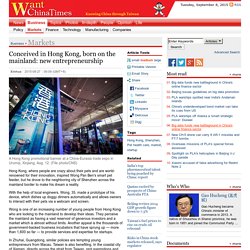 (File photo/CNS) Hong Kong, where people are crazy about their pets and are world-renowned for their innovation, inspired Wong Pan Ben's smart pet feeder, but he drove to the neighboring city of Shenzhen across the mainland border to make his dream a reality. With the help of local engineers, Wong, 35, made a prototype of his device, which dishes up doggy dinners automatically and allows owners to interact with their pets via a webcam and screen. Wong is one of an increasing number of young people from Hong Kong who are looking to the mainland to develop their ideas. They perceive the mainland as having a vast reservoir of generous investors and a market which is almost without limits.

Youngest Chinese keener entrepreneurs: survey - Business. Zhang Yu: Learn Beyond the Professional Skills  This is part of the #CareerAdvice series - featuring successful professionals who share their advice to people who would want to take their career to the next level. 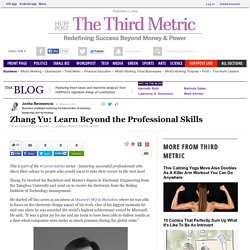 Zhang Yu received his Bachelors and Master's degree in Electronic Engineering from the Tsinghua University and went on to receive his Doctorate from the Beijing Institute of Technology management. From a Shenzhen factory job to world’s richest self-made woman. Innovation pays huge dividends. Inspire 1, an unmanned aerial vehicle model developed by Shenzhen DJI Technology Co. 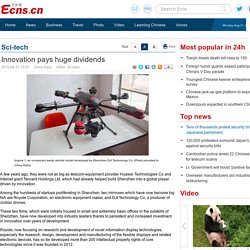 (Photo provided to China Daily) A few years ago, they were not as big as telecom-equipment provider Huawei Technologies Co and Internet giant Tencent Holdings Ltd, which had already helped build Shenzhen into a global player driven by innovation. Entrepreneurship sets high standard for Shenzhen's future[1]- Chinadaily.com.cn. Shenzhen Travel Guide: Map, History, Attractions, Tours. Shenzhen is located in the southern portion of the Guangdong Province, on the eastern shore of the Pearl River Delta. 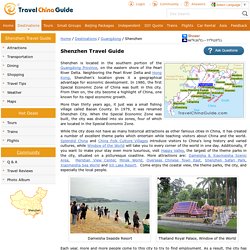 Neighboring the Pearl River Delta and Hong Kong, Shenzhen's location gives it a geographical advantage for economic development. In 1980, the first Special Economic Zone of China was built in this city. From then on, the city become a highlight of China, one known for its rapid economic growth. Shenzhen travel guide. Shenzhen Shenzhen (深圳; Shēnzhèn) is one of the most populous cities in China. 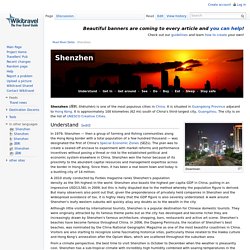 It is situated in Guangdong Province adjacent to Hong Kong. It is approximately 100 kilometres (62 mi) south of China's third-largest city, Guangzhou. The city is on the list of UNESCO Creative Cities. Downtown Understand[edit] In 1979, Shenzhen — then a group of farming and fishing communities along the Hong Kong border with a total population of a few hundred thousand — was designated the first of China's Special Economic Zones (SEZs). A 2010 study conducted by Forbes magazine ranks Shenzhen's population density as the 5th highest in the world. Although little visited by international tourists, Shenzhen is a popular destination for Chinese domestic tourists. Hacking Shenzhen. Hardware startups: Hacking Shenzhen. Market Madness at the Shenzhen Exchange. Last week didn’t start well for Beijing Baofeng Technology Company. 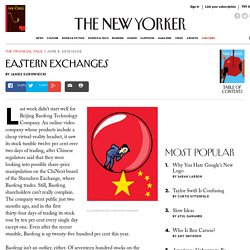 An online-video company whose products include a cheap virtual-reality headset, it saw its stock tumble twelve per cent over two days of trading, after Chinese regulators said that they were looking into possible share-price manipulation on the ChiNext board of the Shenzhen Exchange, where Baofeng trades. Still, Baofeng shareholders can’t really complain. The company went public just two months ago, and in the first thirty-four days of trading its stock rose by ten per cent every single day except one. Even after the recent stumble, Baofeng is up twenty-five hundred per cent this year. Inside Shenzhen: China's Silicon Valley. Huaqiangbei – Electronics, Gadgets, Fashion and More.

Huaqiangbei – Electronics, Gadgets, Fashion and More As one of the top shopping destinations in Shenzhen, Huaqiangbei Commercial Street is renowned for it’s electronics markets, but it also has plenty to offer those looking for mens and womens fashion. 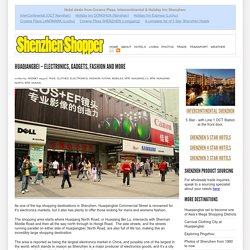 The shopping area starts where Huaqiang North Road, or Huaqiang Bei Lu, intersects with Shennan Middle Road and then all the way north through to Hongli Road. The side streets, and the streets running parallel on either side of Huaqiangbei North Road, are also full of life too, making this an incredibly large shopping destination. The World's First and Most Prolific Hardware Accelerator. Helios Bars - Transform any bike into a smart bike. by Kenny gibbs. Imagine the bike of the future: integrated lighting that responds to your behavior, smartphone connectivity that logs data/statistics for all your rides, built-in navigation, and accurate tracking of bike location (GPS) -- a smarter bike in every possible way. 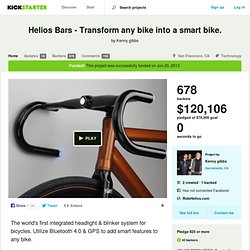 We’re HELIOS and our mission is to revolutionize the biking experience. The smart bike revolution has arrived. Selamta Magazine. Hop on the new high-speed rail line in Guangzhou, China, and within 45 minutes you’ll arrive at the outskirts of Shenzhen. 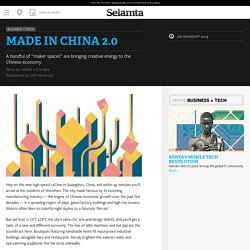 The city, made famous by its booming manufacturing industry — the engine of Chinese economic growth over the past few decades — is a sprawling region of plain, gated factory buildings and high-rise towers. Visitors often liken its colorful night skyline to a futuristic film set. But set foot in OCT LOFT, the city’s ultra-chic arts-and-design district, and you’ll get a taste of a new and different economy. The hiss of latte machines and live jazz are the soundtrack here.

Boutiques featuring handmade items fill repurposed industrial buildings, alongside bars and restaurants. Making in China: Maker Faire Shenzhen highlights the global politics of the 'maker movement' It is Sunday afternoon in the city of Shenzhen, China, and my friend Natasha and I are havering about whether to buy a Lidar robot.

At 2600 yuan – approximately £250 – it’s rather dear but still cheaper than anything we’re likely to find back in the UK; and, as the stallholder tells us, it’s on special offer for the event.