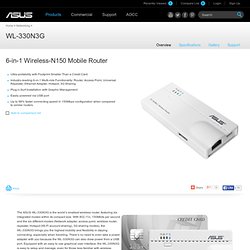 With 802.11n, 150Mbits per second and the six different modes (Network adapter, access point, wireless router, repeater, Hotspot (Wi-Fi account sharing), 3G sharing modes), the WL-330N3G brings you the highest mobility and flexibility in staying connecting, especially when traveling. There’s no need to even take a power adapter with you because the WL-330N3G can also draw power from a USB port. Equipped with an easy to use graphical user interface, the WL-330N3G is easy to setup and manage, even for those less familiar with wireless configurations. Ultra-portability with Footprint Smaller Than a Credit Card Its footprint is smaller than a credit card, making it very easy to carry and literally pocket sized, but not at the expense of functionality. 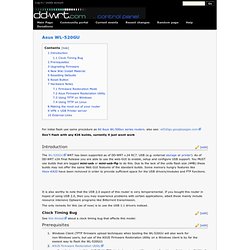 USB (e.g. external storage or printer). It is also worthy to note that the USB 2.0 aspect of this router is very temperamental. The only remedy for this (as of now) is to use the USB 1.1 drivers instead. [edit] Clock Timing Bug See this thread about a clock timing bug that affects this model. [edit] Prerequisites Note: The mini_asus.trx build is supposed to be designed to be uploaded as a firmware upgrade through the ASUS stock firmware's web interface. Asus TFTP Flash. From DD-WRT Wiki For the Asus WL-500 series a few extra steps are available/needed when you do the initial flashing of your Asus WL-500 series router, compared to the general TFTP flash procedure. 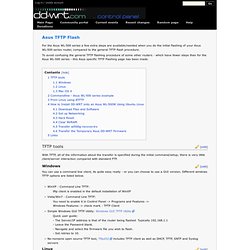 To avoid confusing the general TFTP flashing procedure of some other routers - which have fewer steps than for the Asus WL-500 series - this Asus specific TFTP Flashing page has been made. [edit] TFTP tools With TFTP, all of the information about the transfer is specified during the initial command/setup; there is very little client/server interaction compared with standard FTP. [edit] Windows You can use a command line client, its quite easy really - or you can choose to use a GUI version. 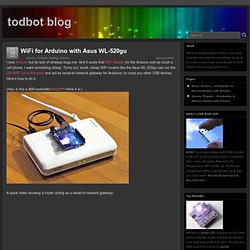 And it sucks that WiFi Shields for the Arduino cost as much a cell phone. I want something cheap. Turns out, small, cheap WiFi routers like the Asus WL-520gu can run the DD-WRT Linux firmware and act as serial-to-network gateway for Arduinos (or most any other USB device). Here’s how to do it. Unleash Your Router. Main Page. Firmware FAQ. From DD-WRT Wiki (Redirected from Index:FAQ) [edit] Is my router supported? 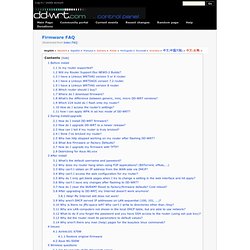