AQA Examine Each of the Four Presumptions of Situation Ethics. Explain how Moral Decisions should be made according to Act and Rule Utilitarianism. January 2011 Question A (30 Marks) The crucial difference between Jeremy Bentham's Act and John Stuart Mill's Rule Utilitarianism is their usage of the hedonic calculus. 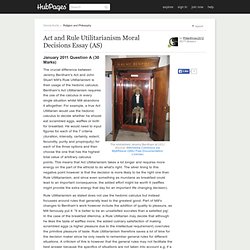 Bentham's Act Utilitarianism requires the use of the calculus in every single situation whilst Mill abandons it altogether. For example, a true Act Utilitarian would use the hedonic calculus to decide whether he should eat scrambled eggs, waffles or both for breakfast. He would need to input figures for each of the 7 criteria (duration, intensity, certainty, extent, fecundity, purity and propinquity) for each of the three options and then choose the one that has the highest total value of arbitrary calculus points. Examine how Bentham's Utilitarianism may be applied to one ethical issue of your choice. Apply Jeremy Bentham's Act Utilitarianism to a complicated real life problem (such as whether or not the UK should legalise the death penalty) and many problems arise that need to be resolved. 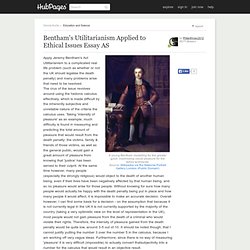 The crux of the issue revolves around using the hedonic calculus effectively, which is made difficult by the inherently subjective and unreliable nature of the criteria the calculus uses. Taking 'intensity of pleasure' as an example, much difficulty is found in measuring and predicting the total amount of pleasure that would result from the death penalty: the victims, family & friends of those victims, as well as the general public, would gain a great amount of pleasure from knowing that 'justice' has been served to their culprit. At the same time however, many people (especially the strongly religious) would object to the death of another human being, even if their lives have been negatively affected by that human being, and so no pleasure would arise for those people. 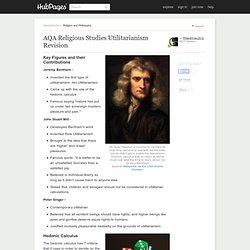 AQA Religious Studies Unit 01 - Religion & Ethics - Abortion and Euthanasia. Arguments For Abortion Women's Rights PrivacyOwnership of bodyEqualitySelf determination Should not be taken away by something that has not experienced or lived yet. 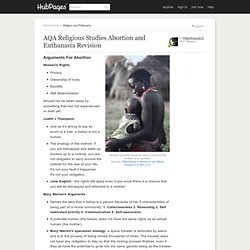 Judith J Thompson Just as it's wrong to say an acorn is a tree, a foetus is not a human.The analogy of the violinist: if you are kidnapped and wake up hooked up to a violinist, you are not obligated to carry around the violinist for the rest of your life - it's not your fault it happened, it's not your obligation.Jane English - the rights still apply even if you know there is a chance that you will be kidnapped and attached to a violinist. AQA Explain religious teachings that support the view that ending the life of a human being can never be justified. AQA Religious Studies - Key Criticisms of the Cosmological Argument Answer. AQA Religious Studies Unit 03 - Philosophy of Religion - Psychology of Religion.

Examine how Situation Ethics may be applied to one ethical issue of your choice. Consider the fact that 80% of the world's population earns less than $10 a day ($3650 a year) whilst 1% of the world's richest owns 90% of wealth and you could argue that the problem of wealth disparity is one of humanity's largest ones. 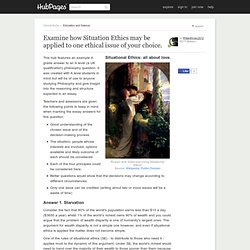 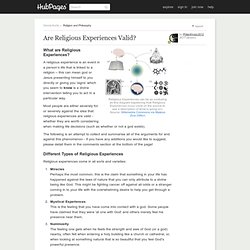 A religious experience is an event in a person’s life that is linked to a religion – this can mean god or Jesus presenting himself to you directly or giving you ‘signs’ which you seem to know is a divine intervention telling you to act In a particular way. Most people are either severely for or severely against the idea that religious experiences are valid - whether they are worth considering when making life decisions (such as whether or not a god exists). The following is an attempt to collect and summarise all of the arguments for and against this phenomenon - if you have any additions you would like to suggest, please detail them in the comments section at the bottom of the page!

Different Types of Religious Experiences Religious experiences come in all sorts and varieties: Miracles Perhaps the most common, this is the claim that something in your life has happened against the laws of nature that you can only attribute to a divine being like God. 1. 2. 3. Different Types of Modern Utilitarianism. Utilitarianism, popularised by Jeremy Bentham, has had many great thinkers take it as the basis of their work. 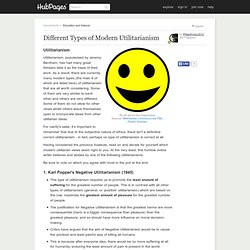 As a result, there are currently many modern types (the main 8 of which are listed here) of utilitarianism that are all worth considering. Some of them are very similar to each other and others are very different. Some of them do not allow for other views whilst others leave themselves open to incorporate ideas from other utilitarian ideas. Famous Philosophers: What Did René Descartes Believe?

Descarte's 4 Rules for the Direction of Thought These are rules he abided by when trying to decide whether something was true or not. 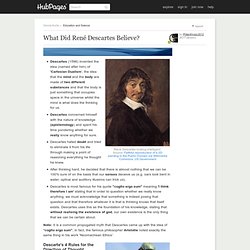 In his own words: "Never to accept anything as true that I did not know to be evidently so... to include in my judgements nothing more than what presented itself so clearly and so distinctly to my mind that I might have no occasion to place it in doubt. " Here he states that when making a more complicated decision, he would only use evidence that was self-evident (you cannot ever question that they are wrong e.g. triangles have three sides).