Identifying the number of clusters: finally a solution. Here I propose a solution that can be automated and does not require visual inspection by a human being. 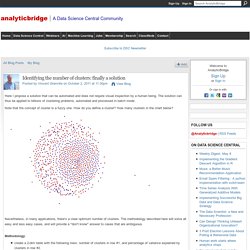 The solution can thus be applied to billions of clustering problems, automated and processed in batch mode. Note that the concept of cluster is a fuzzy one. How do you define a cluster? How many clusters in the chart below? Nevertheless, in many applications, there's a clear optimum number of clusters. Self study - Silhouette coefficients after deleting some data and re-clustering - Cross Validated. K modes clustering : how to choose the number of clusters? 1.11. Feature selection. SelectFromModel is a meta-transformer that can be used along with any estimator that has a coef_ or feature_importances_ attribute after fitting. 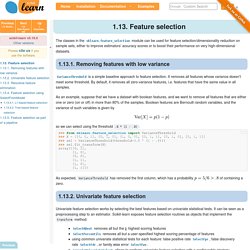 The features are considered unimportant and removed, if the corresponding coef_ or feature_importances_ values are below the provided threshold parameter. Apart from specifying the threshold numerically, there are built-in heuristics for finding a threshold using a string argument. Available heuristics are “mean”, “median” and float multiples of these like “0.1*mean”.

For examples on how it is to be used refer to the sections below. 1.13.4.1. Linear models penalized with the L1 norm have sparse solutions: many of their estimated coefficients are zero. With SVMs and logistic-regression, the parameter C controls the sparsity: the smaller C the fewer features selected. Seven Techniques for Data Dimensionality Reduction. By Rosaria Silipo. 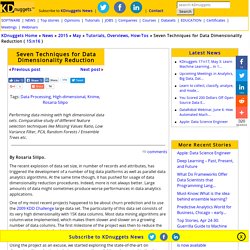 The recent explosion of data set size, in number of records and attributes, has triggered the development of a number of big data platforms as well as parallel data analytics algorithms. At the same time though, it has pushed for usage of data dimensionality reduction procedures. Indeed, more is not always better. Beginners Guide To Learn Dimension Reduction Techniques.

Introduction Brevity is the soul of wit This powerful quote by William Shakespeare applies well to techniques used in data science & analytics as well. 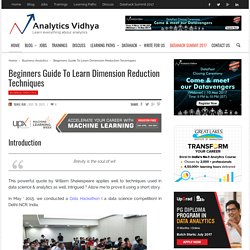 Intrigued ? Allow me to prove it using a short story. Medoid. Medoids are representative objects of a data set or a cluster with a data set whose average dissimilarity to all the objects in the cluster is minimal.[1] Medoids are similar in concept to means or centroids, but medoids are always members of the data set. 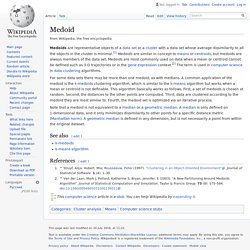 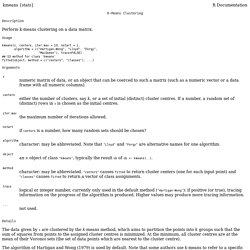 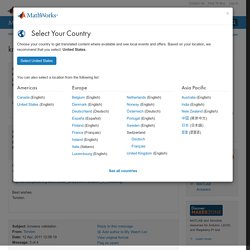 The newsgroups are a worldwide forum that is open to everyone. Newsgroups are used to discuss a huge range of topics, make announcements, and trade files. Cluster analysis - How to calculate BIC for k-means clustering in R. K-means clustering. Sometimes we may want to determine if there are apparent “clusters” in our data (perhaps temporal/geo-spatial clusters, for instance). 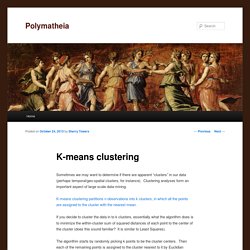 Clustering analyses form an important aspect of large scale data-mining. K-means clustering partitions n observations into k clusters, in which all the points are assigned to the cluster with the nearest mean. If you decide to cluster the data in to k clusters, essentially what the algorithm does is to minimize the within-cluster sum of squared distances of each point to the center of the cluster (does this sound familiar? It is similar to Least Squares). The algorithm starts by randomly picking k points to be the cluster centers. Clustering - K-means incoherent behaviour choosing K with Elbow method, BIC, variance explained and silhouette - Data Science Stack Exchange.

I'm trying to cluster some vectors with 90 features with K-means. 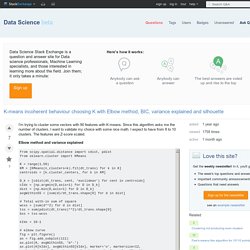 Since this algorithm asks me the number of clusters, I want to validate my choice with some nice math. I expect to have from 8 to 10 clusters. The features are Z-score scaled. Elbow method and variance explained From these two pictures, it seems that the number of clusters never stops :D. Bayesian information criterion This methods comes directly from X-means and uses the BIC to choose the number of clusters. another ref Same problem here... Silhouette. A Probabilistic Comparison of Commonly Used Interest Measures for Association Rules.

A Probabilistic Comparison of Commonly Used Interest Measures for Association Rules > Research on Association Rules This page contains a collection of commonly used measures of significance and interestingness for association rules and itemsets. 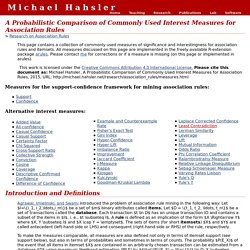 All measures discussed on this page are implemented in the freely available R-extension package arules. Please contact me for corrections or if a measure is missing (on this page or implemented in arules). This work is licensed under the Creative Commons Attribution 4.0 International License. Introduction to Market Basket Analysis » Loren on the Art of MATLAB. You probably heard about the "beer and diapers" story as the often quoted example of what data mining can achieve.

It goes like this: some supermarket placed beer next to diapers and got more business because they mined their sales data and found that men often bought those two items together. Today's guest blogger, Toshi Takeuchi, who works in the web marketing team here at MathWorks, gives you a quick introduction to how such analysis is actually done, and will follow up with how you can scale it for larger dataset with MapReduce (new feature in R2014b) in a future post.

Contents Motivation: "Introduction to Data Mining" PDF I have been interested in Market Basket Analysis not because I work at a supermarket but because it can be used for web usage pattern mining among many applications. Let's start by loading the example dataset used in the textbook. Itemset and Support. GitHub - toshiakit/apriori: Market Basket Analysis with MATLAB. EDA MCA. Categorical variable. Categorical data is the statistical data type consisting of categorical variables or of data that has been converted into that form, for example as grouped data. More specifically, categorical data may derive from either or both of observations made of qualitative data, where the observations are summarised as counts or cross tabulations, or of quantitative data, where observations might be directly observed counts of events happening or might be counts of values that occur within given intervals.

Self organised maps for binary data-is right choice? - ResearchGate. SOM Toolbox: implementation of the algorithm. On this page, the structure of SOM and the SOM algorithm are described. The indented paragraphs give further details of the implementation in SOM Toolbox.In SOM Toolbox, all information regarding a SOM is gathered in a map struct. This struct has a number of fields, including the map codebook, map topology, component names and training history. There are also other structs, for example topology and training structs. Structure of SOM. Clustering in Matlab. What is a good clustering algorithm on hybrid dataset composed of both numerical and categorical data? - ResearchGate. K-Means clustering for mixed numeric and categorical data - Data Science Stack Exchange. The standard k-means algorithm isn't directly applicable to categorical data, for various reasons.

The sample space for categorical data is discrete, and doesn't have a natural origin. A Euclidean distance function on such a space isn't really meaningful. As someone put it, "The fact a snake possesses neither wheels nor legs allows us to say nothing about the relative value of wheels and legs. " What is the difference between categorical, ordinal and interval variables? What is the difference between categorical, ordinal and interval variables? In talking about variables, sometimes you hear variables being described as categorical (or sometimes nominal), or ordinal, or interval. Below we will define these terms and explain why they are important. Categorical A categorical variable (sometimes called a nominal variable) is one that has two or more categories, but there is no intrinsic ordering to the categories.

Latent Class Analysis Software. MLLSA (Maximum Likelihood Latent Structure Analysis), written by the late Clifford Clogg, is a bit old but still a good way to learn LCA. Download an earlier PC version of MLLSA; mllsa.zip (44k bytes; zipped with PKZIP) contains executable code, sample input/output files, and abbreviated instructions for use. Fuller instructions are given in an Appendix to Allan McCutcheon's (1987) monograph from Sage Publications. Alternatively, jump to the web site of Scott Eliason to download the most recent version of MLLSA, as well as other programs of his CDAS (Categorical Data Analysis System).

The basic idea behind the Kohonen network is to setup a structure of interconnected processing units ("neurons") which compete for the signal. While the structure of the map may be quite arbitrary, this package supports only rectangular and linear maps. l16.pdf. SOM tutorial part 1. Principal Component Analysis 4 Dummies: Eigenvectors, Eigenvalues and Dimension Reduction. K-means Clustering in Matlab. Clustering data is the act of partitioning observations into groups, or clusters, such that each data point in the subset shares similar characteristics to its corresponding members.