Ethereum will scale. Ethereum Classic will remain immutable: What do you want for your dApp? – Medium. Ethereum is sometimes misunderstood by both Ethereum enthusiasts and its detractors. 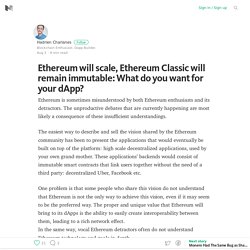 The unproductive debates that are currently happening are most likely a consequence of these insufficient understandings. The easiest way to describe and sell the vision shared by the Ethereum community has been to present the applications that would eventually be built on top of the platform: high scale decentralized applications, used by your own grand-mother. These applications’ backends would consist of immutable smart contracts that link users together without the need of a third party: decentralized Uber, Facebook etc. One problem is that some people who share this vision do not understand that Ethereum is not the only way to achieve this vision, even if it may seem to be the preferred way. The proper and unique value that Ethereum will bring to its dApps is the ability to easily create interoperability between them, leading to a rich network effect. 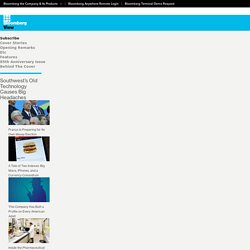 The Libyan Investment Authority is suing Goldman Sachs over some trades that they did together. To oversimplify slightly, the LIA handed Goldman a pile of money and signed some complicated contracts describing the circumstances in which Goldman would have to give LIA money back, and how much. And then everyone closed their eyes and counted to 10, and when they opened their eyes, poof, the money was gone.

It was $1.2 billion. Libya is mad, and suing. The LIA has various arguments in its lawsuit, but none of them amount to "Goldman owes us money under those contracts. " Instead, Libya's arguments take the form of: We didn't really mean what those contracts said. Whatever you think about those arguments -- my own views are complicated -- they are definitely the kinds of arguments that are, like, allowed in court. One more story, one of my all-time favorites. 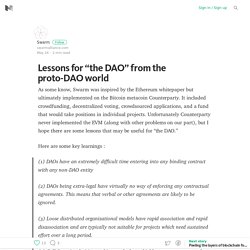 It included crowdfunding, decentralized voting, crowdsourced applications, and a fund that would take positions in individual projects. Unfortunately Counterparty never implemented the EVM (along with other problems on our part), but I hope there are some lessons that may be useful for “the DAO.” Here are some key learnings : (1) DAOs have an extremely difficult time entering into any binding contract with any non-DAO entity (2) DAOs being extra-legal have virtually no way of enforcing any contractual agreements. . (3) Loose distributed organizational models have rapid association and rapid disassociation and are typically not suitable for projects which need sustained effort over a long period. (6) Most p2p businesses that work have a platform as middleman which is able to take a profit.

Is The DAO going to be DOA? — Steemit. The DAO is the latest Decentralized, Autonomous Organization to make major waves as they raised over $100 million worth of ETH tokens (12% of all ETH). 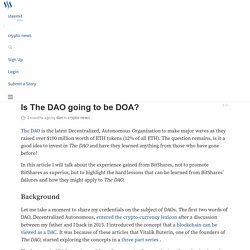 A $50M Hack Tests the Values of Communities Run by Code. June 17, 2016 was an important day for the small but dedicated community that has formed around the nascent decentralized technology known as Ethereum, and for the blockchain community more generally. 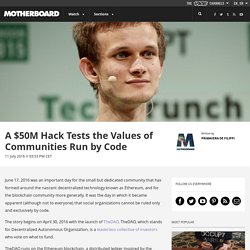 It was the day in which it became apparent (although not to everyone) that social organizations cannot be ruled only and exclusively by code. The story begins on April 30, 2016 with the launch of TheDAO. TheDAO, which stands for Decentralized Autonomous Organization, is a leaderless collective of investors who vote on what to fund. TheDAO runs on the Ethereum blockchain, a distributed ledger inspired by the Bitcoin blockchain. Ethereum has its own digital currency, known as Ether. The Truth about the Fork. Many foundation developers (including me) have come forward about their dao holdings. 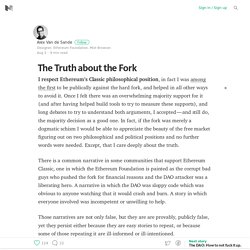 Most (including our Executive director, Ming Chan) have none, some have very small amounts. Many have openly criticized the DAO. Of course, one can argue that we could be lying, or that the big holders are not disclosing but in all internal and private discussions I’ve had within the team, “saving my holdings” was never even brought up. Maybe there’s some shadow figure lurking behind the developers and influencing the foundation’s decision, but they are certainly not among any of the coders I talked to.

Even among those who owned part of the DAO, they had very small amounts, relative to their Ether holdings. From my experience, I’ve seen the opposite happening. How to Create Money out of the Ether. Maybe money really is a shared hallucination. 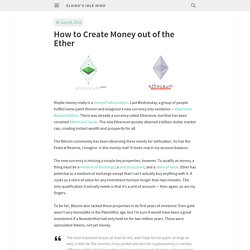 Last Wednesday, a group of people huffed some paint thinner and imagined a new currency into existence — Ethereum: Bailout Edition. There was already a currency called Ethereum, but that has been renamed EthereumClassic.