Mapping The C64. Technologically Induced Coma: Understanding 6502 assembly on the Commodore 64 - (6) Our instructions to assembly. In chapter 3 we listed all of the instructions we had done with regard to memory modification to achieve or goal. 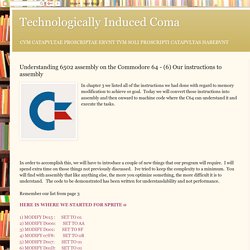 Today we will convert those instructions into assembly and then onward to machine code where the C64 can understand it and execute the tasks. In order to accomplish this, we will have to introduce a couple of new things that our program will require. I will spend extra time on those things not previously discussed. Ive tried to keep the complexity to a minimum. You will find with assembly that like anything else, the more you optimize something, the more difficult it is to understand. Lets get started!!!!!! 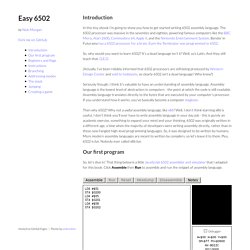 The 6502 processor was massive in the seventies and eighties, powering famous computers like the BBC Micro, Atari 2600, Commodore 64, Apple II, and the Nintendo Entertainment System. Bender in Futurama has a 6502 processor for a brain. Even the Terminator was programmed in 6502. So, why would you want to learn 6502? Arnold.c64.org. GB64.COM - C64 Games, Database, Music, Emulation, Frontends, Reviews and Articles. C64 Emulatoren & Spiele. C64.CH - The C64 Demo Portal - Programming. Index of /pixcen/versions. CGSC Homepage. C64Games.de - The C64 WebRessource. GitHub - ricardoquesada/vchar64: editor for the Commodore 64. C64.COM - To Protect and Preserve. C64 and Retro Coding Links · mar77i/c64 Wiki. Retro Computing literature Emulators and Virtualmachines VICE Pretty much the most complete CBM emulator out there.IBNIZ A really interesting and compact demo coding platform Various Sources. 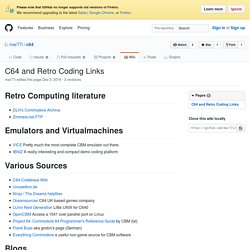 CodeBrane Blog. I’ve been rebooting my interest in the Commodore 64 recently, after a layoff of around 20 years! 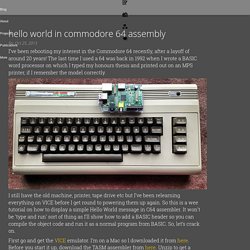 The last time I used a 64 was back in 1992 when I wrote a BASIC word processor on which I typed my honours thesis and printed out on an MPS printer, if I remember the model correctly. I still have the old machine, printer, tape drive etc but I’ve been relearning everything on VICE before I get round to powering them up again. So this is a wee tutorial on how to display a simple Hello World message in C64 assembler. It won’t be ‘type and run’ sort of thing as I’ll show how to add a BASIC header so you can compile the object code and run it as a normal program from BASIC. So, let’s crack on. First go and get the VICE emulator. The Commodore 64 Scene Database. MEGA65 8-bit computer. 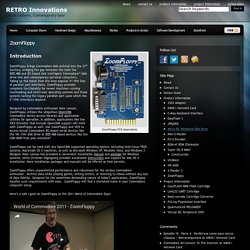 Taking up the baton from the ever-popular X*-1541 line of parallel port interfaces, ZoomFloppy provides complete functionality for newer machines running multitasking and multi-user operating systems and those systems lacking the legacy parallel port upon which the X*-1541 interfaces depend. Designed by Commodore enthusiast Nate Lawson, ZoomFloppy utilizes the ubiquitous OpenCBM Commodore device access libraries and application utilities for operation. In addition, applications like the VICE Emulator that include OpenCBM support will work with ZoomFloppy as well. 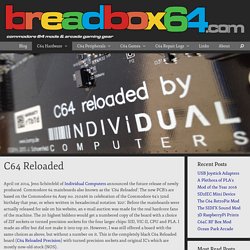 The new PCB’s are based on the Commodore 64 Assy no. 250466 in celebration of the Commodore 64’s 32nd birthday that year, or when written in hexadecimal notation ‘$20’. Before the mainboards were actually released for sale on his website, an e-mail auction was made for the real hardcore fans of the machine. The 20 highest bidders would get a numbered copy of the board with a choice of ZIF sockets or turned precision sockets for the four larger chips: SID, VIC-II, CPU and PLA. 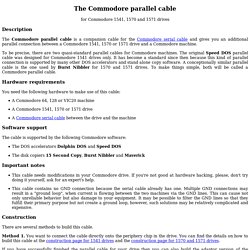 To be precise, there are two quasi-standard parallel cables for Commodore machines. The original Speed DOS parallel cable was designed for Commodore 1541 drives only. It has become a standard since then because this kind of parallel connection is supported by many other DOS accelerators and stand alone copy software. SD2IEC Info. Of all the methods of loading stuff into your Commodore, the SD2IEC family of SD readers are the business. 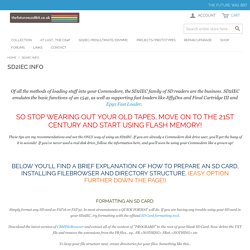 SD2IEC emulates the basic functions of an 1541, as well as supporting fast loaders like JiffyDos and Final Cartridge III and Epyx Fast Loader. These tips are my recommendations and not the ONLY way of using an SD2IEC. If you are already a Commodore disk drive user, you’ll get the hang of it in seconds! If you’ve never used a real disk drive, follow the information here, and you’ll soon be using your Commodore like a grown up! Below you'll find a brief explanation of how to prepare an SD card, installing FileBrowser and directory structure. Formatting an SD card: Cables and adaptors. The following cables and adaptors are discussed on these pages. 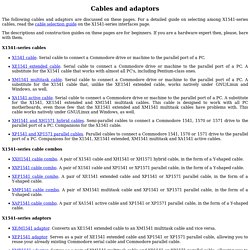 For a detailed guide on selecting among X1541-series cables, read the cable selection guide on the X1541-series interfaces page. The descriptions and construction guides on these pages are for beginners. If you are a hardware expert then, please, bare with them. All_About_Your_64-Online-Help Version 0.64. All_About_Your_1541-Online-Help Version 0.23. CBM prg Studio. Main Application Below is the main application window, which shows the 'Balloon' sample BASIC program. 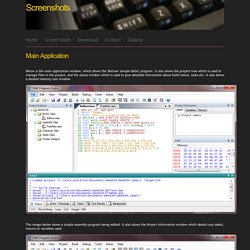 Cc65 - a freeware C compiler for 6502 based systems. Content Overview cc65 is a complete cross development package for 65(C)02 systems, including a powerful macro assembler, a C compiler, linker, librarian and several other tools. cc65 has C and runtime library support for many of the old 6502 machines, including. Commodore 64 Programmer's Reference Guide. D64 Editor. Turbo Macro Pro Sep'06/Style - tool (DTV v2, DTV v1, C64) - released Sep 30, 2006. Turbo Assembler: About the Turbo Assembler Homepage. Turbo Assembler is a native c64 assembler which was introduced in 1985 by the German company, Omikron. Aside from Omikron, the software credits only one author: Wolfram Roemhild. Over the years, Turbo Assembler has become the most modified piece of c64 software ever. There are other programs that vie for the title, for sure - how many versions of CCGMS are in your diskbox? Dir Master and all of its many variants, oh yes, Cruel and Time too... but none of these have the sheer number of modified versions as Turbo Assembler.

This site's mission is twofold: Serve as the online home for the Turbo Macro Pro line of software, a collection of advanced modifications developed and maintained by Style, as well as TMPx, a Turbo Macro Pro compatible cross assembler. In our quest to collect as many modified versions of Turbo as possible, we invite any interested and willing people to help. Send us any missing modifications that we haven't documented as in the archive. 2.2. An Example Interrupt. Kick Assembler. This is the homepage of Kick Assembler. Kick Assembler is the combination of an assembler for doing 6510 machine code and a high level script language.

I offer the most common X cables that Joe Forster/STA lists on his site, not the X adapters as I have no ability to make the PC boards required. Special cables not listed below will be considered on a case by case basis and if I have the parts to build them. Not all the information that is present on Joe's site is here. There's much to learn about and glean from Joe's web pages, so I do recommend reading them to the fullest. The prices for the cables are in Canadian dollars and do not include shipping. If you need help choosing a cable, look at my pick a cable matrix page to help.

Purchase or build the X-series cables. Deep Scan Burst Nibbler - C64 Copy ProtectionC64 Copy Protection. Xum1541 development page and firmware. Spiro's homepage - OpenCBM. This release mainly adds some bug fixes to OpenCBM. Have a look at the changes. Welcome to GTW64! – Games That Weren't - GTW64 - home of unreleased Commodore 64 games. Our 2000th GTW64 entry added! Many thanks to you all for your support and contributions over the years. Thanks to you, we have reached a milestone today with our 2000th GTW64 entry into the archive. Programming Books, part 3: Programming the Commodore 64. Today I want to talk about another vintage book — this one from 1985, eleven years after Kernighan and Pike’s Elements of Programing Style came out.

While EoPS is largely timeless, this one has aged dramatically; but it was so important to me twenty-something years ago, and embodies an era that I remember with such fondness, that couldn’t resist writing about it. R. C. C= 8bit Search / Retro Computer Scene. First the docs for the normal 5. World of FairLight. Beginners guide My own brief emulator FAQ, so kill the most common questions The Beginners guide to emulators was provided by Linus Åkerlund.