j160v02n01 02. Socioeconomic status and alcohol use disorders across the lifespan: A co-relative control study. Σκωτσεζικη μελετη. Health inequalities.Socioeconomic status as an effect modifier of alcohol consumption and harm: analysis of linked cohort data. MH Forouzanfar, A Afshin, LT Alexander, et al., for the GBD 2015 Risk Factors CollaboratorsGlobal, regional, and national comparative risk assessment of 79 behavioural, environmental and occupational, and metabolic risks or clusters of risks, 1990–2015: a systematic analysis for the Global Burden of Disease Study 2015 Lancet, 388 (2016), pp. 1659-1724 P Mäkelä, T PaljärviDo consequences of a given pattern of drinking vary by socioeconomic status? 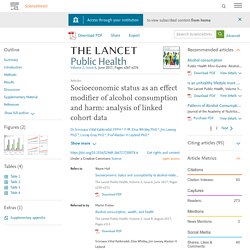 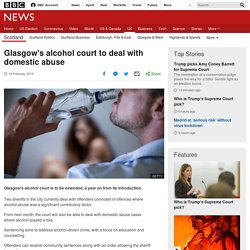 Two sheriffs in the city currently deal with offenders convicted of offences where alcohol abuse was a significant contributory factor. From next month, the court will also be able to deal with domestic abuse cases where alcohol played a role. Sentencing aims to address alcohol-driven crime, with a focus on education and counselling. Offenders can receive community sentences along with an order allowing the sheriff to monitor progress. So far, offenders convicted of domestic abuse have not been admitted to the alcohol court, but a new programme offering an alternative to custody will allow the court to consider these types of offence. Under the Caledonian System, now being rolled out in Glasgow, a convicted domestic abuser is enrolled on a programme which aims to address their violent behaviour and improve the lives of the women and children affected. 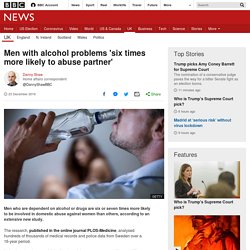 The research, published in the online journal PLOS-Medicine, analysed hundreds of thousands of medical records and police data from Sweden over a 16-year period. It also found an increased risk of partner violence among men with mental illnesses and behavioural disorders, though it was not as marked as in the group with a drink or drugs problems. University of Oxford Professor Seena Fazel, who led the study, said the findings suggest domestic violence could be reduced with improvements in drug and alcohol treatment services and better monitoring of offenders. "Treatment programmes for perpetrators have not been very effective to date - probably reflecting lack of high-quality evidence on risk factors that can be targeted," Prof Fazel told BBC News. Στο drive της Ειρήνης. Παρουσίαση χωρίς τίτλο. Psychiatric Interview Skills - CASC and OSCE Videos Online. Mental Health and Substance Abuse Social Workers.

Mental health and substance abuse social workers work with clients who have mental conditions and/or addictions. 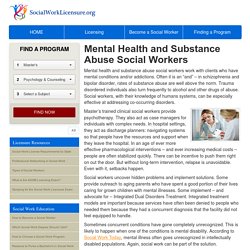 Often it is an “and” – in schizophrenia and bipolar disorder, rates of substance abuse are well above the norm. Trauma disordered individuals also turn frequently to alcohol and other drugs of abuse. Social workers, with their knowledge of humans systems, can be especially effective at addressing co-occurring disorders. Master’s trained clinical social workers provide psychotherapy. They also act as case managers for individuals with complex needs. Social workers uncover hidden problems and implement solutions. Sometimes concurrent conditions have gone completely unrecognized. Social workers need more training on drug and alcohol issues. First ever substance misuse framework for social workers launches. Simon Webster/REX Newly qualified social workers should be able to identify substance misuse, understand why people might misuse substances, recognise the impact on others such as children or other dependents and refer people on to other services, according to new guidance. 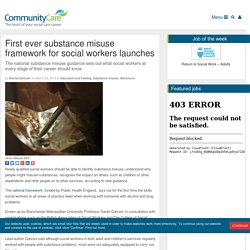 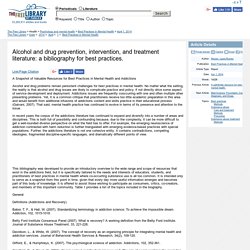 No matter what the setting, the reality is that alcohol and drug issues are likely to complicate practice and policy, if not directly drive some aspect of service development and deployment. Assessing the impact of addictions education on attitudes of students: a preliminary investigation. - Free Online Library. Education Requirements & Degrees. Overview Substance abuse social workers play a vital role in many fields as they help people find specialized solutions to their problems with substance abuse and addictions. 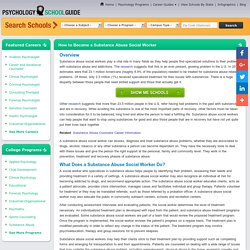 The research suggests that this is an ever present, growing problem in the U.S. In 2012, estimates were that 23.1 million Americans (roughly 8.9% of the population) needed to be treated for substance abuse related problems. Of those, only 2.5 million (1%) received specialized treatment for their issues with substances. There is a huge disparity between those people that need skilled support and those that actually get it. Other research suggests that more than 23.5 million people in the U.S. refer having had problems in the past with substances and are in recovery. 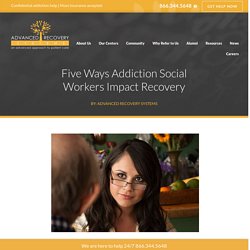 That is because a large part of their role has been to connect clients with the services needed to regain their health. Can social workers impact teen substance abuse? Hear about the caretakers on the frontlines. The potential causes of teen substance abuse are numerous. 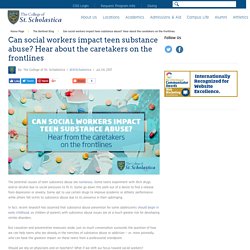 Some teens experiment with illicit drugs and/or alcohol due to social pressures to fit in. Some go down this path out of a desire to find a release from depression or anxiety. Some opt to use certain drugs to improve academic or athletic performance while others fall victim to substance abuse due to its presence in their upbringing.

SAMHSA - Substance Abuse and Mental Health Services Administration. Overview The adoption of recovery by behavioral health systems in recent years has signaled a dramatic shift in the expectation for positive outcomes for individuals who experience mental and/or substance use conditions. 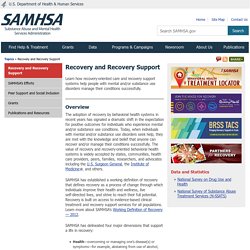 Today, when individuals with mental and/or substance use disorders seek help, they are met with the knowledge and belief that anyone can recover and/or manage their conditions successfully. The value of recovery and recovery-oriented behavioral health systems is widely accepted by states, communities, health care providers, peers, families, researchers, and advocates including the U.S. Surgeon General, the Institute of Medicine (link is external), and others. Career as an Addiction Social Worker. Addiction is a complex disease that presents enormous challenges not only for addicts, but also for their caregivers. Their craving for drugs easily overruns addicts' weakened willpower and causes relapses, but dedicated addiction social workers stick with their clients, helping them get back on track. People who choose to become addiction social workers have a special interest in providing that help. They are knowledgeable, compassionate professionals and demonstrate the unfailing commitment addicts need to work through the difficult times.

MMU1866 Alcohol and other drug use Report for web Final. Untitled.