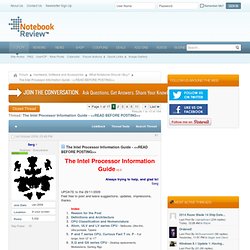 Definitions and ArchitecturesI) Processor Introduction So, we all hear about the computer parts, and the CPU is one of the most important parts. We always hear about it, but what is really? In plain words, the Central Processing Unit is the brain of the computer, as the name suggests it. It is the one taking care of your tasks, when you give an order, the CPU is the responsible for that order, and making sure it is done properly.In simple words, you give a command to the computer. The software sends the command all the over the CPU. This is something that makes multi-tasking easier and better, since HT and TB can run together. Studio XPS 16 CPU Upgrade? Studio XPS 16 CPU Upgrade? 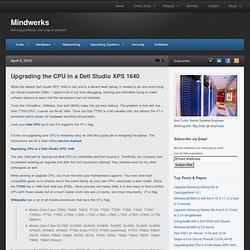 I spend a lot of my time debugging, hacking and otherwise trying to make software behave in ways that the developers had not intended. Tools like VirtualBox, VMWare, Xen and QEMU make this job less tedious. The problem is that with the Intel T7350 CPU, I cannot run 64 bit VMs. Turns out that T7250 is a 64 capable chip, but without the VT-x extension which allows for hardware assisted virtualization. Look your Intel CPU up to see if it supports the VT-x flag. Replacing CPU in a Dell Studio XPS 1640 The only hard part is figuring out what CPU is compatible and then buying it. When picking an upgrade CPU, you must find one your motherboard supports. Wikipedia has a list of all mobile processors that have the VT-x flag. A successor of the T7350 (Merom-2M) is the P8700 (Penryn-3M) and fits all my requirements to fit in the laptop.

Like this: Like Loading... Upgrading the CPU in a Dell Studio XPS 1640. Want to know if a CPU is compatible with your computer? - CPUs - CPUs. I've seen a lot of "Is this CPU compatible with my system" posts. 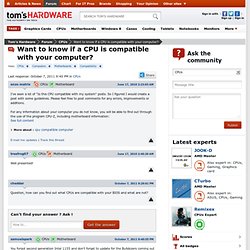 So I figured I would create a post with some guidelines. Please feel free to post comments for any errors, improvements or additions. For any information about your computer you do not know, you will be able to find out through the use of the program CPU-Z, including motherboard information: For CPU compatibility with your system, you will want to look at 4 things: 1. 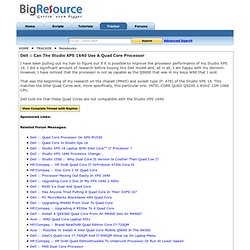