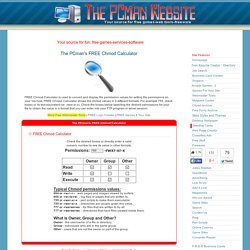 FREE Chmod Calculator shows the chmod values in 3 different formats. For example 755, check boxes or its text equivalent (ie: -rwxr-xr-x). Check the boxes below selecting the desired permissions for your file to obtain the value in a format that you can enter into your FTP program or telnet session. More Free Webmaster Tools | FREE Logo Creator | FREE Games 4 Your Site New features are always added so check back often. With the hosts allow option, we've specified a 192.168.220 IP address, which is equivalent to saying: "All hosts on the 192.168.220 subnet. 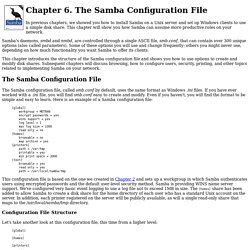 " However, we've explicitly specified in a hosts deny line that 192.168.220.102 is not to be allowed access. You might be wondering why 192.168.220.102 will be denied even though it is still in the subnet matched by the hostsallow option. It is important to understand how Samba sorts out the rules specified by hostsallow and hosts deny : If no allow or deny options are defined anywhere in smb.conf, Samba will allow connections from any system.If hosts allow or hosts deny options are defined in the [global] section of smb.conf, they will apply to all shares, even if either option is defined in one or more of the shares.If only a hosts allow option is defined for a share, only the hosts listed will be allowed to use the share.

Let's look at another example of that final item. How to align partitions for best performance using parted. There are two common problems when creating partitions in Linux on big storage arrays. 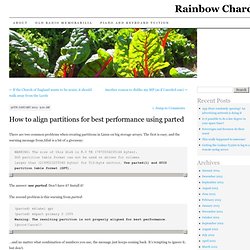 The first is easy, and the warning message from fdisk is a bit of a giveaway: Www.gnu.org/software/parted/manual/parted.pdf. Fstab updating and remounting without reboot. Linux Creating a Partition Size Larger Than 2TB. Frankly speaking, you cannot create a Linux partition larger than 2 TB using the fdisk command. 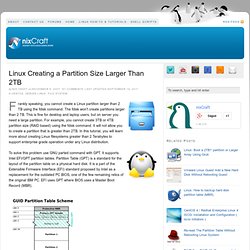 The fdisk won't create partitions larger than 2 TB. This is fine for desktop and laptop users, but on server you need a large partition. For example, you cannot create 3TB or 4TB partition size (RAID based) using the fdisk command. It will not allow you to create a partition that is greater than 2TB. In this tutorial, you will learn more about creating Linux filesystems greater than 2 Terabytes to support enterprise grade operation under any Linux distribution. To solve this problem use GNU parted command with GPT. (Fig.01: Diagram illustrating the layout of the GUID Partition Table scheme. Linux GPT Kernel Support EFI GUID Partition support works on both 32bit and 64bit platforms. File Systems Partition Types [*] Advanced partition selection [*] EFI GUID Partition support (NEW) .... Find Out Current Disk Size. How to Create a Network Share Via Samba Via CLI (Command-line interface/Linux Terminal) - Uncomplicated, Simple and Brief Way!

In this text, I teach how to create a network share via Samba using the CLI (Command-line interface/Linux Terminal) in an uncomplicated, simple and brief way targeting Windows users. 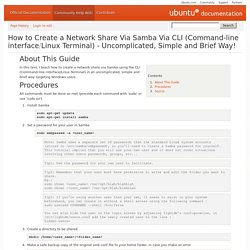 All commands must be done as root (precede each command with 'sudo' or use 'sudo su'). Install Samba sudo apt-get update sudo apt-get install sambaSet a password for your user in Samba sudo smbpasswd -a <user_name>Note: Samba uses a separate set of passwords than the standard Linux system accounts (stored in /etc/samba/smbpasswd), so you'll need to create a Samba password for yourself. This tutorial implies that you will use your own user and it does not cover situations involving other users passwords, groups, etc...Tip1: Use the password for your own user to facilitate.Tip2: Remember that your user must have permission to write and edit the folder you want to share.

Mount. Data on a computer, as you may know, is stored in binary as a series of 1s and 0s. 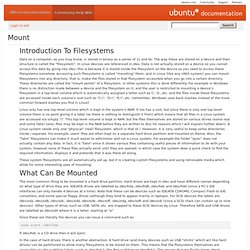 The way these are stored on a device and their structure is called the "filesystem". In Linux devices are referenced in /dev. Data is not actually stored on a device so you cannot access this data by going into /dev, this is because it is stored inside the filesystem on the device so you need to access these filesystems somehow. Accessing such filesystems is called "mounting" them, and in Linux (like any UNIX system) you can mount filesystems into any directory, that is, make the files stored in that filesystem accessible when you go into a certain directory. These directories are called the "mount points" of a filesystem. Linux only has one top-level volume which is kept in the system's RAM.

Fstab. The configuration file /etc/fstab contains the necessary information to automate the process of mounting partitions. 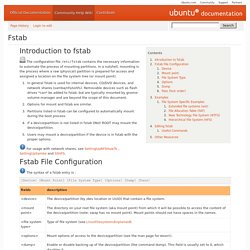 In a nutshell, mounting is the process where a raw (physical) partition is prepared for access and assigned a location on the file system tree (or mount point). In general fstab is used for internal devices, CD/DVD devices, and network shares (samba/nfs/sshfs). Removable devices such as flash drives *can* be added to fstab, but are typically mounted by gnome-volume-manager and are beyond the scope of this document.

Options for mount and fstab are similar. Partitions listed in fstab can be configured to automatically mount during the boot process. For usage with network shares, see SettingUpNFSHowTo , SettingUpSamba and SSHFS. InstallingANewHardDrive. While it's not every day that you need to add a new hard drive to your computer, the task does not have to be complicated. 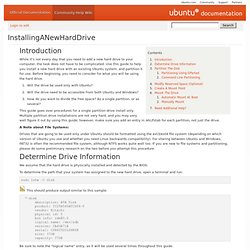 Use this guide to help you install a new hard drive with an existing Ubuntu system, and partition it for use. Before beginning, you need to consider for what you will be using the hard drive. Will the drive be used only with Ubuntu? Will the drive need to be accessible from both Ubuntu and Windows? How do you want to divide the free space? Samba. Samba is an implementation of the Server Message Block (SMB)/Common Internet File System (CIFS) protocol for Unix systems, providing support for cross-platform file and printer sharing with Microsoft Windows, OS X, and other Unix systems. 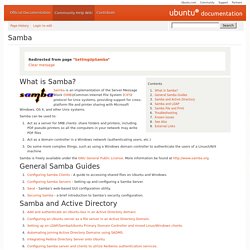 Samba can be used to: Act as a server for SMB clients: share folders and printers, including PDF pseudo-printers so all the computers in your network may write PDF files Act as a domain controller in a Windows network (authenticating users, etc.) Do some more complex things, such as using a Windows domain controller to authenticate the users of a Linux/UNIX machine Samba is freely available under the GNU General Public License. More information be found at Configuring Samba Clients - A guide to accessing shared files on Ubuntu and Windows. The first thing you should do, before looking into your conf files, is ensure that the directory you are sharing actually exists. CategoryNetworking. Create a shortcut to (map) a network drive - Windows Help.