Marvel Knows How to Be Popular in the App Economy. When you’re a company like Marvel, a brand that’s been going strong since the 1940s and touting iconic characters like Captain America and The Hulk, you probably want to expand to new channels. 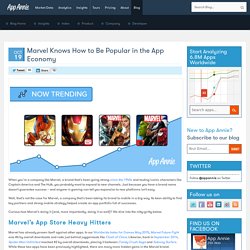 Just because you have a brand name doesn’t guarantee success – and anyone in gaming can tell you expansion to new platforms isn’t easy. Well, that’s not the case for Marvel, a company that’s been taking its brand to mobile in a big way. Its keen ability to find key partners and strong mobile strategy helped create an app portfolio full of successes. Curious how Marvel’s doing it (and, more importantly, doing it so well)? 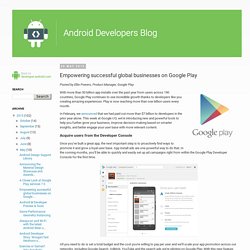 Play is now reaching more than one billion users every month. In February, we announced that we had paid out more than $7 billion to developers in the prior year alone. This week at Google I/O, we’re introducing new and powerful tools to help you further grow your business, improve decision making based on smarter insights, and better engage your user base with more relevant content. Scroll behavior across the web - Chartbeat Blog Chartbeat Blog.

You might’ve come across our graphic on Engaged Time below the fold at some point in the last few months in AdAge, Buzzfeed, or on the blog. 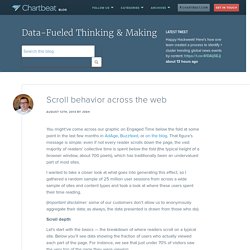 That figure’s message is simple: even if not every reader scrolls down the page, the vast majority of readers’ collective time is spent below the fold (the typical height of a browser window, about 700 pixels), which has traditionally been an undervalued part of most sites. I wanted to take a closer look at what goes into generating this effect, so I gathered a random sample of 25 million user sessions from across a wide sample of sites and content types and took a look at where these users spent their time reading. (Important disclaimer: some of our customers don’t allow us to anonymously aggregate their data; as always, the data presented is drawn from those who do). Scroll depth Let’s start with the basics — the breakdown of where readers scroll on a typical site. There are a few notable trends: Scroll engagement Expected time in view.

How to A/B Test Your App Icon. App icons, aside from your preview images and name, can be the deciding factor when a user opts to download your app or not.

Despite taking up only a few hundred pixels, your icon holds immense power. How to Design Your App Icon. Figuring Out the Best Keywords for Your App. When you’re building out your app marketing strategy, one of the most crucial steps is identifying the right app keywords. 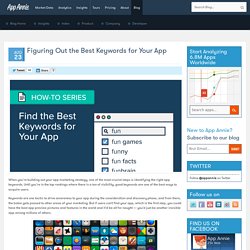 Until you’re in the top rankings where there is a ton of visibility, good keywords are one of the best ways to acquire users. Keywords are one tactic to drive awareness to your app during the consideration and discovery phase, and from there, the baton gets passed to other areas of your marketing. App Store Optimization (ASO): How To Design the Best Screenshots. App Store Optimization (ASO) is a tricky science. 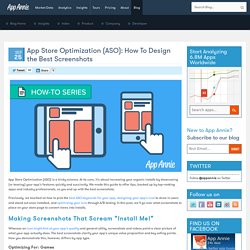 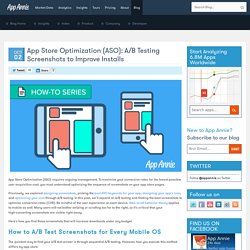 To maximize your conversion rates for the lowest possible user acquisition cost, you must understand optimizing the sequence of screenshots on your app store pages. Previously, we explored designing screenshots, picking the best ASO keywords for your app, designing your app’s icon, and optimizing your icon through A/B testing. In this post, we’ll expand on A/B testing and finding the best screenshots to optimize conversion rates (CVR).

Be mindful of the user experience on each device. Web scroll behavior theory applies to mobile as well. Here’s how you find those screenshots that will increase downloads under any budget. Tanal Barakat's Blog - Submitting Your Game to Indiecade - And Other Game Dev Lessons. The following blog post, unless otherwise noted, was written by a member of Gamasutra’s community. 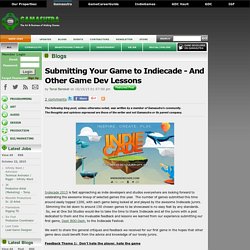 The thoughts and opinions expressed are those of the writer and not Gamasutra or its parent company. Indiecade 2015 is fast approaching as indie developers and studios everywhere are looking forward to celebrating the awesome lineup of selected games this year. The number of games submitted this time around easily topped 1200, with each game being looked at and played by the awesome Indiecade jurors. Slimming the list down to around 150 chosen games to be showcased is no easy feat by any standards. So, we at One Sol Studios would like to take the time to thank Indiecade and all the jurors with a post dedicated to them and the invaluable feedback and lessons we learned from our experience submitting our first game, Dash BOO Dash, to the Indiecade Festival.

Feedback Theme 1: Don’t hate the player, hate the game You have our gratitude, juror #1!!! Thank you so so much, juror #2!!! Recap. Our story × Supercell. Our first game was called Gunshine.net. 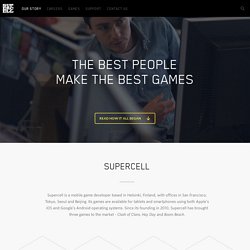 It was a real-time massively multiplayer online role-playing game. Remember, our original vision was to create cross-platform gaming services, so the idea was that one day players would be able to enter the world of Gunshine via desktop web, Facebook, tablet and mobile. That said, we had to start from somewhere, and the most logical place was the platform with the widest reach. Phil Strahl's Blog - Line the Pipes! or Testing Your Mechanics for Flow. 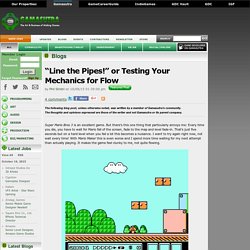 The thoughts and opinions expressed are those of the writer and not Gamasutra or its parent company. Super Mario Bros 3 is an excellent game.