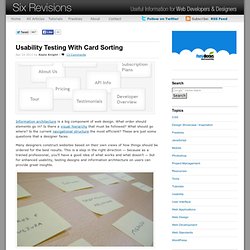 What order should elements go in? Is there a visual hierarchy that must be followed? What should go where? Is the current navigational structure the most efficient? These are just some questions that a designer faces. Many designers construct websites based on their own views of how things should be ordered for the best results. Photo by Ivo Gomes. Card sorting is a usability methodology that has been used by information architects for years to organize web designs and web content more effectively.

Why Use Card Sorting? Users might not agree with a designer about the way content and design elements should be organized. Card sorting is a free or inexpensive method that can be used to help determine optimal website layouts, navigation structure, wording of website copy, how to arrange blocks of text, and more. Unique Selling Point. Unique Selling Points, USPs (or sometimes called Key Selling Points) are the elements that make your game stand out, what makes it better than and/or different than titles from the competition. 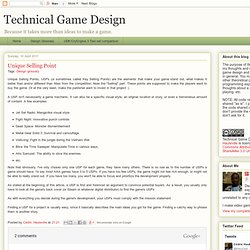 Note the "Selling" part. These points are supposed to make the players want to buy the game. Or at the very least, make the publisher want to invest in that project :) A USP isn't necessarily a game mechanic. It can also be a specific visual style, an original location or story, or even a tremendous amount of content. Jet Set Radio: Manga-like visual styleFight Night: Innovative punch controlsDead Space: Monster dismembermentMetal Gear Solid 3: Survival and camouflageVietcong: Fight in the jungle during the Vietnam WarBlinx the Time Sweeper: Manipulate Time in various ways.Afro Samuraï: The ability to slice the enemies.etc. Note that obviously, I've only chosen only one USP for each game, they have many others. Diablo 3's Seven Design Pillars drove the game's creation. When Jay Wilson announced his departure from Diablo 3 I read over a bunch of old interviews with him, both to update the wiki article and to refresh my memory on Diablo 3′s development. 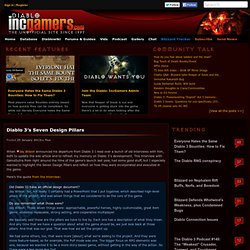 This interview with GamaSutra from right around the time of the game’s launch last year, had some good stuff, but I especially wanted to highlight the Seven Design Pillars and reflect on how they were incorporated and executed in the game. Here’s the quote from the interview: Did Diablo III have an official design document? Jay Wilson: No, not really. Do you remember what those were? We basically said these are the pillars we have to live by. We had some others, too, that were more [about] what we’re adding to the project. Let’s take those one by one, shall we? Loading ... 1) Approachable They certainly succeeded with this one, though many of our most heated pre-game arguments were about “dumbed down” vs. 2) Powerful Heroes I think they did well on this. 3) Highly Customizable.

Pillars. Pillars, as the name suggests, are the foundations of a game. 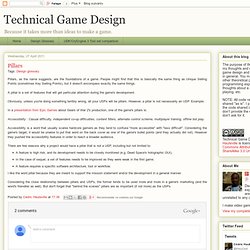 People might find that this is basically the same thing as Unique Selling Points (sometimes Key Selling Points), but it doesn't encompass exactly the same things. A pillar is a set of features that will get particular attention during the game's development. Obviously, unless you're doing something terribly wrong, all your USPs will be pillars. However, a pillar is not necessarily an USP. Example: Accessibility : Casual difficulty, independent co-op difficulties, content filters, alternate control scheme, multiplayer training, offline bot play. 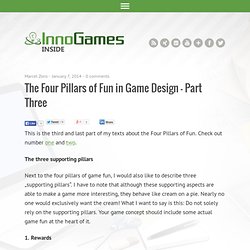 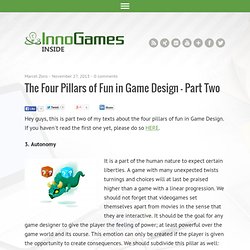 If you haven´t read the first one yet, please do so HERE. 3. Autonomy It is a part of the human nature to expect certain liberties. A game with many unexpected twists turnings and choices will at last be praised higher than a game with a linear progression. 4. I have to admit: this pillar is only relevant for games with multiplayer features. To be continued… Share and Enjoy. The Four Pillars of Fun in Game Design – Part One.

I regularly get the feeling that it is important to make one’s self aware of the significance of actual “game fun”, or how entertaining a game is – and to actively focus on it. 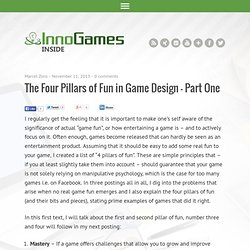 Often enough, games become released that can hardly be seen as an entertainment product. Assuming that it should be easy to add some real fun to your game, I created a list of “4 pillars of fun”. These are simple principles that – if you at least slightly take them into account – should guarantee that your game is not solely relying on manipulative psychology, which is the case for too many games i.e. on Facebook. In three postings all in all, I dig into the problems that arise when no real game fun emerges and I also explain the four pillars of fun (and their bits and pieces), stating prime examples of games that did it right. In this first text, I will talk about the first and second pillar of fun, number three and four will follow in my next posting: No fun? The 4 pillars of making a truly great game, according to Insomniac. 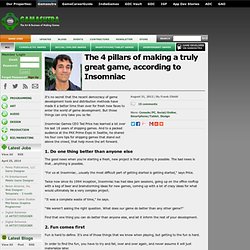 But those things can only take you so far. Insomniac Games CEO Ted Price has learned a lot over his last 18 years of shipping games. And to a packed audience at the PAX Prime Expo in Seattle, he shared his four core tips for shipping games that stand out above the crowd, that help move the art forward. The good news when you're starting a fresh, new project is that anything is possible. The bad news is that...anything is possible. "For us at Insomniac...usually the most difficult part of getting started is getting started," says Price. Twice now since its 1994 inception, Insomniac has had idea jam sessions, going up on the office rooftop with a keg of beer and brainstorming ideas for new games, coming up with a lot of crazy ideas for what would ultimately be a very complex project.