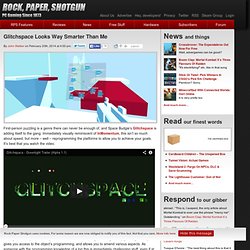 First-person puzzling is a genre there can never be enough of, and Space Budgie’s Glitchspace is adding itself to the gang. Immediately visually reminiscent of InMomentum, this isn’t so much about speed, but more – well – reprogramming the platforms to allow you to achieve your goals. It’s best that you watch the video. Having had a play of it, it really is as involved as it looks. Right clicking on any glitching red object gives you access to the object’s programming, and allows you to amend various aspects. The game is currently available in alpha from IndieGameStand, itch.io, and Gumroad, for $4.99/£2.99, and on Greenlight for what I would assume is a fairly guaranteed spot on Steam. Kung-Fu Chess. Kung-Fu Chess is a chess variant without turns, therefore being related as a real-time strategy game. 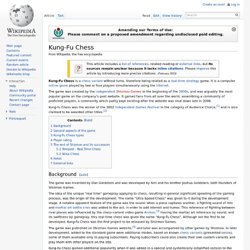 It is a computer online game played by two or four players simultaneously using the Internet. Kung-fu Chess was the winner of the 2002 Independent Games Festival in the category of Audience Choice,[1] and is also claimed to be awarded other titles.[2] Background[edit] The game was invented by Dan Goldstein and was developed by him and his brother Joshua Goldstein, both founders of Shizmoo Games.

The idea of the unique "real time" gameplay applying to chess, resulting in general significant speeding of the gaming process, was the origin of the development. The game was published on Shizmoo Games website,[4] and later was accompanied by other games by Shizmoo. Kung-Fu Chess gained additional popularity when it was added in a special and systemically-simplified version to the ICQ instant messaging program in 2005, along with "Sumo Volleyball", another popular game by Shizmoo.

Notes[edit] Chess 2: The Sequel — Ludeme Games. The Banner Saga review. The Banner Saga is a tactical RPG that's been pushing its way into my thoughts even when I'm occupied with other things. Its epic tale tells of a sun that no longer sets, the death of the old gods and a land on the brink of war - but it is the more mundane burdens of leadership that weigh most heavily on my mind. I'm haunted by the disheartening discovery of spoiled supplies that dented the morale of a beleaguered caravan, and the foolish gambit that saw a decorated warrior lost to the ignominy of freak accident.

The crushing guilt of losing people to starvation because I purchased a trinket to protect a favoured archer in battle, rather than ensure a surplus of supplies for the journey ahead, acts as its own damning indictment of my leadership. You too may come to rue these misfortunes or, by exercising better judgement than I, you might avoid them entirely. Dialogue choices are best made as judgement calls rather than trying to second-guess the game's intentions. King Arthur's Gold. Create an account (if you haven't already) Frequently Asked Questions How do I buy the game? Go here and pay with your desired method.

Simple! Can you fix this bug? Yes. How do I make a forum account? Make a KAG account - your KAG login details 'just work' on the forums. Can you add xyz feature to the game? Long story short, maybe, probably not. How can I help? 2048. Join the numbers and get to the 2048 tile! 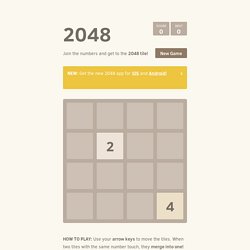 New Game How to play: Use your arrow keys to move the tiles. When two tiles with the same number touch, they merge into one! Note: The game on this site is the original version of 2048. Apps for iOS and Android are also available. Hack The Planet: Early Access Granted To Hack ‘N’ Slash. By Alice O'Connor on May 7th, 2014 at 3:00 pm. 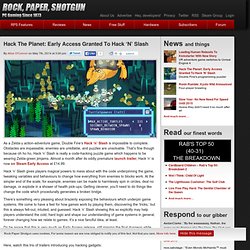 As a Zelda-y action-adventure game, Double Fine’s Hack ‘n’ Slash is impossible to complete. Obstacles are impassable, enemies are unkillable, and puzzles are unsolvable. That’s fine though because oh ho ho, Hack ‘n’ Slash is really a code-hacking puzzle game which happens to be wearing Zelda-green jimjams. Almost a month after its oddly premature launch trailer, Hack ‘n’ is now on Steam Early Access at £14.99. Hack ‘n’ Slash gives players magical powers to mess about with the code underpinning the game, tweaking variables and behaviours to change how everything from enemies to blocks work. There’s something very pleasing about brazenly exposing the behaviours which underpin game systems. Do be aware that this is very much an Early Access release, still missing the final dungeon while Double Fine wait on player feedback to tune the puzzles.