Setting up Django and your web server with uWSGI and nginx — uWSGI 2.0 documentation. This tutorial is aimed at the Django user who wants to set up a production web server. 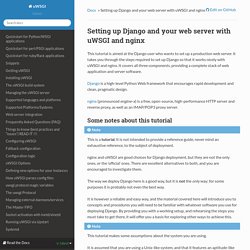 It takes you through the steps required to set up Django so that it works nicely with uWSGI and nginx. It covers all three components, providing a complete stack of web application and server software. Django is a high-level Python Web framework that encourages rapid development and clean, pragmatic design. nginx (pronounced engine-x) is a free, open-source, high-performance HTTP server and reverse proxy, as well as an IMAP/POP3 proxy server. Some notes about this tutorial¶ Note This is a tutorial. Nginx and uWSGI are good choices for Django deployment, but they are not the only ones, or the ‘official’ ones.

The way we deploy Django here is a good way, but it is not the only way; for some purposes it is probably not even the best way. This tutorial makes some assumptions about the system you are using. Concept¶ Configuring HTTPS servers. To configure an HTTPS server, the ssl parameter must be enabled on listening sockets in the server block, and the locations of the server certificate and private key files should be specified: The server certificate is a public entity. 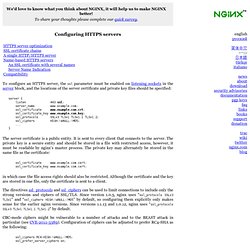 It is sent to every client that connects to the server. The private key is a secure entity and should be stored in a file with restricted access, however, it must be readable by nginx’s master process. The private key may alternately be stored in the same file as the certificate: ssl_certificate www.example.com.cert; ssl_certificate_key www.example.com.cert; in which case the file access rights should also be restricted. The directives ssl_protocols and ssl_ciphers can be used to limit connections to include only the strong versions and ciphers of SSL/TLS. CBC-mode ciphers might be vulnerable to a number of attacks and to the BEAST attack in particular (see CVE-2011-3389). 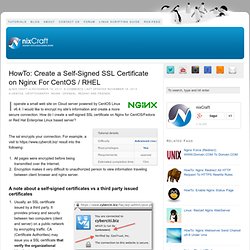 I would like to encrypt my site's information and create a more secure connection. How do I create a self-signed SSL certificate on Nginx for CentOS/Fedora or Red Hat Enterprise Linux based server? The ssl encrypts your connection. For example, a visit to result into the following:All pages were encrypted before being transmitted over the Internet.Encryption makes it very difficult to unauthorized person to view information traveling between client browser and nginx server. Create self-signed SSL certificate for Nginx. Creating Self-signed SSL Certificates on FreeBSD with OpenSSL - Stan Barber. I think it is important to use SSL certificates to protect communications over the commodity Internet, but I don’t need to spend the money for an SSL certificate when it is strictly for my personal use. 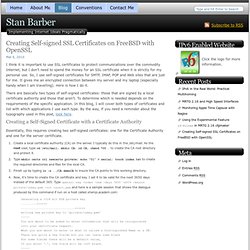 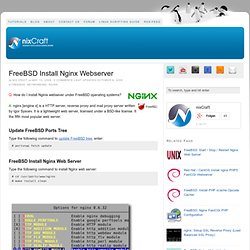 How do I install Nginix websever under FreeBSD operating systems? A. nginx [engine x] is a HTTP server, reverse proxy and mail proxy server written by Igor Sysoev. It is a lightweight web server, licensed under a BSD-like license. It the fifth most popular web server. Update FreeBSD Ports Tree Type the following command to update FreeBSD tree, enter: # portsnap fetch update.