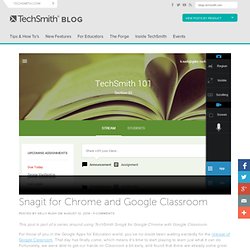 For those of you in the Google Apps for Education world, you’ve no doubt been waiting excitedly for the release of Google Classroom. That day has finally come, which means it’s time to start playing to learn just what it can do. Fortunately, we were able to get our hands on Classroom a bit early, and found that there are already some great ways to use it with Snagit for Google Chrome; let’s take a look! The first thing to keep in mind is that Google Classroom works very closely with Google Drive, which is what makes Snagit such a great match, because everything you capture with Snagit for Google Chrome automatically saves to your Google Drive. When you create a new assignment with Classroom, you can easily attach content from Google Drive to the assignment. Attaching something from Google Drive to a new assignment in Classroom. Can’t see the embedded video? Can’t see the embedded video? Boards by Janice L A. - Google Apps For Project-Based Learning. 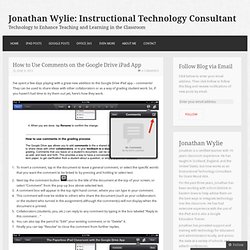 They can be used to share ideas with other collaborators or as a way of grading student work. So, if you haven’t had time to try them out yet, here’s how they work. Are you using Google Drive on your Android phone or tablet? If so, you’ll be glad to know that comments work there too and you should be able to follow the instructions above to get them to work almost exactly the same way on those devices. Like this: Like Loading... Google Apps apps Let Google Schools Be Apple Schools. As schools and districts continue to debate the best course to reach a 1:1 device goal, one big question mark continues to be how Google Apps for Education will fit the model. 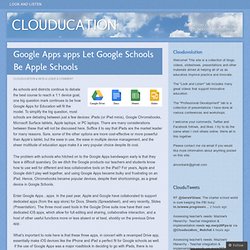 To simplify the big question, most schools are debating between just a few devices: iPads (or iPad minis), Google Chromebooks, Microsoft Surface tablets, Apple laptops, or PC laptops. There are many considerations between these that will not be discussed here, Suffice it to say that iPads are the market leader for many reasons. Sure, some of the other options are more cost-effective or more powerful than Apple’s tablet, but the ease in use, the ease in multiple device management, and the sheer multitude of education apps make it a very popular choice despite its cost. The problem with schools who hitched on to the Google Apps bandwagon early is that they face a difficult quandary.

Do we ditch the Google products our teachers and students know how to use well for different and less collaborative tools on the iPad? 23 iPad Google Apps Every Teacher Should Know about. September 2, 2014 Google has several officially released apps that teachers (and anyone else) can use on their iPads. 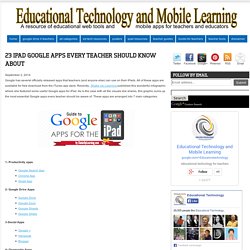 All of these apps are available for free download from the iTunes app store. Recently, Shake Up Learning published this wonderful infographic where she featured some useful Google apps for iPad. As is the case with all the visuals she shares, this graphic sums up the most essential Google apps every teacher should be aware of.

These apps are arranged into 7 main categories: 1- Productivity apps 2- Google Drive Apps3-Social Apps4- Geography Apps5- Multimedia Apps6- Photography Apps7- Other Apps This graphic is available for free download in both PDF and PNG format from this page. Introducing Classroom for Google Apps for Education.