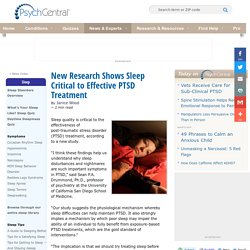 “I think these findings help us understand why sleep disturbances and nightmares are such important symptoms in PTSD,” said Sean P.A. Drummond, Ph.D., professor of psychiatry at the University of California San Diego School of Medicine. “Our study suggests the physiological mechanism whereby sleep difficulties can help maintain PTSD. It also strongly implies a mechanism by which poor sleep may impair the ability of an individual to fully benefit from exposure-based PTSD treatments, which are the gold standard of interventions.” “The implication is that we should try treating sleep before treating the daytime symptoms of PTSD and see if those who are sleeping better when they start exposure therapy derive more benefit,” said Drummond, also director of the Behavioral Sleep Medicine Program at the VA San Diego Healthcare System.

“For example, a U.S. Military Combat Related PTSD Treatment Center - The Refuge. Many veterans have trouble adjusting to civilian life; even serving on a base feels unreal after dealing with major combat situations. 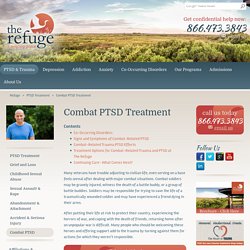 Combat soldiers may be gravely injured, witness the death of a battle buddy, or a group of battle buddies. Soldiers may be responsible for trying to save the life of a traumatically wounded soldier and may have experienced a friend dying in their arms. After putting their life at risk to protect their country, experiencing the horrors of war, and coping with the death of friends, returning home after an unpopular war is difficult. Many people who should be welcoming these heroes and offering support add to the trauma by turning against them for actions for which they weren’t responsible. get confidential help now: 866.473.3843 Email Us We aren’t prepared to cope with a terrorist attack, natural disaster, or killing others in combat. Co-Occurring Disorders: The pain and suffering you are experiencing can get better – we can help.

How PTSD Can Alter Your Brain Forever. The PTSD brains of children & soldiers - BBC News. Return from Chaos: Treating PTSD. What It Feels Like To Have PTSD. What PTSD Is Really Like. What is PTSD? (Whiteboard Video) Level Black - PTSD and the War at Home. PTSD: National Center for PTSD Home. Statistics: Depression, TBI and Suicide. The following veterans statistics are from a major study done by the RAND Corporation (full pdf of study), a study by the Congressional Research Service, the Veterans Administration, the Institute of Medicine, the US Surgeon General, and several published studies. 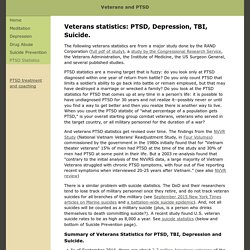 PTSD statistics are a moving target that is fuzzy: do you look only at PTSD diagnosed within one year of return from battle? Do you only count PTSD that limits a soldier's ability to go back into battle or remain employed, but that may have destroyed a marriage or wrecked a family? Do you look at the PTSD statistics for PTSD that comes up at any time in a person's life: it is possible to have undiagnosed PTSD for 30 years and not realize it--possibly never or until you find a way to get better and then you realize there is another way to live. Symptoms & Treatment. What I know... What I want to know...