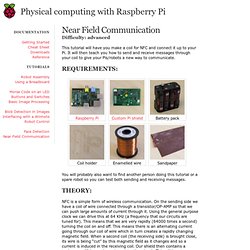 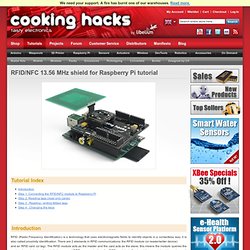 There are 2 elements in RFID communications: the RFID module (or reader/writer device) and an RFID card (or tag). The RFID module acts as the master and the card acts as the slave; this means the module queries the card and sends instructions to it. In a normal RFID communication, the RFID module is fixed and the user takes his card near it when he needs to start the interaction. USB RFID + Python + Pub-Sub (MQTT) Raspberry Pi Home Server. Raspberry Pi. Spread the knowledge create the future. Control everything with your voice. F4FIA HAM shack. Autre aspect du monitoring de serveur, c’est la consultation des logs générés par les services qui fonctionnent. 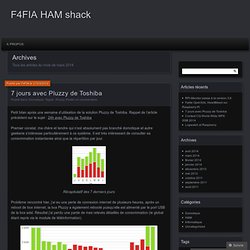 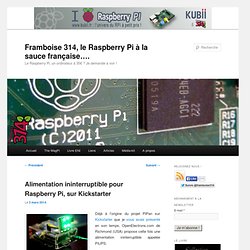 Raspberry Pi as Hi-Fi player with RuneAudio. AdWords We use AdWords to deploy digital advertising on sites supported by AdWords. 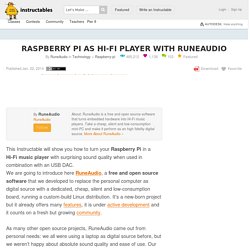 Ads are based on both AdWords data and behavioral data that we collect while you’re on our sites. The data we collect may include pages you’ve visited, trials you’ve initiated, videos you’ve played, purchases you’ve made, and your IP address or device ID. This information may be combined with data that AdWords has collected from you. We use the data that we provide to AdWords to better customize your digital advertising experience and present you with more relevant ads. Twofer Tuesday: Incredible PBX for RasPBX on BeagleBone Black and Raspberry Pi. We never were big fans of unfinished projects. 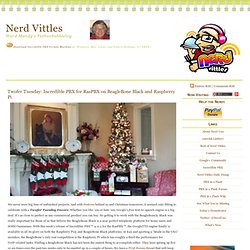 And with Festivus behind us and Christmas tomorrow, it seemed only fitting to celebrate with a Twofer Tuesday Encore. Whether you like ‘em or hate ‘em, Google’s free text-to-speech engine is a big deal. It’s as close to perfect as any commercial product you can buy. So getting it to work with the BeagleBone® Black was really important for those of us that believe the BeagleBone Black is a near perfect telephony platform for home users and SOHO businesses. Turn a Raspberry Pi into a Multi-Room Wireless Stereo. A Raspberry Pi controlled mini CNC Laser engraver [keep updating] 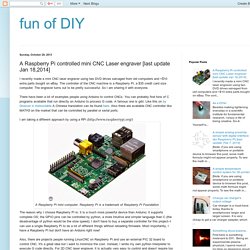 The controller of the CNC machine is a Raspberry Pi, a $35 credit card size computer. The engraver turns out to be pretty successful. So I am sharing it with everyone. There have been a lot of examples people using Arduino to control CNCs. You can probably find tons of C programs available that run directly on Arduino to process G code. Une alternative à Owncloud : AjaXplorerRaspberry Pi Home Server. Journal - Weekend Project: Solar Powered, Outdoor Raspberry Pi.

Let’s break down what we’re doing with this wiring diagram in a little more detail. 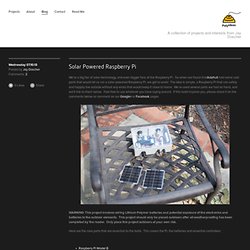 First, let’s look at this one charger, battery and panel at a time. We’re using the newer version 2 of the USB / DC / Solar Lithium Ion/Polymer charger from Adafruit. You can click through to see the example provided on the project page that shows how to wire up the solar panel, battery and load connections. PrivateEyePi – a DIY home alarm system. A big thank you to Recantha for spotting this one: PrivateEyePi is a project that went straight on my “I MUST make one of these” list when I saw it. 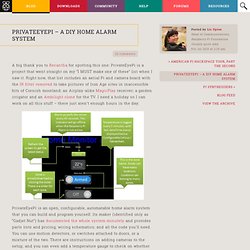 Right now, that list includes an aerial Pi and camera board with the IR filter removed to take pictures of Iron Age sites in inaccessible bits of Cornish moorland; an Airplay-alike MagicPlay receiver; a garden irrigator and an Ambilight clone for the TV. I need a holiday so I can work on all this stuff – there just aren’t enough hours in the day. PrivateEyePi is an open, configurable, automatable home alarm system that you can build and program yourself. Its maker (identified only as “Gadjet Nut”) has documented the whole system minutely and provides parts lists and pricing; wiring schematics; and all the code you’ll need. You can use motion detectors, or switches attached to doors, or a mixture of the two. Click on the images to visit the PrivateEyePi project, and let us know if you decide to hack your own alarm system together. Onion Pi. 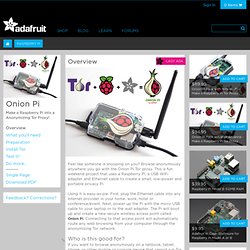 A pair of MCP3424 converters are included on the board along with an I2C buffer interface allowing you to connect additional 5V I2C devices to the same bus. The I2C address bits are selectable using the on-board jumpers. The MCP3424 supports up to 8 different I2C addresses so with two A/D converters on each Delta-Sigma Pi you can stack up to 4 Delta-Sigma Pi boards on a single Raspberry Pi giving you 32 ADC inputs. The MCP3424 contains an on-board 2.048V reference voltage with an input range of ±2.048V differentially (full scale range of 4.096V/PGA). The data rate for analogue to digital conversions is 3.75 (18 bit), 15 (16 bit), 60 (14 bit) or 240 (12 bit) samples per second. Untether Your 3-D Printer With a $35 Raspberry Pi. A RepRap controller running Pronterface on a Raspberry Pi. Photo: WDZaphod While most people still have trouble setting up an inkjet printer on a wireless network, a group of intrepid IT hackers are making big strides with far more advanced machines, using the tiny Raspberry Pi microcomputer to untether laptops from their 3-D printers.

Zachary Bales is an undergraduate studying electrical engineering and physics at Cal State Long Beach. He got into building a RepRap while acting as president of his engineering class. 3-D printing technology felt futuristic, but leaving a laptop attached to a printer for the duration of a modest five-hour print job seemed as dreadful as history class. Carrier connect shout out. Cottonpickersplace. Dr. Monk's DIY Electronics Blog: Raspberry Pi and Breadboard (Raspberry Leaf) I thought I would share this little helper I have made to simplify using the Pi with jumper wires. If you are using your Raspberry Pi with Breadboard, and you have lots of connections to make, then the Pi Cobbler from Adafruit is pretty neat. However, sometimes you only need to make a couple of connections and the Cobbler is overkill and a few Male to Female jumper leads will do just fine.

The drawback with using Male to Female jumpers direct onto the GPIO is that you then have to count down the pins trying to find the pin you need, because nothing is labelled. Matching a diagram of the pinout to the actual pins is not easy and mistakes can be made. Enter the Raspberry Leaf! To fit it onto the GPIO pins, I found it easiest to make the holes first by placing it over some breadboard and pushing a header pin through each hole in turn. Pushing it all the way down to the bottom of the GPIO connector needs tome help from a plastic tool - or if you turn off your Pi and, use a small screwdriver. So you got a Raspberry Pi: now what?

VoIP on Steroids: Introducing Incredible PBX 3.7 for the $35 Raspberry Pi. It’s been a wild ride with the $35 Raspberry Pi®. In late October, sales of the Raspberry Pi topped two million in less than two years. And, if you didn’t already know, the Raspberry Pi makes a near perfect platform for your very own VoIP PBX. It’s less than a ONE HOUR project! If you’re new to the party, imagine squeezing a 700 mHz ARM processor with 512MB of RAM, 2 USB ports, a 10/100 Ethernet port, an HDMI port, composite video, a separate audio jack, an SDHC card slot, and a micro USB port onto a motherboard the size of a credit card weighing 1.6 ounces. Adding WiFi is as simple as plugging in a USB adapter. Absolute perfection. Trust us when we say the performance of this tiny computer is nothing short of amazing.

Raspberry Pi Quick Start Guide. RPi Projects. Back to the Hub. Community Pages: Tutorials - a list of tutorials. Learn by doing. Guides - a list of informative guides. Make something useful. Faire un clone de Dropbox avec un RaspberryPi. Faire un clone de Dropbox avec un RaspberryPi Pour ceux qui ont un peu de temps cette semaine et qui veulent jouer avec leur RaspberryPi, allez faire un tour sur Instructables. How to get started with the Raspberry Pi. EVE Alpha - Raspberry Pi wireless development hardware by Ciseco. Eve is a plug in board for the Raspberry Pi mini computer A hub that connects your wireless devices to each other and the web.This is development hardware, we need your help to accelerate development of freely downloadable software.EVE is something YOU own not a service you rent. The Raspberry Pi EVE board is the reference hardware for the IoT Toolkit gateway ( It's work in progress, but will be available for general use soon.

There will be software development on EVE. The guys behind OpenRemote which is a software integration platform for residential and commercial building automation have code that will already run on the Pi. OR has end-user control interfaces for iOS and Android devices. EmonCMS which is by the guys at Open Energy Monitor will run on a Pi, John is looking at getting our sensors to log to it. We want you to join our mission to try and connect everything you own or may own in the future – regardless of who made them in the first place. Hacking the Raspberry Pi: Wearable computer and software defined radio. This marks my first real foray into actually sharing the stuff I work on with the internet.