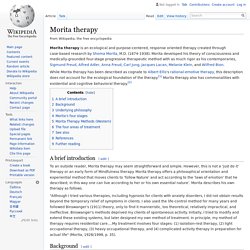 Morita developed his theory of consciousness and medically-grounded four-stage progressive therapeutic method with as much rigor as his contemporaries, Sigmund Freud, Alfred Adler, Anna Freud, Carl Jung, Jacques Lacan, Melanie Klein, and Wilfred Bion. While Morita therapy has been described as cognate to Albert Ellis's rational-emotive therapy, this description does not account for the ecological foundation of the therapy.[1] Morita therapy also has commonalities with existential and cognitive behavioral therapy.[2] A brief introduction[edit] To an outside reader, Morita therapy may seem straightforward and simple. However, this is not a ‘just do it’ therapy or an early form of Mindfulness therapy. Background[edit] Underlying philosophy[edit] Morita's four stages[edit] 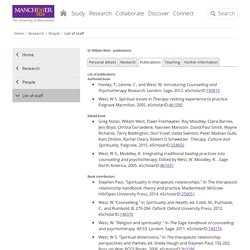 David Eagleman. David Eagleman (born April 25, 1971) is an American neuroscientist and writer at Baylor College of Medicine, where he directs the Laboratory for Perception and Action and the Initiative on Neuroscience and Law. 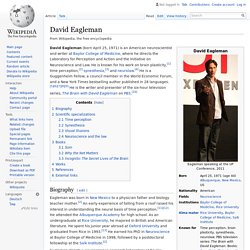 He is known for his work on brain plasticity,[1] time perception,[2] synesthesia,[3] and neurolaw.[4] He is a Guggenheim Fellow, a council member in the World Economic Forum, and a New York Times bestselling author published in 28 languages.[5][6][7][8][9] He is the writer and presenter of the six-hour television series, The Brain with David Eagleman on PBS.[10] Biography[edit] Eagleman was born in New Mexico to a physician father and biology teacher mother.[2] An early experience of falling from a roof raised his interest in understanding the neural basis of time perception.[11][12] He attended the Albuquerque Academy for high school. 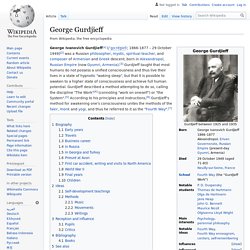 – 29 October 1949[2]), also commonly referred to as Georges Ivanovich Gurdjieff and G. I. Gurdjieff, was an influential early 20th-century mystic, philosopher, spiritual teacher, and composer of Armenian and Greek descent, born in Armenia under Russian rule.[3] Gurdjieff taught that most humans do not possess a unified mind-body consciousness and thus live their lives in a state of hypnotic "waking sleep", but that it is possible to transcend to a higher state of consciousness and achieve full human potential. Gurdjieff described a method attempting to do so, calling the discipline "The Work"[4] (connoting "work on oneself") or "the Method".[5] According to his principles and instructions,[6] Gurdjieff's method for awakening one's consciousness unites the methods of the fakir, monk or yogi, and thus he referred to it as the "Fourth Way".[7] Early years[edit] Seeker of truth[edit] After Gurdjieff's death, J.

People House. The purpose of People House is to create a space and atmosphere where everyone is accepted for who and what they are at this moment, and to enhance the possibilities of who and what they might become should they choose to expand their spiritual awareness. 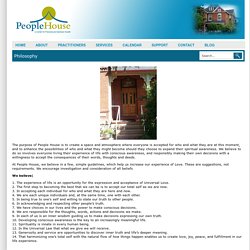 We believe to do so involves everyone living their experience of life with conscious awareness, and responsibly making their own decisions with a willingness to accept the consequences of their words, thoughts and deeds. At People House, we believe in a few, simple guidelines, which help us increase our experience of Love. These are suggestions, not requirements. We encourage investigation and consideration of all beliefs We believe¦ 1. Whose Responsibility Is It? We want to make it clear that everyone offering services at People House is an independent healing art professional in private practice and therefore is to be held solely and totally responsible to all who make use of their services.

Integrating Spirituality into Multicultural Counseling - Mary A. Fukuyama, Todd D. Sevig. 09515070.2013. Nick Totton's Page. This volume brings together 24 of Nick Totton’s articles and book chapters from the last thirteen years, all exploring in different ways the relationship between therapy, the world and society. 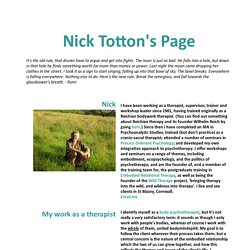 A central argument is that therapy, if it is to be effective, cannot and should not be risk-free or risk-averse. Among the themes addressed are professionalisation and regulation; the fetishisation of boundaries; democracy and therapy; intimacy; embodiment; overwhelm; and ecopsychology. Throughout, there is a two-way dialogue between therapy and politics, with each enriching the other. Nick Totton argues that therapy is intrinsically without goals, and therefore cannot usefully be harnessed to the task of relieving symptoms and getting people back to work. This also means that therapy offers a model for a different kind of politics based not on policies and demands, but on process. - See more at: - See more at: Erthworks.co.