The Biggest Problem In The World Is Our Ability To Convince Ourselves There Are No Problems. You probably think: the great problems before us today are climate change, social fragmentation, economic stagnation, lost generations of young people, decline. 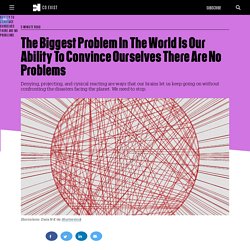 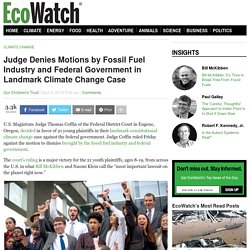 Magistrate Judge Thomas Coffin of the Federal District Court in Eugene, Oregon, decided in favor of 21 young plaintiffs in their landmark constitutional climate change case against the federal government. Judge Coffin ruled Friday against the motion to dismiss brought by the fossil fuel industry and federal government. The court’s ruling is a major victory for the 21 youth plaintiffs, ages 8-19, from across the U.S. in what Bill McKibben and Naomi Klein call the “most important lawsuit on the planet right now.”

These plaintiffs sued the federal government for violating their constitutional rights to life, liberty and property, and their right to essential public trust resources, by permitting, encouraging and otherwise enabling continued exploitation, production and combustion of fossil fuels. If your life feels grey, this Bukowski poem read by Tom Waits will breathe life back into you.

We Were Made for These Times. My friends, do not lose heart. 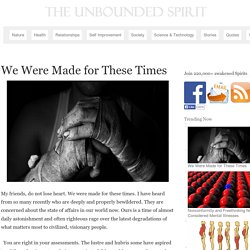 The Single Most Mind-Altering Photograph Humanity Has Ever Taken. (TruthSeekerDaily) When we see photographs of the earth from far away, the implications may not immediately be clear. 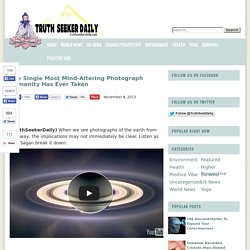 Listen as Carl Sagan break it down: This photograph of planet Earth taken by Voyager 1 was dubbed "Pale Blue Dot. " Michael Parenti: The Assassination of Julius Caesar. “Parenti . . . recreates the struggles of the late Republic with such scintillating storytelling and deeply examined historical insight.” 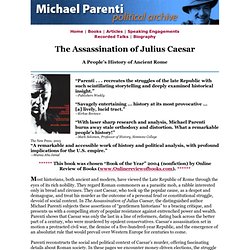 —Publishers Weekly “Savagely entertaining ... history at its most provocative ... [a] lively, lucid tract.” —Kirkus Reviews “With laser sharp research and analysis, Michael Parenti burns away stale orthodoxy and distortion. “A remarkable and accessible work of history and political analysis, with profound implications for the U.S. empire.” An Interviewer Asks An Expert What We Can Do To Stay Safer. Her Answer Is Not What I Expected. Whither Moral Courage? Thomas Paine, Our Contemporary. Portrait of Thomas Paine by Auguste Millière (1880). 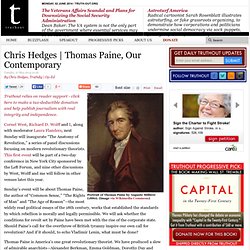 (Image via Wikimedia Commons)Truthout relies on reader support - click here to make a tax-deductible donation and help publish journalism with real integrity and independence. Cornel West, Richard D. Wolff and I, along with moderator Laura Flanders, next Sunday will inaugurate “The Anatomy of Revolution,” a series of panel discussions focusing on modern revolutionary theorists. This first event will be part of a two-day conference in New York City sponsored by the Left Forum, and nine other discussions by West, Wolff and me will follow in other venues later this year.

Sunday’s event will be about Thomas Paine, the author of “Common Sense,” “The Rights of Man” and “The Age of Reason”—the most widely read political essays of the 18th century, works that established the standards by which rebellion is morally and legally permissible. Thomas Paine is America’s one great revolutionary theorist. Paine created a new political language.

Joanna Macy: On how to prepare internally for WHATEVER comes next. “Doomers” like Albert Bates and Guy McPherson are balanced by a few who see and sense much of the same and yet internally clothe the entirety in an infinitely larger, richer light. 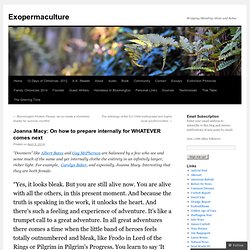 For example, Carolyn Baker, and especially, Joanna Macy. Interesting that they are both female. “Yes, it looks bleak. But you are still alive now. You are alive with all the others, in this present moment. It Looks Bleak.Big Deal, It Looks Bleak. On Staying Sane in a Suicidal Culture. Joanna Macy. 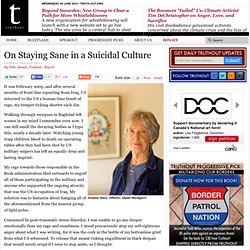 (Photo: Adam Shemper)It was February 2005, and after several months of front-line reporting from Iraq, I'd returned to the US a human time bomb of rage, my temper ticking shorter each day. Walking through morgues in Baghdad left scenes in my mind I remember even now. I can still smell the decaying bodies as I type this, nearly a decade later. Watching young Iraqi children bleed to death on operating tables after they had been shot by US military snipers has left an equally deep and lasting imprint. Unclenched. Dare To Imagine. David Abram quote. 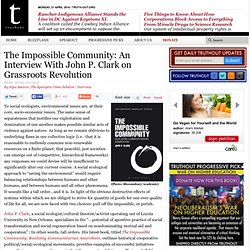 The same sense of separateness that justifies our exploitation and domination of one another makes possible similar acts of violence against nature. As long as we remain oblivious to underlying flaws in our collective logic (i.e.: that it is reasonable to endlessly consume non-renewable resources on a finite planet; that peaceful, just societies can emerge out of competitive, hierarchical frameworks) any responses we could devise will be insufficient to significantly alter our current course.