Neuroscience and Personality: Biology Meets Behavior. Neurons responsible for the particular experience of consciousness are enclosed and grouped in the intralaminar nuclei (ILN) of the thalamus. 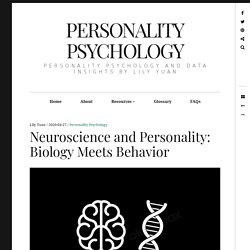 Big Five Openness Trait and Intelligence in Education. As a general rule of thumb, intelligence (i.e. 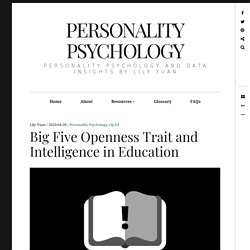 IQ) is linked to the Openness (O) trait in the Big Five. It refers to the ease of making abstract connections, considering thought processes outside of the proverbial box, and being receptive to new ideas. Creativity, as a result, appears to link to the trait. PSA: Take Your Personality Type Results With a Grain of Salt. All models are broken, some are useful.– George E. 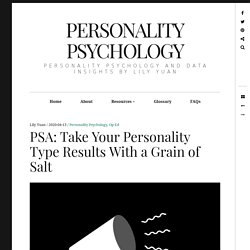 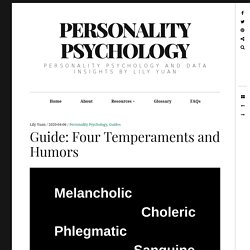 He proposed an imbalance of bodily fluids (i.e. black bile, yellow bile, phlegm, blood) results in extreme temperaments. The cure would be to let out excess fluids through surgical cuts—practices which have since been fully abandoned. Big Five Cross-Cultural Validity Issues. The Big Five, FFM (Five-Factor Model), NEO-PI-R, CANOE and OCEAN model are all synonymous to the five primary traits most cited in personality psychology research: Openness (O)Conscientiousness (C)Extraversion (E)Agreeableness (A)Neuroticism (N) Big Five’s cross-cultural validity issues can be an ostensibly tricky field to navigate as its embedded emphasis on universality may be an obstacle to further developments towards greater validity and reliability. 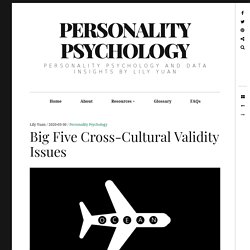 Since its official release in 1990, the FFM has earned its spot as one of the most scientifically accepted inventories of personality. Guide: 4 Main Types of Psychometric Data (B, I, S, L) Psychometric data helps psychologists and social researchers better predict what behaviors will arise from an individual’s decisions. 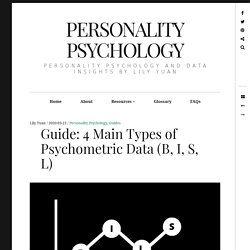 The most common thought that pops up with the mention of psychometrics is self-report data (S-data), or surveys with fill-in-the-bubble sheets. Numerical and measurable quantitative data can be transformed into reports and visualizations to drive business decisions. With more open-ended qualitative data, however, the idiosyncrasies of the subjective and complex human condition can be explored with greater accuracy. There are four distinct types of psychometric data researchers in psychology use, under different situations and experimental conditions: B-data (behavioral data)I-data (informants’ data)S-data (self-report data)L-data (life data) How Personality Influences Music Taste. 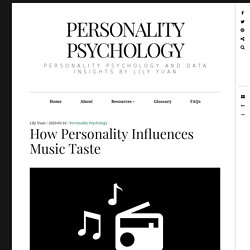 Since the earliest records of drumming, humming, or acapella arrangements, music has been an integral part of humanity. Personality and music taste are affected by factors such as culture and peer groups, and even possibly correlated by socioeconomic status. Music itself has the power to evoke an emotion and diminish another under the right context and conditions. How does personality influence music taste? Is Personality Based Upon Nature or Nurture? Personality type theories such as Jung’s eight cognitive functions (which translates to sixteen distinct types) assert that our personality is completely predetermined in the womb, and develops—healthily or unhealthily—over time. 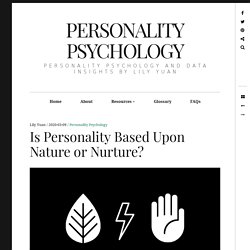 Latter-day theories gravitate toward the nurture end of the debate—and argue that under the right conditions, any individual can develop and accumulate certain traits. Essentially, the view is that behavior can be learned. Twin studies are highly sought-after and carefully analyzed, as it is one of the most accurate and ethical methods to compare and contrast the personalities of two genetically identical individuals.

The research method is known as the naturalistic observation. Personality and Diet Preferences. Whether someone prefers their tacos with extra sizzling chipotle sauce (side note: guilty as charged), or goes all out on a buffet’s cheesecake section (sorry, pants), one’s diet may significantly correlate with their personality. 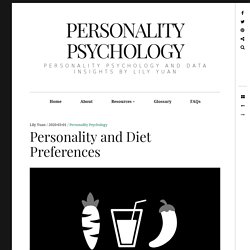 Also, individuals who stick to their diet goals over succumbing to the temptations of an extra candy bar or bowl of macaroni and cheese are likely to score high in Conscientiousness (C). Eating habits and patterns may hold some interesting correlations with our complex personalities. The dark triad of personality (i.e. Machiavellianism, Psychopathy, Narcissism) may also play a role in our dietary choices. Visual Personality Typing: Techniques and Practices. From peering into the distinct lumps of people’s heads (phrenology), facial expressions, or the lines on a palm (palmistry)—visual typing has been largely debunked as a pseudoscience. 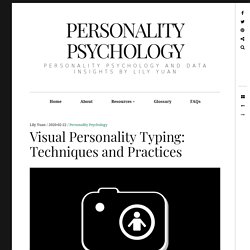 It principally draws upon the Barnum or Forer effect—by which any description is general enough to be thought of as accurate to most experiences. This gives off a believable illusion of accuracy upon first glance. Ever wonder why horoscopes always seem eerily accurate? Career Satisfaction and Personality: Assessments and Myths. “If you love your work, you’ll never have to work a single day in your life!” As the Internet rapidly reshapes 21st century work culture, career satisfaction also shifts along. Remote work, contract positions, the gig economy, and new opportunities to break free from corporate ladders appeal to many in the current workforce. Terms like moonlighting, digital influencer culture, and telecommuting are beginning to gain momentum—and suggest the rise of a completely new approach to work. The idea of a “dream job” has stuck around for decades, and gained momentum in the North American 9-5 work culture, along with other fads.

However, large-scale changes are on the way. Guide: Personality in Narrative Design. Narrative design is the umbrella term for the hierarchies, branches, maps, dialogues, and thoughts of characters in an immersive, virtual world. Animated pixels and distinct timbres of voices. Well-known and beloved characters hit the shelves and screens. Storyline-heavy games, complete with realistic dialogues, are snowballing in popularity as the middle of the 21st century approaches. Gone are the days where action and destruction take center stage—intriguing narratives now pines for the crown. “To read fiction means to play a game by which we give sense to the immensity of things that happened, are happening, or will happen in the actual world.

Philosophy and Personality: The "Self" and Identity. Playing at the intersection between science and art, philosophy and personality are intimately connected with a search for meaning and truth in both the unique and collective aspects of an identity. We have the built-in ability to be aware of our thoughts and behavior—and make decisions against our will.

The concepts to explore under philosophy and personality: The Persistence QuestionPersonhoodPersonalismAssumptions (Nature/Nurture, Uniqueness/Universality, Freedom/Determinism, Active/Reactive, Optimism/Pessimism) The Persistence Question What criteria is necessary and adequate for someone to be existing in the present moment, based on past and future characterizations of that same self? Popular sayings such as “losing yourself” in a project or witnessing individuals with dementia, for instance, having “lost his character.” Another (albeit extreme) example to consider is a patient in the vegetative state: no recollections of the past, nor awareness of the present. Personhood. Personality Theory and Intellectual Property. “Every man has the right to turn his will upon a thing or make the thing an object of his will, that is to say, to set aside the mere thing and recreate it as his own.”– Georg Wilhelm Friedrich Hegel Under the European IP property law, ideas are referred to as an “extension of oneself and of one’s personality.”

Personality theory and intellectual property are closely associated with each other to govern creative guidelines and best practices over the Internet. Digital movements such as the Creative Commons license aim to create a more open community to rework and share pieces of intellectual property to ignite awareness and recognition. The decentralized, free culture movement further emphasizes the large-scale creative collaborations. Other forms of intellectual property protection include trademarks, trade secrets, patents, as the mere ideas—often referred to as the “law of ideas.”

UX and Personality: User Personas, Design, and HCI. Psychographics and personality traits encompass the UX (user experience) realm and predict which users and customers are most likely to use and purchase a certain product or service. The growth and buzz of new brands and promotions require strategy and loyalty from customers, from the process of acquisition to sustentation. In marketing, the explosion of UX stems from the default adaptation of mobile-first design—as users are gravitating to convenience on the smaller scale.

Customer-first design in business is paramount as most purchases are now made over the Internet, with a fair amount of those being on a smartphone. “UI is the saddle, the stirrups, and the reins. Personality and Digital Media: A Look at Big Data. 5 Personality Buzzwords (And Their Synonyms) The field of personality psychology is already full of hypothetical constructs (i.e. ideas difficult to quantitatively measure), and complex jargon. Here’s a glossary for more focused terms and definitions. With the rise of hyper-niche typology groups and forums on the Internet, it’s easy for new terms and buzzwords to (mostly unknowingly) slip into common, everyday lingo. We’re hence met with a piping hot pot of a personality psychology buzzword jambalaya. Personality and Compatibility: Romantic and Platonic.

Guide: Socionics Personality Model. What is the Socionics Personality Model? Personality Psychology. Guide: Personality Disorders – The 3 Clusters. *Disclaimer: I’m not a licensed mental health professional or a psychiatrist, so please refrain from asking for personal or medical advice. Also, please avoid self-diagnosing. If you suspect a loved one may be struggling, please seek out professional help as soon as possible. There are three clusters in total which span 10 different personality disorders according to the DSM-V, a clinical psychiatric guideline to formal diagnosis and treatment. It is estimated that around 9-10% of the U.S. population has a personality disorder at any given time, but most cases are either misdiagnosed (as anxiety or depression)—or not diagnosed at all. Personality disorders are often co-morbid (i.e. existing at the same time) with other mental health conditions, such as depression.

The Dark Personality Triad: Machiavellians, Psychopaths, and Narcissists. Where every real and fictional antagonist comes into play: the Dark Triad in psychology has been a hot topic of interest. What lies behind the allure of the darker side of human nature? When does deviant behavior ultimately cross the line to be deemed as improper? Personality Psychology: Overview and Definitions. Guide: Jungian Cognitive Functions.