Once called the 'Lucky Country', our chickens are now coming home to roost. We not-so-very-clever Australians have seriously compromised the choices of future generations and are now a sitting duck for further exploitation, writes Dermot Daley. 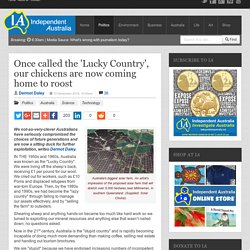 IN THE 1950s and 1960s, Australia was known as the "Lucky Country". We were living off the sheep’s back, receiving £1 per pound for our wool. We cried out for workers, such as £10 Poms and displaced refugees from war-torn Europe. Then, by the 1980s and 1990s, we had become the "lazy country" through failing to manage our assets effectively, and by "selling the farm" to outsiders. Shearing sheep and anything hands-on became too much like hard work so we turned to exploiting our mineral resources and anything else that wasn’t nailed down; no questions asked. Now in the 21st century, Australia is the "stupid country" and is rapidly becoming incapable of doing much more demanding than making coffee, selling real estate and handing out tourism brochures. Here is how this has impacted on the lives of ordinary working taxpayers. Blender.jp - Blender Japanese Website. Borja Montoro Character Design. The Spa Studio were formerly known as Animagic Studios. 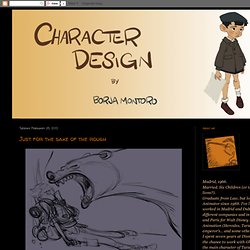 Both studios have been and are owned and directed by my good friend Sergio Pablos. I created the characters for Sergio's project under his inspirating supervision and always relaying on the help of his extraordinary draftsman skills. It was a beautiful and unforgetable time. We were both just back from our recpective Disney studios (Sergio at Burbank, as supervising animator; me in Paris, as animator) and worked hard together for a project in which we deeply believed. Pretty sadly, the movie finally didn't come up.

Anyway, I'll always thank Sergio for giving me my first chance to do visual development and character desing. This is some of the remaining art from that time. ANKYLOSING SPONDYLITIS IS CAUSED BY KLEBSIELLA. Evidence from Immunogenetic, Microbiologic, and Serologic Studies Alan Ebringer, BSc, MD, FRCP, FRACP From the Division of Biomolecular Sciences, King's College, University of London; and Department of Rheumatology, UCM School of Medicine, Middlesex Hospital, London, England. 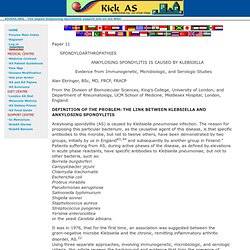 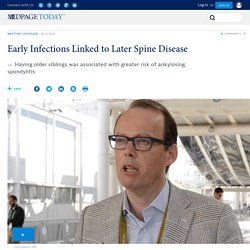 The odds ratio for being diagnosed with ankylosing spondylitis was 1.3 (95% CI 1.1-1.6) for individuals whose birth weight was below 3,000 g compared with those of normal birth weight, reported Ulf Lindstrom, PhD, of the Sahlgrenska Academy in Gothenburg, Sweden. In addition, individuals who were diagnosed with ankylosing spondylitis more often had older siblings (63% versus 58%, OR 1.3, 95% CI 1.1-1.4), which is often considered a proxy for greater exposure to childhood infections, Lindstrom said in a press conference at the annual meeting of the European League Against Rheumatism. Genetic factors have been strongly linked with ankylosing spondylitis, particularly the HLA-B27 genotype. However, twin studies have suggested that there also are likely to be environmental factors involved, as has been seen in other diseases. Slim Spurling - We have created this page as a guide to getting started with dowsing. 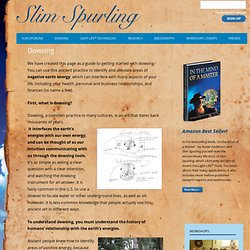 You can use this ancient practice to identify and alleviate areas of negative earth energy, which can interfere with many aspects of your life, including your health, personal and business relationships, and finances (to name a few). First, what is dowsing? Vaastu International. Dowsing for Vastu Everything in Nature is surrounded by energy fields that can be detected with dowsing. 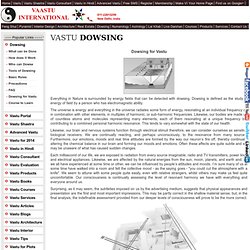 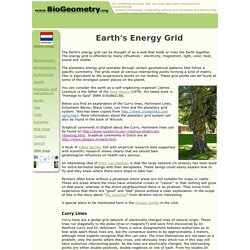 The energy grid is effected by many influences - electricity, magnetism, light, color, heat, sound and matter. The planetary energy grid operates through certain geometrical patterns that follow a specific symmetry. The grids meet at various intersecting points forming a kind of matrix. This is equivalent to the acupressure points on our bodies. These grid points can be found at some of the strongest power places on the planet. You can consider the earth as a self-organizing organism (James Lovelock is the father of the Gaia theory (1979).

Energy Vortices. Adventures in Dowsing podcast. Earth Energy. The Impact of Earth Energies on Life An Overview of the Origin of Earth Energies: The Hartmann & Curry Grids The sun ejects large quantities of charges particles from its upper atmosphere, consisting of a plasma of high-energy electrons and protons – called the Solar Wind. 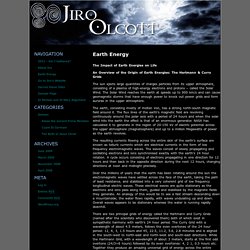 The Solar Wind reaches the earth at speeds up to 900 km/s and can cause geomagnetic storms that have enough power to knock out power grids and form auroras in the upper atmosphere. The earth, consisting mostly of molten iron, has a strong north-south magnetic field around it.