Place to find poetry and prose 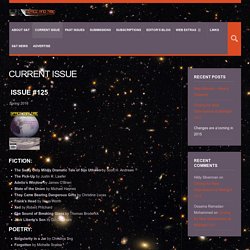 Strange Horizons, a weekly speculative fiction magazine. Home of the World's Leading Science Fiction Magazine. All Fiction. Analog Science Fiction & Fact. ...has a couple of linked, unusual, and immediately obvious traits: the cover illustrates a piece of writing by the artist himself, and that piece is a fact article, not a story. 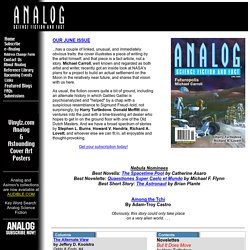 Michael Carroll, well known and regarded as both artist and writer, recently got an inside look at NASA's plans for a project to build an actual settlement on the Moon in the relatively near future, and shares that vision with us here. As usual, the fiction covers quite a bit of ground, including an alternate history in which Galileo Galilei is psychoanalyzed and "helped" by a chap with a suspicious resemblance to Sigmund Freud--told, not surprisingly, by Harry Turtledove.

Donald Moffitt also ventures into the past with a time-traveling art dealer who hopes to get in on the ground floor with one of the Old Dutch Masters. And we have a broad spectrum of stories by Stephen L. Burns, Howard V. Contrary Magazine. The Brooklyn Quarterly. Twelve Stories. McSweeney’s Internet Tendency. DecomP magazinE. MUZZLE MAGAZINE - Home. Issue 24. The Rumpus.net.