Tiny oak playhouse with a green roof, step by step. The shape of the house was determined by the curve of the roundwood timbers [see 1], as such the design for the home was a compromise between the plan and what was available in the local woodlands. 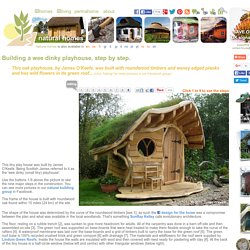 That's something SunRay Kelley calls evolutionary architecture. The floor, resting on a rubble trench [2], was sunken to give more headroom for adults. All of the carpentry was done in a barn off-site and then assembled on-site [3]. Landscape Architects Network - Revealing the environment. Florida Makes Off-Grid Living Illegal – Mandates All Homes Must Be Connected To An Electricity Grid. Robin Speronis lives off the grid in Florida, completely independent of the city’s water and electric system. 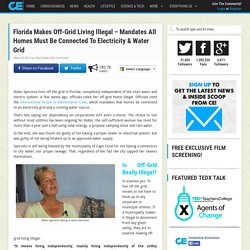 A few weeks ago, officials ruled her off-grid home illegal. Officials cited the International Property Maintenance Code, which mandates that homes be connected to an electricity grid and a running water source. That’s like saying our dependency on corporations isn’t even a choice. The choice to live without most utilities has been ongoing for Robin, the self-sufficient woman has lived for more than a year and a half using solar energy, a propane camping stove and rain water. In the end, she was found not guilty of not having a proper sewer or electrical system; but was guilty of not being hooked up to an approved water supply. Speronis is still being hassled by the municipality of Cape Coral for not having a connection to city water, nor proper sewage. Robin Speronis during a news interview. Is Off-Grid Really Illegal? In essence yes. Exploring Our Potential Beyond The Grid Sources:

Top 8 Basic Home Design Flaws - Verge Permaculture. Over the past 10 years I’ve seen a lot of mistakes in home design in both urban and rural properties. 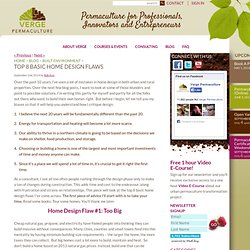 Over the next few blog posts, I want to look at some of those blunders and point to possible solutions. I’m writing this partly for myself and partly for all the folks out there who want to build their own homes right. But before I begin, let me tell you my biases so that it will help you understand how I critique design: I believe the next 20 years will be fundamentally different than the past 20. Energy for transportation and heating will become a lot more scarce. As a consultant, I see all too often people rushing through the design phase only to make a ton of changes during construction. Home Design Flaw #1: Too Big Cheap natural gas, propane, and electricity have fooled people into thinking they can build massive without consequences. I’ve lived in a 1,000 square-foot bungalow for almost 10 years now, with my wife, mother-in-law, two kids and two staff. Pretty but not practical. Battery Powered & Electric Scooters - eCo Wheelz. 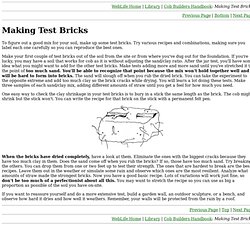 Try various recipes and combinations, making sure you label each one carefully so you can reproduce the best ones. Make your first couple of test bricks out of the soil from the site or from where you've dug out for the foundation. If you're lucky, you may have a soil that works for cob as it is without adjusting the sand/clay ratio. After the jar test, you'll have some idea what you might want to add for the other test bricks. Make tests adding more and more sand until you've stretched it to the point of too much sand. One easy way to check the clay shrinkage in your test bricks is to bury in a stick the same length as the brick.

When the bricks have dried completely, have a look at them. If you want to reassure yourself and do a more extensive test, build a garden wall, an outdoor sculpture, or a bench, and observe how hard it dries and how well it weathers. Building a Roundhouse with woodhenge and cobwood. Chemical Bamboo Preservation. Bamboo Treatment. To increase the durability of bamboo and to protect it from insects and fungal attacks, it is necessary to carry out reliable preservation of every bamboo pole. 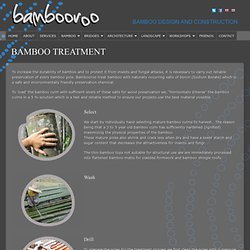 Bambooroo treat bamboo with naturally occurring salts of boron (Sodium Borate) which is a safe and environmentally friendly preservation chemical. To 'load' the bamboo culm with sufficient levels of these salts for wood preservation we, "Horizontally Emerse" the bamboo culms in a 5 % solution which is a fast and reliable method to ensure our projects use the best material possible.

Select. How to Join Bamboo. How to join bamboo, or what are the best bamboo joints? Well first of, it is important to know a few basics principles about joining bamboo before discussing the different techniques. So here goes... Do not use green, fresh cut bamboo. Bamboo has to be completely dry before using it in construction (preferable air dried). During the drying process the bamboo diameter shrinks, so when bamboo is used in joinery this will result in lose and weak joints after a few weeks.Do not use bamboo when it is less then 3 years of age.