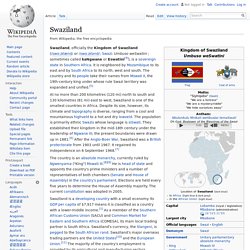 It is neighbored by Mozambique to its east and by South Africa to its north, west and south. The country and its people take their names from Mswati II, the 19th-century king under whose rule Swazi territory was expanded and unified.[5] At no more than 200 kilometres (120 mi) north to south and 130 kilometres (81 mi) east to west, Swaziland is one of the smallest countries in Africa. Despite its size, however, its climate and topography is diverse, ranging from a cool and mountainous highveld to a hot and dry lowveld. The population is primarily ethnic Swazis whose language is siSwati. Swaziland is a developing country with a small economy. History[edit] Artifacts indicating human activity dating back to the early Stone Age 200,000 years ago have been found in the Kingdom of Swaziland. South Africa. Coordinates: South Africa, officially the Republic of South Africa, is a country located at the southern tip of Africa. It has 2,798 kilometres (1,739 mi) of coastline that stretches along the South Atlantic and Indian oceans.[7][8][9] To the north lie the neighbouring countries of Namibia, Botswana and Zimbabwe; to the east are Mozambique and Swaziland; and within it lies Lesotho, an enclave surrounded by South African territory.[10] South Africa is the 25th-largest country in the world by land area, and with close to 53 million people, is the world's 24th-most populous nation.

South Africa is a multiethnic society encompassing a wide variety of cultures, languages, and religions. About 80 percent of South Africans are of black African ancestry,[3] divided among a variety of ethnic groups speaking different Bantu languages, nine of which have official status.[9] The remaining population consists of Africa's largest communities of European, Asian, and multiracial ancestry. 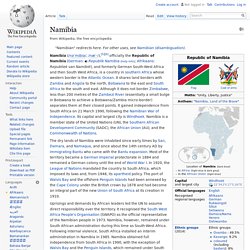 It shares land borders with Zambia and Angola to the north, Botswana to the east and South Africa to the south and east. Although it does not border Zimbabwe, less than 200 metres of the Zambezi River (essentially a small bulge in Botswana to achieve a Botswana/Zambia micro-border) separates them at their closest points. It gained independence from South Africa on 21 March 1990, following the Namibian War of Independence. 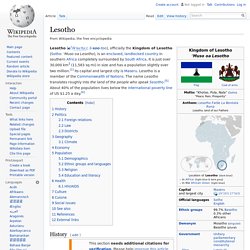 It is just over 30,000 km2 (11,583 sq mi) in size and has a population slightly over two million.[1] Its capital and largest city is Maseru. Lesotho is a member of the Commonwealth of Nations. The name Lesotho translates roughly into the land of the people who speak Sesotho.[5] About 40% of the population lives below the international poverty line of US $1.25 a day.[6] History[edit] The present Lesotho, then called Basutoland, emerged as a single polity under King Moshoeshoe I in 1822. Subsequent evolution of the state hinged on conflicts between British and Dutch colonists leaving the Cape Colony following its seizure from the French-allied Dutch by the British in 1795, and subsequently associated with the Orange River Sovereignty and subsequent Orange Free State. 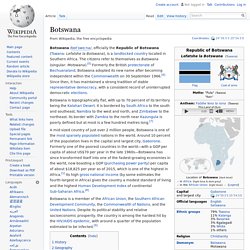 The citizens refer to themselves as Batswana (singular: Motswana).[5] Formerly the British protectorate of Bechuanaland, Botswana adopted its new name after becoming independent within the Commonwealth on 30 September 1966.[6] Since then, it has maintained a strong tradition of stable representative democracy, with a consistent record of uninterrupted democratic elections. Botswana is topographically flat, with up to 70 percent of its territory being the Kalahari Desert. Southern Africa. Geographic, including above Southern Africa is the southernmost region of the African continent, variably defined by geography or geopolitics, and including several countries. 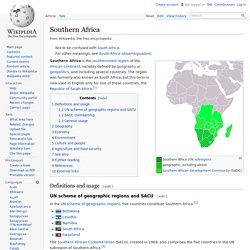