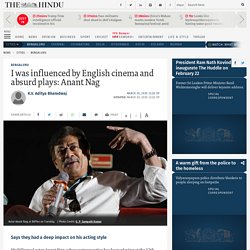 “In my initial days in Mumbai, I started with three-act Konkani plays and did a lot of comedy, and slowly joined Satyadev Dubey, Girish Karnad and others who were doing modern, absurd plays. I was also seeing a lot of cinema, both Indian and English, which offered a contrast of acting styles. I consciously chose a realistic, subtle style for myself,” he said during a conversation with senior journalist and film critic Muralidhara Khajane on Tuesday.

“Many of the directors did not get that style and taught me something else during rehearsals, but once I took to stage, I performed only in my style, to which the directors were initially resistant. But as the audience responded well to my performance, I carved out a niche,” he said. I am still angry with the gods; they cheated me big time, says Anant Nag. MANGALURU: "I am still angry with the 'gods. 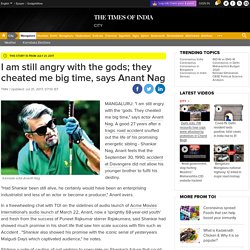 They cheated me big time," says actor Anant Nag. A good 27 years after a tragic road accident snuffed out the life of his promising energetic sibling - Shankar Nag, Anant feels that the September 30, 1990, accident at Davangere did not allow his younger brother to fulfil his destiny. "Had Shankar been still alive, he certainly would have been an enterprising industrialist and less of an actor or become a producer," Anant avers. Shankar Nag and I won awards for our films, but didn’t get the rewards we desired: Anant Nag. Acting, writing, film production and even politics, Anant Nag’s professional journey has been as diverse as it can be. 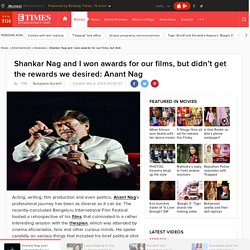 The recently-concluded Bengaluru International Film Festival hosted a retrospective of his films that culminated in a rather interesting session with the thespian, which was attended by cinema aficionados, fans and other curious minds. He spoke candidly on various things that included his brief political stint that he rarely talks about. Interview: Anant Nag speaks about his 50-year-long career in cinema.

Fifty years into a successful acting career – five years on the stage and 45 in front of the camera – Anant Nag does not feel like a movie star. 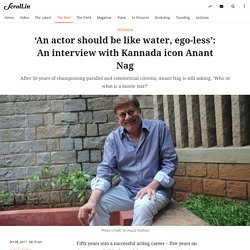 “Who or what is a movie star?” Asked the Kannada screen icon. “An actor should be like water. Ego-less. Only then can he mould his talent or fit into the skin of different characters and stories.” I was uncomfortable playing hero to younger actresses: Ananth Nag. Actor Ananth Nag has been known for his ability to make audiences laugh with his impeccable timing and dialogue delivery, and move them with his very heart-warming and serious films. 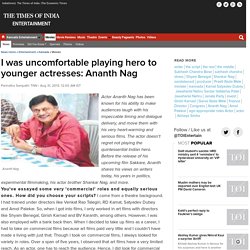 The actor doesn't regret not playing the quintessential Indian hero. Before the release of his upcoming film Sakkare, Ananth shares his views on writers today, his years in politics, experimental filmmaking, his actor brother Shankar Nag, and more.You've essayed some very 'commercial' roles and equally serious ones. How did you choose your scripts? I come from a theatre background. Shankar Nag: Life in pictures of a resonating history in Kannada theatre and cinema - Pinkvilla South. Raju Hiremath: Shankar Nag - Memories Recalled. Shankar Nag - noted Kannada film director, actor was born on Nov 9 - 1954 in Mallapur Village near Kumta, Uttara Kannada (present karwar) district in karnataka, India. 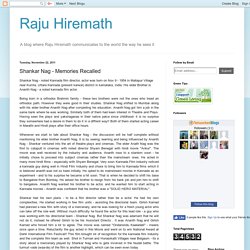 His elder Brother is Ananth Nag - a noted kannada film actor. Being born in a orthodox Brahmin family - these two brothers were not the ones who tread an orthodox path. However they were good in their studies. Blog. By Deepak Venkatesha. 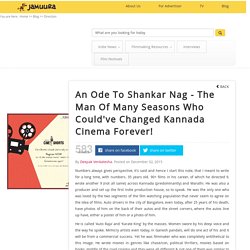 Posted on December 02, 2015 Numbers always gives perspective, it's said and hence I start this note, that I meant to write for a long time, with numbers. 35 years old. 90+ films in his career, of which he directed 9, wrote another 9 (not all same) across Kannada (predominantly) and Marathi. He was also a producer and set up the first indie production house, so to speak. He was the only one who was loved by the two segments of the film watching population that never seem to agree on the idea of films. Auto drivers in the city of Bangalore, even today, after 25 years of his death, have photos of him on the back of their autos and the street corners, where the autos line up have, either a poster of him or a photo of him.

He is called 'Auto Raja' and 'Karate King' by the masses. He was Shankar Nag (Shankar Nagarkatte) and I am writing this as my ode to the man who made me love movies & forced me to look at this profession. This was great cinema to us. Over to the POLITICIAN. Metro Plus Bangalore Chennai Hyderabad Over to the POLITICIAN `Ramakrishna Hegde and S.R. 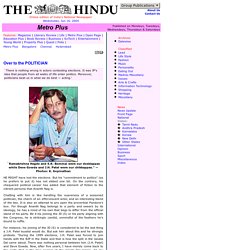 Bommai were our doddappas while Deve Gowda and J.H. Patel were our chikkappas. " — Photos: K. The final accident. T ake it as it comes was Shankar's motto. 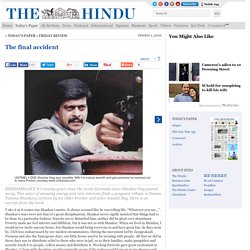 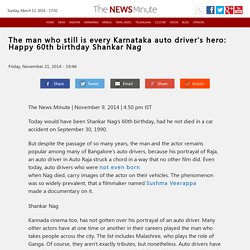 But despite the passage of so many years, the man and the actor remains popular among many of Bangalore’s auto drivers, because his portrayal of Raja, an auto driver in Auto Raja struck a chord in a way that no other film did. IT IS A RAINY EVENING in early May when I squeeze into an autorickshaw at Mathikere in north Bangalore with some friends. Electric blue lights blink above the driver’s seat; fluorescent stickers glow on the windshield; and speakers at the back play loud Kannada film music. “Where, madam?” The auto driver asks, over the blaring music, expertly turning on the auto meter with his left hand while adjusting the rearview mirror with his right.

“Cantonment,” I reply, and then, spotting the photograph of a stylish man with thick hair at the bottom-right corner of the windshield, whose features I can only dimly make out through the white, sticky flipside of the sticker, ask, “Is that Shankar Nag?” The driver smiles, and shakes his head. Shankar Nag. Team Shankarnag. ನನ್ನ ನೆನಪಿನಂಗಳದಿಂದ..: ಶಂಕರ್ ನಾಗ್ - ಒಂದು ನೆನಪು!! ಶಂಕರ್ ನಾಗ್ ಹುಟ್ಟಿದ್ದು Nov 9 - 1954.

Anant Nag at 66 is still hungry for good roles. One look at the latest stills of his upcoming film + (plus) and everybody can vouch that he can still give a run to the younger crop of actors. Director Gadda Viji, who has envisioned the new look of this veteran actor, has taken us back to his earlier days. This is Viji’s second film after Dyavre. Gadda Viji's next film has a hatke title. SHANKAR NAG: History of Shankar nag. Karnataka. In July last year I came across a Kannada book called 'Nanna tamma Shankara' (My brother Shankara) written by Anant Nag, brother of the late film maker and actor Shankar Nag. I grew up on a strong diet of Shankar's 'Malgudi Days' and was witness to the Nag brothers in the 80s via their many Kannada and Hindi movies.

It was only over the last few years that I have had the chance to properly process the impact of Shankar's untimely demise not only on Kannada cinema but also on Karnataka. Over this time period I have read a lot about Shankar's off screen life, his passionate associations with theater, his immersion in literature of Pablo Neruda and Gabriel Garcia Marquez among others and his highly ambitious visions for both Bengaluru and the rest of the state. Raju Hiremath: Shankar Nag - Memories Recalled. Frontline October 18, 2013 ANANT NAG ‘Films were bolder in the past’ ANANT NAG, unarguably one of Kannada cinema’s greatest actors, has also been one of its most recognised faces.

The “handsome-as-hell” actor has acted in more than 100 films in Kannada, Marathi, Konkani, Hindi, Tamil, Telugu and Malayalam in a career spanning over four decades. Anant Nag, 64, has also essayed roles in the television adaptation of R.K. About real life and reel lives. Malgudi Days videos by travel & culture services. Shankar Nag, auto-man for the people. Updated: Thu, Apr 11 2013. 09 10 PM IST. Team Shankarnag. Nanna Tamma Shankara: Anant Nag: Kannada Books at SapnaOnline. Remembering Shankar Nag. Kashi, actor and member of Sanket theatre recalls working with Shankar. Unique, that was Shankar Nag for me. He was a leader and a visionary, the sort I am yet to come across again.

He was ahead of his times and always had the interest of the society in mind. The final accident. Shankar Nag.