Denmark the Artist. Too big for Denmark. The North Sea Lotto. Wonderful Nature. Stop Your Meddling. This is BIKELAND. The Napoleon War. Never mess with a neat-freak! 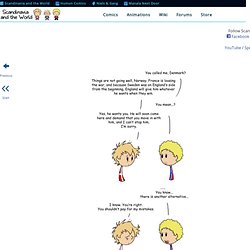 This is the main reason why Norway and Denmark still feel a bit funny about Sweden even today. HISTORY TIME! The Napoleon war was basically with France one on side and England on the other, with each of them having a number of countries supporting them. At the beginning most countries supported France, and Sweden was one of the few who supported England from the very beginning. As the war went on, more and more countries left France and went over to England, with Denmark as one of the very few who stayed with France to the bitter end. When England won, Denmark was of course seen as one of the big loosers who deserved to be punished for staying on the "evil" side, so it was seen as only fair that Sweden got Norway. Denmark agreed to do this, and Norway finally got it’s own constitution. You gotta' love how Sweden went from being one of the "good guys" to being a jerk. 21st October 2009.

Bath Time. Monkey Man. Nothing is Perfect. Sports in Finland. The Collection. Serious Sport. Sleepover at Iceland's. Who to give Flowers. Eurovision Winners. Evil Flag. Some time ago I talked with a German girl about the use of flags in Germany. 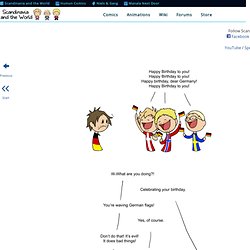 She told me that the only time it is seen as okay to be waving the German flag is at sport events and official buildings. The rest of the time the fear of feeling national pride is too big. It is in fact so bad that some Germans even feel uncomfortable when they see other countries waving it at hotels and the like. In Scandinavia we use our flags completely different, but it’s not like in North America where you see flags everywhere as a sign of national pride. Every time we have a celebration of any kind we raise the flags, because here our flags doesn’t so much symbolise national pride as much as it has become a symbol of happiness, joy and having a good time. I want oil. The Scariest Ghost Ever. English Flag. Porn for Everybody. Iron Lady. King Europe.

Eurovision Song Contest. Coffee. The Faroes. Costume Party. Awesome Hats. Boobs and a Joint. The two girls from SatW with the biggest boobs. 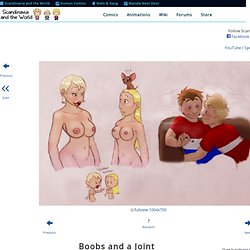 I wanted to try and draw the difference between real and fake breasts. I don’t think many people realize it, but everything about Sister Sweden is supposed to be real, from her gigantic boobs to her oversized lips. Why, yes. That is indeed Sister Sweden’s rape face. Yes, she always looks at people that way. Second picture is me sort of trolling the people who has been demanding of me that I include Holland/Netherlands in the comic. I actually have a much less...uh, suggestive comic involving the both of them in the works, because the two countries do indeed have a LOT in common, to the point of being scary. EDIT: The dog's name is Ottawa. 28th June 2010. Long Cold Nights. Swedish Politics. The political climate in Sweden. 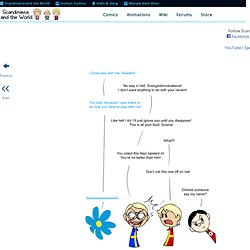 It sucks at the moment. Time for an explanation. Sweden recently got a new party voted into parliament, Sverigedemokraterna. They are known as an extremely “immigrant suspicious” party, and having them in the parliament does not suit the Swedes who have always proudly proclaimed themselves to be the least racist Scandinavian country. Especially Denmark has been called the big racists of the North because of their party Dansk Folkeparti. Sverigedemokraterna are often compared to Dansk Folkeparti, and therefore the Swedes goes back and forth between calling Sverigedemokraterna a Danish party, and a Nazi party. Stop Talking. A very Scandinavian joke. 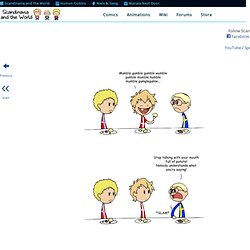 Swedes and Norwegians (and Icelanders) almost sound like they’re singing when they speak, while Danish is remarkable in that it has no accent at all. It’s very flat, not unlike German. Yet Danes are still somewhat understandable to Swedes and Norwegians, because Swedish, Norwegian and Danish are more or less the same language, so to them it sound like “Danes are speaking with a potato in their mouth” But now the secret is out. We don't actually talk like that when we're alone.

Ungodly Surprise. You can all blame the Faroe Islander Boyishy for this one. 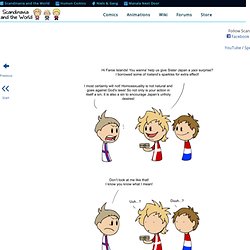 All I can say is, you have to watch your mouth when you talk with me. Originally Sweden and Åland were involved too, but I decided to break the idea into two comics. Anyway, the Faroe Islands is the most religious part of the Nordics and the one with fewest gay rights (Gay sex is allowed, but not gay marriages and adoptions, and registered partnerships are not recognized) Not all straight Faroe Islanders are of course religious and/or against homosexuality, and it’s nowhere near as bad as some of the middle eastern countries, so don’t get the wrong picture.

Unfortunately some politicians with very religious views are in charge (One wouldn’t go to a dinner with Iceland’s lesbian prime minister who had brought her wife with her). But no one is that homophobic without being in the closet... ;) How to deal with animals.