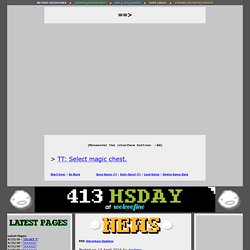 It's available here on bandcamp. It was originally featured in Clark's album, Symphony Impossible to Play. Today marks exactly seven years from the day Homestuck began. And Act 7's single-page installment marks the end of the story. Seven acts in seven years, to finish a sprawling "creation myth about kids in houses," as I would describe it for those who asked what my next project was about before I started it. The animation itself had a fairly complicated production history. It probably goes without saying, but ending this story is a personally significant moment as well.

Edit: one more thing. Posted on 8 April 2016 by Andrew Couple things! Second, all those shirt designs plus a bunch of other illustrations from Collide are also available as prints. BNPR Exclusive: Edge Nodes [Part 3] – Blender NPR. The unveil Finally, the edge nodes are here. 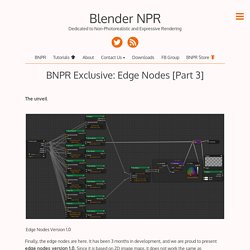 It has been 3 months in development, and we are proud to present edge nodes version 1.0. Since it is based on 2D image maps, it does not work the same as Freestyle–it does not use 3D data. Edge nodes simply exploits the already available edge detection filters within the Blender compositor. Download link to edge nodes version 1.0 UPDATE: Download Edge Node version 1.1 Disclaimer: Edge nodes is not a replacement for Freestyle or Blender’s own “Edge” post processing option, it is meant to complement them. How to use edge nodes Line set setup The essence of the setup are the line set node groups. 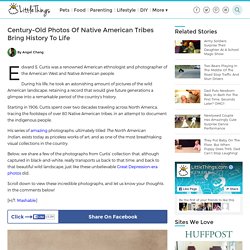 Curtis was a renowned American ethnologist and photographer of the American West and Native American people. During his life, he took an astonishing amount of pictures of the wild American landscape, retaining a record that would give future generations a glimpse into a remarkable period of the country’s history. Starting in 1906, Curtis spent over two decades traveling across North America, tracing the footsteps of over 80 Native American tribes, in an attempt to document the indigenous people. His series of amazing photographs, ultimately titled The North American Indian, exists today as priceless works of art, and as one of the most breathtaking visual collections in the country.

Below, we share a few of the photographs from Curtis’ collection that, although captured in black-and-white, really transports us back to that time, and back to that beautiful wild landscape, just like these unbelievable Great Depression–era photos did. [H/T: Mashable] Home. Complex Interior Environment Design. Sungwoo Lee has recently published a nice little 3D environment, he created for a never-released action game. 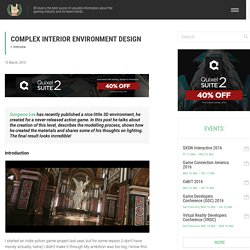 In this post he talks about the creation of this level, describes the modelling process, shows how he created the materials and shares some of his thoughts on lighting. The final result looks incredible! Introduction I started an indie action game project last year, but for some reason (I don’t have money actually, haha) I didn’t make it through.My ambition was too big, I know this is the most common mistake the indie developer makes.This is not first time I made such mistakes,but I just want a challenge. Just like I said in my artstation: A simplified background of this scene, there is a fallen cardinal (no relation with existing religion) who betrayed the gods and became a monster.

This scene is also designed for VR purpose, I think it will be cool in VR glasses.I like the feeling when the dawn light was getting through my face when I was sitting in a church. Reflections Lighting. This is What a Video Game Museum Should Look Like.

Team-lernen. Vegetation Creation for Video Games. We were fortunate enough to chat with Jobye Karmaker – an experienced environment artist, who worked in some of the biggest game studios in the world. 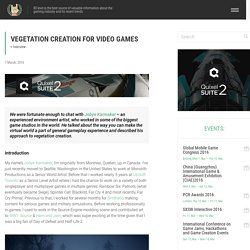 He talked about the way you can make the virtual world a part of general gameplay experience and described his approach to vegetation creation. Introduction My name’s Jobye Karmaker, I’m originally from Montreal, Quebec, up in Canada. I’ve just recently moved to Seattle, Washington in the United States to work at Monolith Productions as a Senior World Artist.

Before that I worked nearly 5 years at Ubisoft Toronto as a Senior Level Artist where I had the chance to work on a variety of both singleplayer and multiplayer games in multiple genres: Rainbow Six: Patriots (what eventually became Siege), Splinter Cell: Blacklist, Far Cry 4 and most recently, Far Cry Primal. How I broke into the industry, it was a combination of two things for me. The Creation of the Environments Environments as Part of the Gameplay Tools Oh definitely.