Specs for RF Toroids - Inductance and other parameters calculator. Micrometals - Iron Powder Cores. Toroid charts. Toroid Winding Calculator. Toroidal Winding guide. Hopefully, if you're reading this, you are working on kit building or trying to understand handling of totoids. 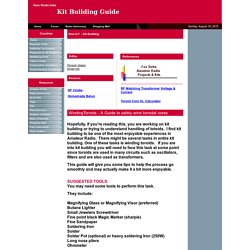 I find kit building to be one of the most enjoyable experiences in Amateur Radio. There might be saveral tasks in entire kit building. One of these tasks is winding toroids. If you are into kit building you will need to face this task at some point since toroids are used in many circuits such as oscillators, filters and are also used as transformers. This guide will give you some tips to help the process go smoothly and may actually make it a bit more enjoyable. SUGGESTED TOOLS: You may need some tools to perform this task. 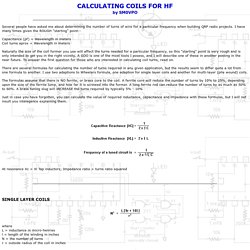 I have many times given the ROUGH "starting" point:- Capacitance (pf) = Wavelength in meters Coil turns aprox = Wavelength in meters Naturally the size of the coil former you use will affect the turns needed for a particular frequency, so this "starting" point is very rough and is only intended to get you in the right vicinity. A GDO is one of the most tools I posess, and I will describe one of these in another posting in the near future. Ferrite Core for Switching Power Supplies.

Ferrite Transformer Turns Calculation for High-Frequency SMPS Inverter. On different forums, I often find people asking for help in calculating the required turns for a ferrite transformer they are going to use in high-frequency/SMPS inverters. 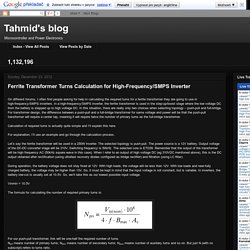 In a high-frequency/SMPS inverter, the ferrite transformer is used in the step-up/boost stage where the low voltage DC from the battery is stepped up to high voltage DC. In this situation, there are really only two choices when selecting topology – push-pull and full-bridge. For transformer design, the difference between a push-pull and a full-bridge transformer for same voltage and power will be that the push-pull transformer will require a center tap, meaning it will require twice the number of primary turns as the full-bridge transformer. Calculation of required turns is actually quite simple and I’ll explain this here. For explanation, I’ll use an example and go through the calculation process. 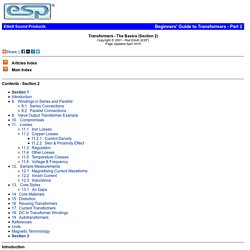 This section will concentrate a little more on the losses and calculations involved in transformer design, as well as explain in more detail where different core styles are to be preferred over others. The first topic may seem obvious, but based on the e-mails I get, this is not the case. There are several references to 'shorted turns' within this article. It is also worth noting that a transformer behaves quite differently depending upon whether it is driven from a voltage source (i.e. very low impedance, such as a transistor amp or the mains) or a current source or intermediate impedance. Three things that you need to keep in mind - always ... 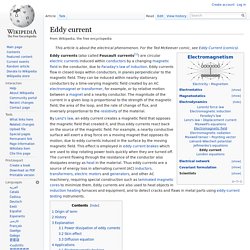 For example, a nearby conductive surface will exert a drag force on a moving magnet that opposes its motion, due to eddy currents induced in the surface by the moving magnetic field. This effect is employed in eddy current brakes which are used to stop rotating power tools quickly when they are turned off. The current flowing through the resistance of the conductor also dissipates energy as heat in the material.

Thus eddy currents are a source of energy loss in alternating current (AC) inductors, transformers, electric motors and generators, and other AC machinery, requiring special construction such as laminated magnetic cores to minimize them. Moving magnet and conductor problem. Conductor moving in a magnetic field. 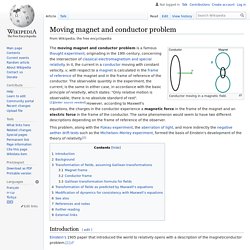 The moving magnet and conductor problem is a famous thought experiment, originating in the 19th century, concerning the intersection of classical electromagnetism and special relativity. In it, the current in a conductor moving with constant velocity, v, with respect to a magnet is calculated in the frame of reference of the magnet and in the frame of reference of the conductor. Inductance. Faraday paradox. The Faraday paradox (or Faraday's paradox) is any experiment in which Michael Faraday's law of electromagnetic induction appears to predict an incorrect result. 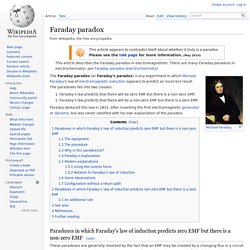 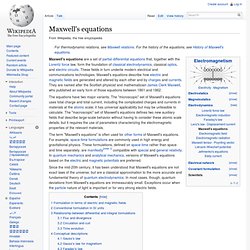 These fields in turn underlie modern electrical and communications technologies. Maxwell's equations describe how electric and magnetic fields are generated and altered by each other and by charges and currents. They are named after the Scottish physicist and mathematician James Clerk Maxwell, who published an early form of those equations between 1861 and 1862. The equations have two major variants. The "microscopic" set of Maxwell's equations uses total charge and total current, including the complicated charges and currents in materials at the atomic scale; it has universal applicability but may be unfeasible to calculate. Weber (unit) Magnetic flux. This article is about magnetic flux. 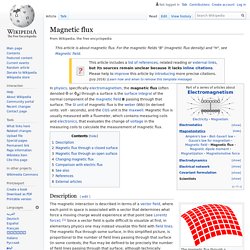 Each point on a surface is associated with a direction, called the surface normal; the magnetic flux through a point is then the component of the magnetic field along this direction. Electric field. Electric field lines emanating from a point positive electric charge suspended over an infinite sheet of conducting material. 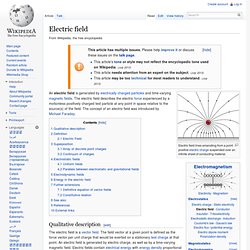 Qualitative description[edit] An electric field that changes with time, such as due to the motion of charged particles producing the field, influences the local magnetic field. That is: the electric and magnetic fields are not separate phenomena; what one observer perceives as an electric field, another observer in a different frame of reference perceives as a mixture of electric and magnetic fields. Measure Capacitors and Inductors with an Oscilloscope and some basic parts. National High Magnetic Field Laboratory - Electromagnetic Induction Tutorial. Faraday's law of induction. Faraday's law of induction is a basic law of electromagnetism predicting how a magnetic field will interact with an electric circuit to produce an electromotive force (EMF)—a phenomenon called electromagnetic induction.

It is the fundamental operating principle of transformers, inductors, and many types of electrical motors, generators and solenoids.[1][2] The Maxwell–Faraday equation is a generalisation of Faraday's law, and forms one of Maxwell's equations. Inductor. Axial lead inductors (100 µH) Overview[edit] Coils and transformers.