Turn a $12 transistor tester into a $200 - $600 Smart tweeze. ~ What's all this Trapped Charge and Dielectric Compression stuff anyhow? ~ A swept notch method was chosen rather than make an oscillator and measure its frequency because I found it difficult to make an oscillator or any measurement jig where I could apply a d.c. voltage to the capacitor(s) under test without affecting the frequency by stray C or leakage changing the bias or one that did not require other capacitors in circuit to let it function correctly The simple parallel LC notch as 'thrown together' worked very well first time and was not susceptible to the stray C when connecting and swapping the floating PSU or a battery voltage source ~ Unlike a true bridged T it does not require adjusting or matching of components ~ Pairs of similar capacitors were simply substituted and the centre frequency set to the notch with 0V applied and points A joined. 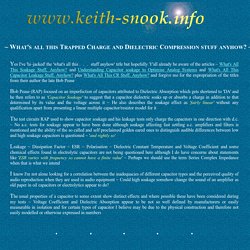 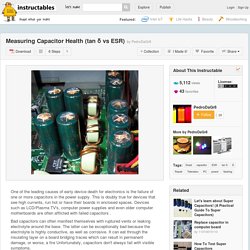 The cross-hatch in the image is a special safety vent which is designed to rupture if the internal pressure gets too high. This high pressure is caused by the generation of various gases like hydrogen as the capacitor fails and the electrolyte breaks down. There are a variety of reason why electrolytic capacitors fail. These failures can typically be broken down into five distinct reasons: I. Capacitors have a finite lifetime. II. One of the biggest enemies of electrolytic capacitors is heat! III. This is not something that the end-user can change or typically even has the equipment to measure. IV. This was a huge issue at the turn of the millennium. V. Science, Technology, Programming and Anime. Has your TV stopped turning on? 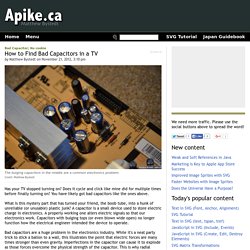 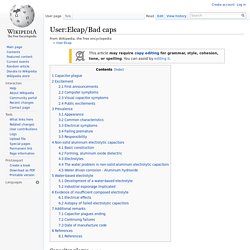 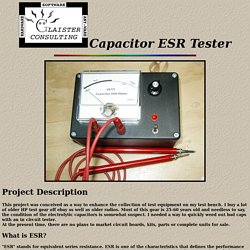 I buy a lot of older HP test gear off ebay as well as older radios. Most of this gear is 25-60 years old and needless to say, the condition of the electrolytic capacitors is somewhat suspect. I needed a way to quickly weed out bad caps with an in circuit tester. At the present time, there are no plans to market circuit boards, kits, parts or complete units for sale. Blue ESR assembly manual Jan 2015. Blue ESR Meter Circuit. ESR meter - Dick Smith - K7214. Equivalent Series Resistance Meter.

Electrolytic capacitors are by far the electronic parts that suffer aging soonest. 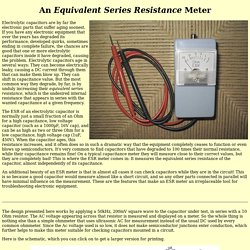 If you have any electronic equipment that over the years has degraded its performance, developed quirks, sometimes ending in complete failure, the chances are good that one or more electrolytic capacitors inside it have degraded, causing the problem. Electrolytic capacitors age in several ways: They can become electrically leaky, causing a DC current through them that can make them blow up. They can shift in capacitance value. But the most common way they degrade, by far, is by unduly increasing their equivalent series resistance, which is the undesired internal resistance that appears in series with the wanted capacitance at a given frequency. 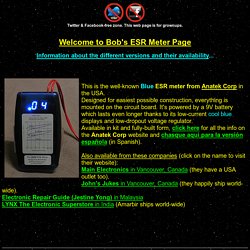 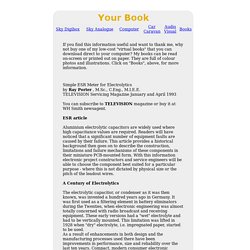 TELEVISION Servicing Magazine January and April 1993You can subscribe to TELEVISION magazine or buy it at WH Smith newsagent.ESR articleAluminium electrolytic capacitors are widely used where high capacitance values are required. Readers will have noticed that a significant number of equipment faults are caused by their failure. This article provides a historical background then goes on to describe the construction, limitations and failure mechanisms of these components in their miniature PCB-mounted form. With this information electronic project constructors and service engineers will be able to choose the component best suited for a particular purpose - where this is not dictated by physical size or the pitch of the leadout wires.A Century of ElectrolyticsThe electrolytic capacitor, or condenser as it was then known, was invented a hundred years ago in Germany. A POOR MAN'S ESR METER. ESR Tester.