North and South televised. Costume drama reviews. Screenwriter Sandy Welch’s version of Elizabeth Gaskell’s industrial novel has to be one of the best BBC classic adaptations. 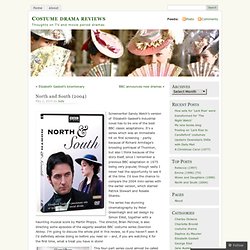 It’s a series which was an immediate hit on first screening - partly because of Richard Armitage’s brooding portrayal of Thornton, but also I think because of the story itself, since I remember a previous BBC adaptation in 1975 being very popular, though sadly I never had the opportunity to see it at the time. I’d love the chance to compare the 2004 mini-series with the earlier version, which starred Patrick Stewart and Rosalie Shanks.

The series has stunning cinematography by Peter Greenhalgh and set design by Simon Elliot, together with a haunting musical score by Martin Phipps. The director, Brian Percival, is also directing some episodes of the eagerly-awaited BBC costume series Downton Abbey. History - Ideals of Womanhood in Victorian Britain. "Ten Per Cent and No Surrender": The Preston Strike, 1853-1854 - H. I. Dutton, John Edward King - Google Books. Feminism in Gaskell’s North and South. 1860 cover,Gaskell’s North and South I have the habit of googling anything that interests me. 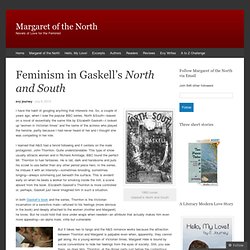 So, a couple of years ago, when I saw the popular BBC series, North &South—based on a novel of essentially the same title by Elizabeth Gaskell—I looked up “women in Victorian times” and the name of the actress who played the heroine, partly because I had never heard of her and I thought she was compelling in her role. I learned that N&S had a fervid following and it centers on the male protagonist, John Thornton. Quite understandable: This type of show usually attracts women and in Richard Armitage, BBC found the perfect Mr. Thornton to fuel fantasies. The Working-Class Woman in "North and South" [From "'What Must Not be Said': North and South and the Problem of Women's Work," by Catherine Barnes Stevenson, Professor of English, University of Hartford.] 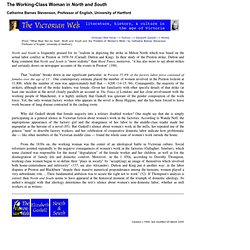 North and South is frequently praised for its "realism in depicting the strike in Milton North which was based on the actual labor conflict in Preston in 1858-54 (Carnall; Dutton and King). In their study of the Preston strike, Dutton and King comment that North and South is "more realistic" than Hard Times; moreover, "it has also more to say about strikes and certainly draws on newspaper accounts of the events in Preston" (199). That "realism" breaks down in one significant particular: in Preston 55.8% of the factory labor force consisted of females over the age of 13. .

One contemporary estimate placed the number of women involved in the Preston lockout at 11,800, while the number of men was approximately half that — 6200 (14-15; 94). Consequently, the majority of the strikers, although not of the strike leaders, was female. Analysis of The Female Visitor and the Marriage of Classes in Gaskell’s North and South by Dorice Williams Eliott. October 6, 2011 by literarydormouse Upon analysis of the mentioned article, Eliott suggests numerous ideas relating to Gaskell’s North and South that after reflecting upon provide a greater understanding when thinking about class in the book. 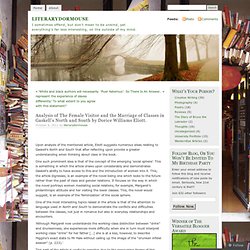 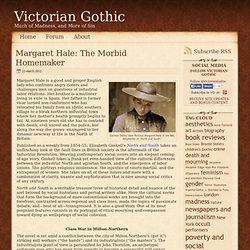 " Margaret Hale is a good and proper English lady who confronts angry rioters and challenges men on questions of industrial labor relations. Her brother is a mutineer living in exile in Spain. Her father is former vicar turned non-conformist who has relocated his family from an idyllic southern village to a bleak northern industrial town where her mother’s health promptly begins to fail. At nineteen years old she has to contend with death, civil unrest and the police, but along the way she grows enamored to her dynamic new way of life in the North of Britain.

Women, mobility and modernity in Elizabeth Gaskell's North and South. Brown - N&S Progress or decline for women? Anne Longmuir: Gaskell, Women and the Market. Historical Analysis: Women as the "the Sex" During the Victorian Era. Sex & Sexuality in the 19th Century. Wilhelm von Gloeden, 'Two Seated Sicilian Youths', about 1900.

According to their own testimonies, many people born in the Victorian age were both factually uninformed and emotionally frigid about sexual matters. Lately, evidence has shown that Victorian sex was not polarised between female distaste ('Lie back and think of England', as one mother is famously said to have counselled her anxious, newly married daughter) and extra-marital male indulgence. Male anti-masturbation device, 1880-1920. © Science Museum, London Jan Marsh.